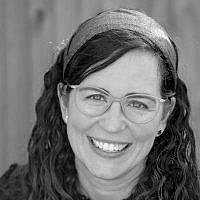 The Blogs
Amy Newman
Apply for a Blog
Advertisement
Please note that the posts on The Blogs are contributed by third parties. The opinions, facts and any media content in them are presented solely by the authors, and neither The Times of Israel nor its partners assume any responsibility for them. Please contact us in case of abuse. In case of abuse,
Report this post.

In Parshat Terumah, we read God’s instructions to Bnei Yisrael regarding the mishkan. The parsha describes the various elements that will come together to create this portable sanctuary: beams, poles, curtains, covers. The people would need all sorts of materials to build the mishkan: metals, yarn, linen, goat’s hair, animal skins, acacia wood.

Where would the wandering Hebrews find all of these materials? Regarding the acacia wood – the עֲצֵ֥י שִׁטִּֽים, which were needed for the mishkan’s poles, boards, planks, and for the ark – we find different possible answers. Ibn Ezra suggests that there was a forest of acacia trees in the desert, next to Har Sinai. Abarbanel says that merchants came to sell materials to Bnei Yisrael in the desert, including acacia wood.

Yaakov envisioned a world that was entirely different from the one in which he lived.

Rashi, citing a midrash, gives a very different answer. Shemot 26:15 reads “וְעָשִׂ֥יתָ אֶת־הַקְּרָשִׁ֖ים לַמִּשְׁכָּ֑ן עֲצֵ֥י שִׁטִּ֖ים עֹמְדִֽים” – “You shall make the planks for the Tabernacle of acacia wood, upright.” Rashi points out the definite article in the pasuk – הַקְּרָשִׁ֖ים, THE planks – and explains that pasuk calls them THE planks to indicate that specific wood had been designated for this purpose. And which wood was this? It was wood from trees Yaakov had planted in Egypt. Yaakov had prophesied that his descendants would one day build a mishkan in the desert and would need acacia wood for the project, so he planted trees and told his children to bring them along when they eventually leave Egypt. Yaakov knew that Bnei Yisrael would need them one day, and he wanted them to be ready when the moment arrived. Yaakov envisioned a world that was entirely different from the one in which he lived. He looked past his peaceful old age in Egypt, and the centuries of slavery that would follow, and the eventual Exodus, to a time when his people would need wood to build a tabernacle where they would connect with God in an entirely new way, and he did what he could to ensure they would be prepared.

Adaptive change, however, requires us to think beyond what we already know, and imagine what else might be possible. Adaptive change asks us to envision a world different from the one we know, and to see things that don’t yet exist.

Rashi cites the midrash only partially, describing Yaakov planting the trees that would eventually become part of the mishkan. According to the full text of the midrash, the trees were first planted by Avraham. Avraham, like Yaakov, foresaw that his people would one day build a tabernacle, and he planted trees in Beer Sheva for this purpose. Yaakov stopped in Beer Sheva on his way down to Egypt, uprooted the trees, and re-planted them in Egypt. In this text, it was not only Yaakov who imagined a future different from his present; Avraham did too. And this story brings to mind Miriam, who – as a midrash tells – believed she would one day have reason to rejoice; she brought timbrels out of Egypt, which she and the women used when they sang the song of the sea.

Last week, the students in the Advanced Kollel spent a week learning together via Zoom for our annual “Winter Intensive.” In a session about leadership, taught by Maya Bernstein, we discussed the ideas of technical change and adaptive change. Technical change involves using existing knowledge to arrive at concrete solutions to problems. Adaptive change, however, requires us to think beyond what we already know, and imagine what else might be possible. Adaptive change asks us to envision a world different from the one we know, and to see things that don’t yet exist.

To illustrate the difference between technical and adaptive change, Maya shared a quote attributed to Henry Ford – a man who had a few pearls of wisdom despite his dubious character. “If we’d asked people what they wanted, they would have said a faster horse.” At a moment in time when no one had ever seen a car, it was impossible for people to imagine that this new kind of motorized vehicle was possible. Some people understand this as an expression of scorn towards consumers who lack imagination, but I read it as admiration for those who are able to imagine possibilities beyond just a faster horse.

Our biblical patriarchs and matriarchs had the gift of nevuah to help them see what lay ahead, and they had the faith, courage, and optimism to take the practical steps to bring these possibilities to life. As ordinary humans, without the gift of prophecy, we have to work harder to imagine a world different than the one we know, and to let go of the assumptions and constraints that keep us stuck in the present.

The wisdom of the Torah pushes us to see more than just a faster horse. It urges us to move from the realm of the technical and to imagine societies and structures that don’t yet exist in order to bring about meaningful, adaptive change.

About the Author
Amy Newman has been a teacher in Jewish day schools for fifteen years, and has taught every grade from kindergarten through twelfth. Currently, Amy is a teacher and instructional coach at Schechter Boston. Previously she worked at Gann Academy: the New Jewish High School of Greater Boston, and the Ramaz School. Amy has a BA in Jewish Studies from McGill University, an EdM in Learning and Teaching from Harvard Graduate School of Education, and is a graduate of the Drisha Scholars Circle.
Related Topics
Related Posts
Comments