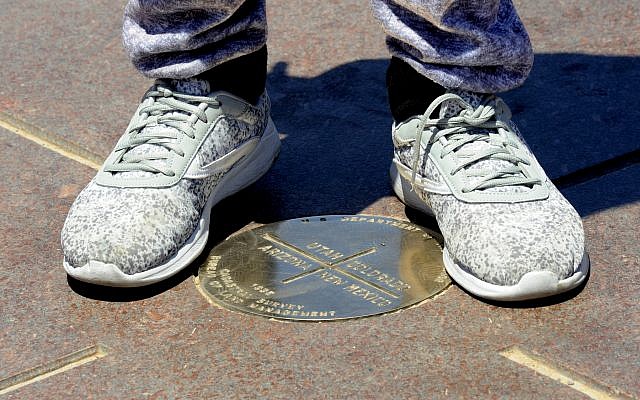 Crossing state boundaries was a big deal in the Luxner household. As a little boy growing up in Florida, I remember my father gleefully shouting, “Welcome to Georgia,” as our ‘70 Ford LTD sped past an imaginary line on the asphalt on our way to visit mishpocheh up in New York.

Nearly a decade later, as a 17-year-old volunteer on Kibbutz Ketura, I wandered off alone one evening, eager to see what Israel’s forbidden frontier with Jordan looked like. After trekking eastward through the southern Negev Desert for nearly an hour, I arrived at a small barbed-wire fence, poked my foot under it — just so I could say I’d been in enemy territory — then trudged back to Ketura, thrilled with my secret little adventure. (It wasn’t so thrilling the next morning, after my footprints had set off a terrorist alert up and down the Arava Valley). 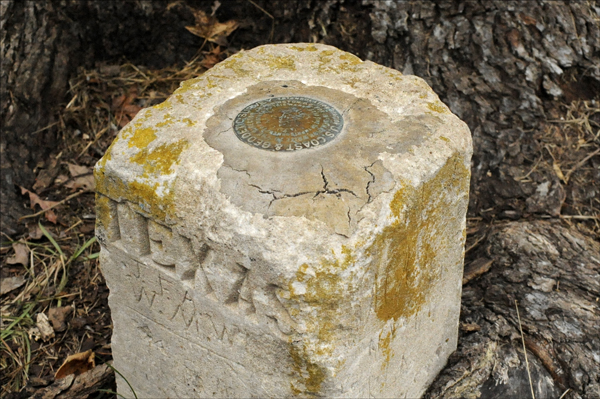 Then in the mid-1990s, while chasing down a story about Hezbollah terrorists operating in South America’s notorious tri-border area, I stumbled upon my first tripoint: the famous Marco das Trés Fronteiras — a green, yellow and blue striped obelisk marking the confluence of the Iguaçú and Paraná rivers, as well as the meeting point of Argentina, Brazil and Paraguay.

In December 2016, about a month before making aliyah, I set off on a cross-country adventure in my 2007 Lexus, hoping to see the “real” America. A lonely stretch along a gravel road northwest of the Louisiana oil-drilling town of Rodessa quickly turned into a treasure hunt for the spot where Louisiana, Texas and Arkansas come together. With no GPS to rely on, and the sun low on the afternoon horizon, I asked the tattooed driver of a battered green pickup truck emerging from Magnolia’s — a nearby saloon — if there was some sort of monument marking the tripoint.

“Sure is,” the southerner drawled as he pointed to an oak tree in the distance. “Under that tree there’s an engraved stone marker. See it? Y’all can stand in front of it, put yer left foot in Arkansas, yer right foot in Louisiana, and piss all over Texas!” 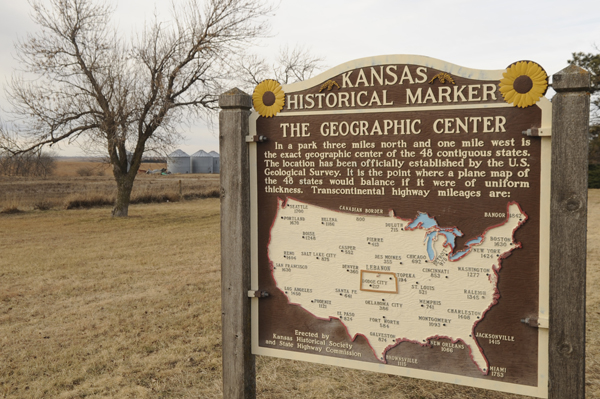 A plaque near Lebanon, Kansas, marks the geographic center of the 48 states. (Larry Luxner)

That didn’t happen, though I did take a memorable selfie with the crumbling stone. Only two weeks later, heading back east on that same cross-country trip, I happily checked off another milestone on my bucket list: a visit to the geographical center of the 48 contiguous US states, located at 39˚50’ N, longitude 98˚35’ W northwest of Lebanon, Kansas.

A few months ago, while visiting Bratislava — where the Chatam Sofer, one of the most famous rabbis in Jewish history, is buried in an underground cemetery, a Slovak friend drove me a few kilometers out of town to see a very different kind of shrine: the stone monument where Austria, Hungary and the former Czechoslovakia touch.

Standing there in that empty cornfield contemplating my first European tripoint, as wind turbines silently turned in the distance, I imagined myself back in the 1960s, attempting to outrun rifle-toting Hungarian border guards, while running across the Iron Curtain to freedom in Austria. 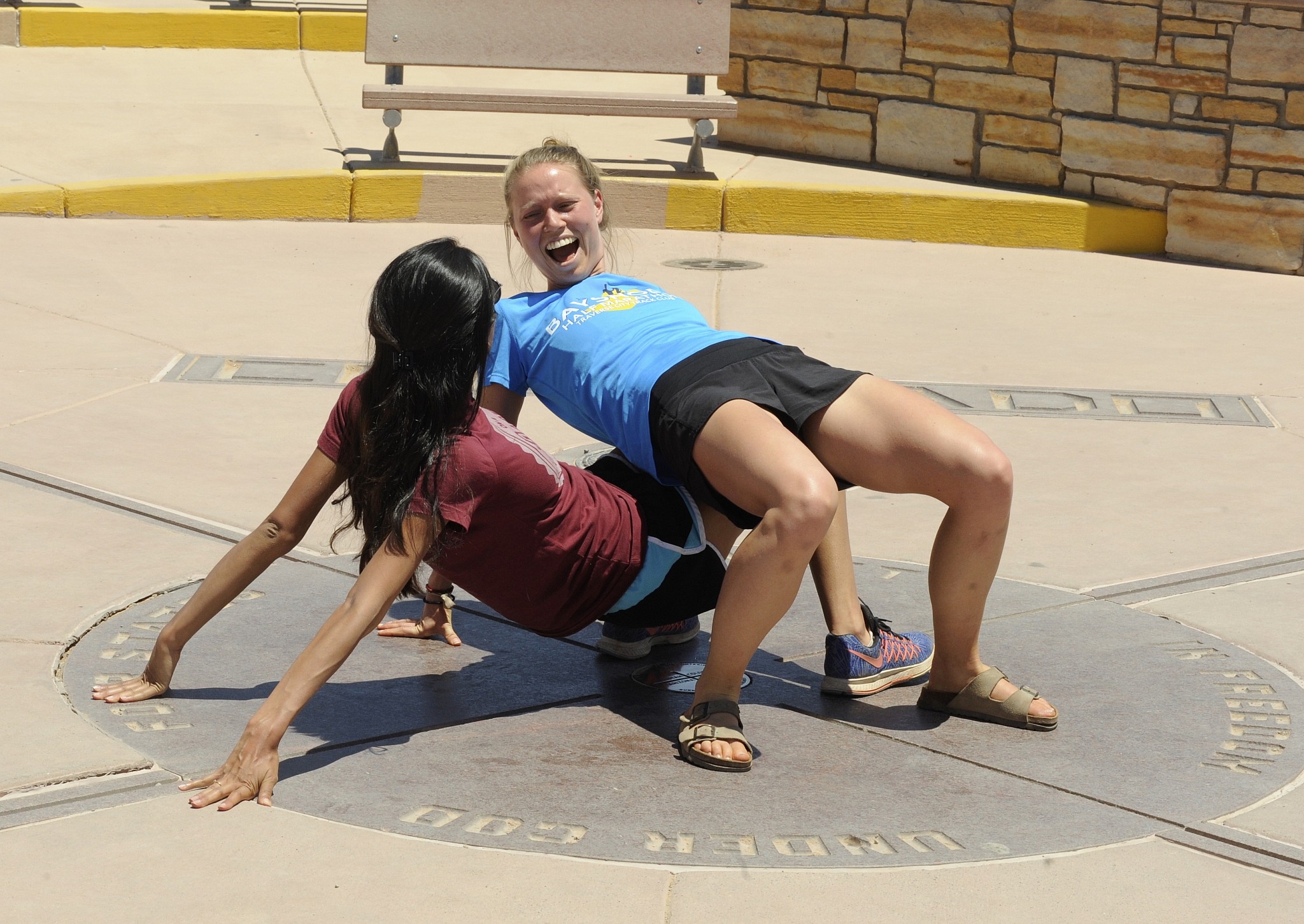 Yet the Holy Grail of borders — and North America’s sole quadripoint — is Four Corners National Monument. Here, at a desolate patch of desert about six miles northeast of Teec Nos Pos, Arizona, is the only place you can stand, sit, squat or lie flat across four states at once: Arizona, Colorado, New Mexico and Utah.

For years, I’d looked longingly at that imaginary intersection on US highway maps, hoping to do just that. Last week, after covering a muscular dystrophy conference in suburban Phoenix, I finally got my chance — and ended up spending the ensuing three days in the Four Corners region, which is almost entirely under the jurisdiction of two Indian tribes: the Navajo Nation and the Ute Mountain Ute Tribe.

Leaving Cortez, Colorado, early one morning, I drove my rented Ford Fiesta along desolate US Highway 160 for about 40 miles, then turned off a side road and entered the monument from New Mexico, the only one of the four states with direct highway access. There’s a $5.00 admission fee, and the gatekeeper accepts Visa. At the entrance, a sign warned that “dispersing of cremation ash on tribal park land is prohibited,” since cremation is seen as malicious desecration in the Navajo religion. 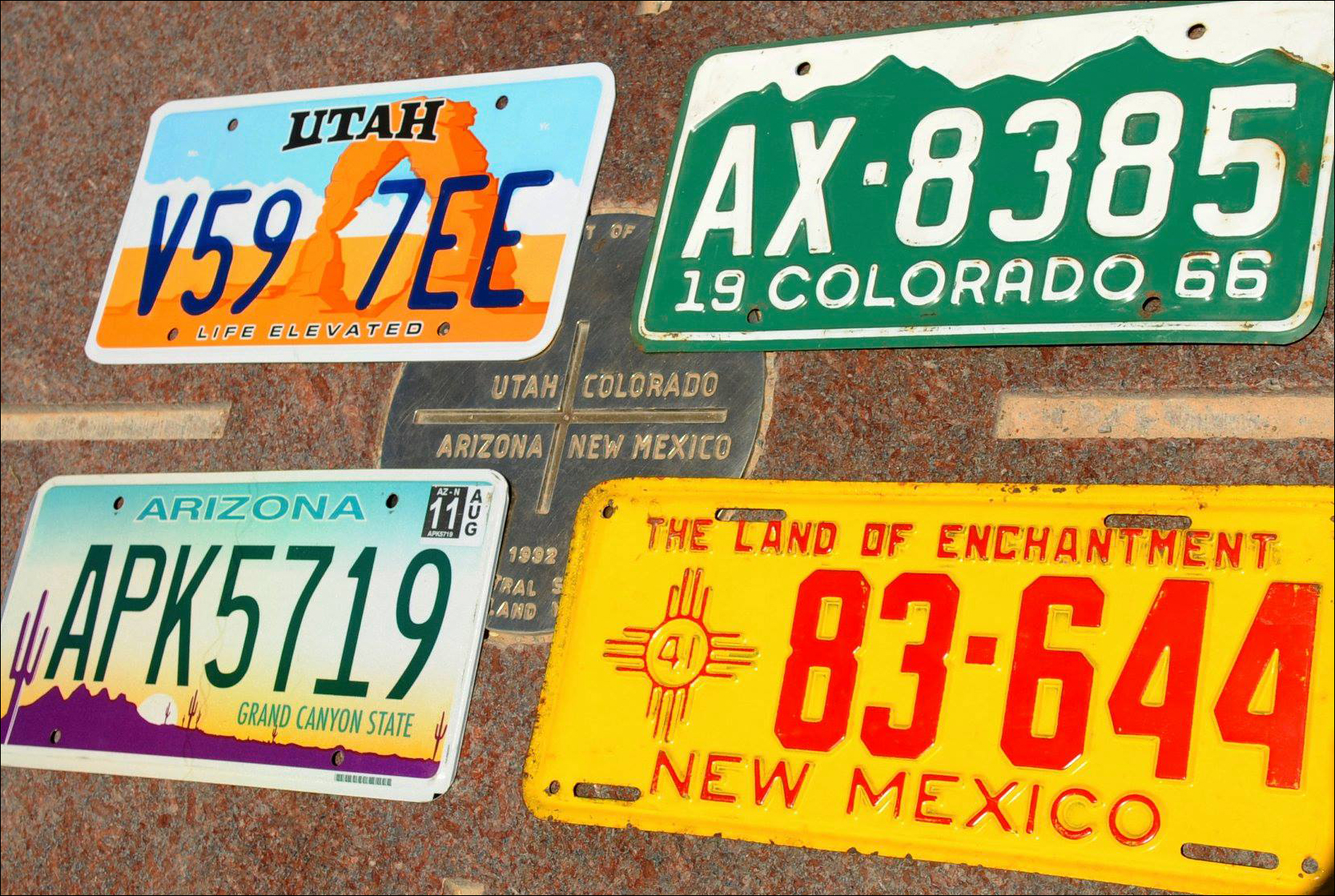 Aiming for creativity, I brought a few license plates from my collection to Four Corners National Monument and carefully placed them in the states that issued them. (Larry Luxner)

For such an isolated place, Four Corners was truly packed. About 60 tourists waited in the boiling sun to have their pictures taken (“Limit: 3 Photos,” another sign warned) standing on the granite and bronze marker where the four states legally meet. While anticipating my turn, I schmoozed with a group of Christian teens in blue T-shirts on their way back home to Yakima, Washington, from a church trip to Houston, as well as a Colorado woman in her late 60s who now lives in San Diego.

“My husband died a year ago. We used to stop by here, and this is my way to keep the memories alive,” the lady told me. “But would I come back again? No.”

Walking around the monument’s circular perimeter — and covering all four states in less than five minutes — I counted no less than 50 vendors peddling a dazzling variety of tchotchkes. These included made-in-China souvenir shot glasses, fridge magnets, Navajo horsehair pottery, native jewelry, tapestries, crucifixes and Four Corners T-shirts assembled in Nicaragua. According to Rose Adakar — whose stall happens to straddle the Arizona-New Mexico state line — all the vendors are Navajo like her, except for one Hopi married to a Navajo. 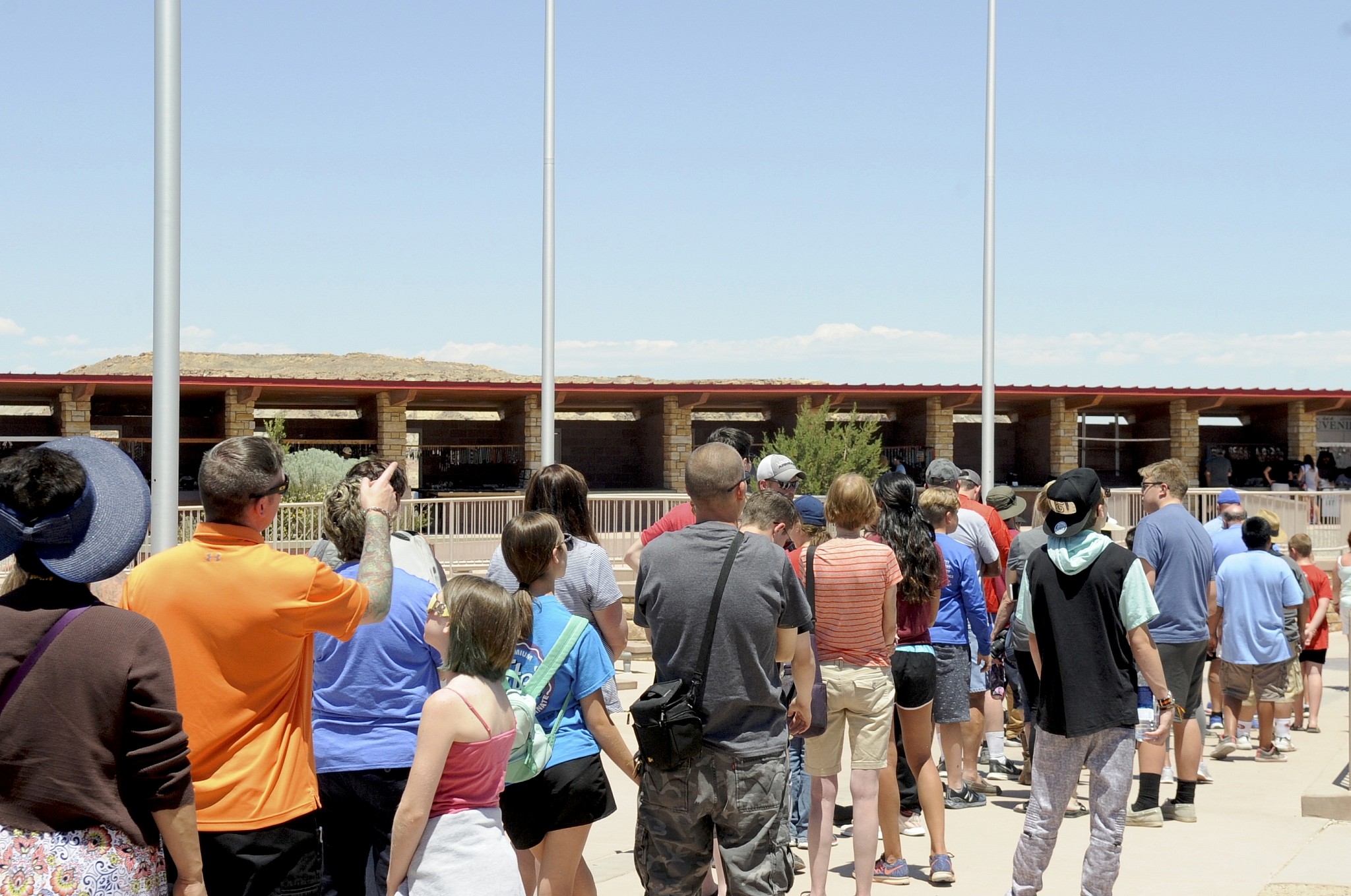 Visitors wait patiently to be photographed in all four states at the Four Corners National Monument. (Larry Luxner)

“Summertime, it’s very busy,” said the vendor, who is there seven days a week selling her wares. “But in winter, there’s hardly anyone here. You can have the place to yourself.”

A stone plaque near Rose’s souvenir stand notes that back in 1868, Ehud N. Darling surveyed the 37th parallel delineating the border between Colorado and New Mexico. Seven years later, Chandler Robbins was contracted to survey the 109th parallel west marking New Mexico’s western boundary. The point at which those two lines intersected became the Four Corners, and the monument’s centerpiece is an eight-inch-wide tablet about three inches thick and made from a highly durable, corrosion-resistant aluminum-bronze alloy.

A few yards away from the souvenir shops, food vendors with names like “Navajo Taco” and “Grandma’s Frybread Shack” hawk burritos and cold drinks to hungry, sweaty travelers. 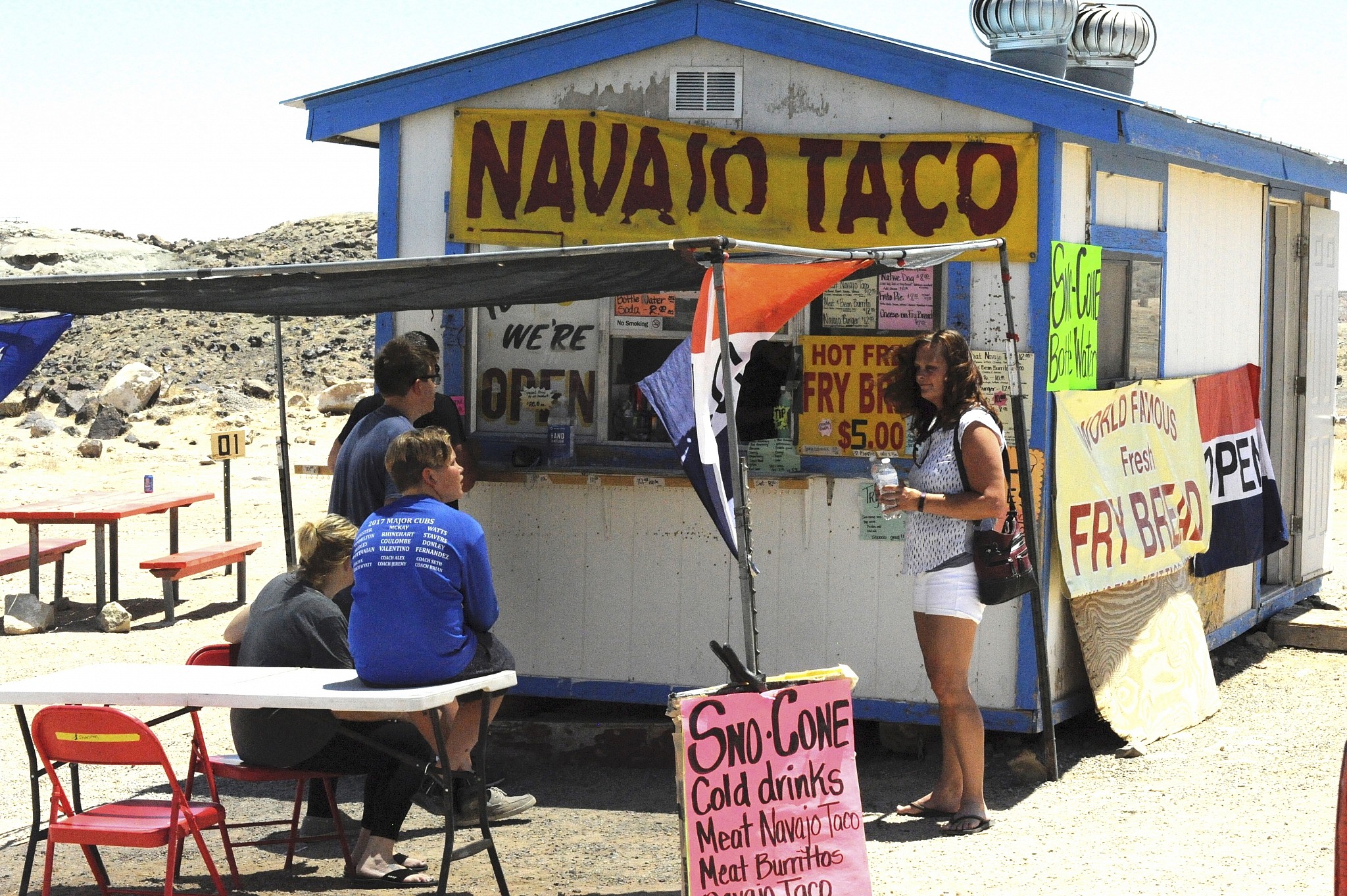 Curiously, while the Four Corners region boasts a variety of tourist attractions, the monument isn’t even mentioned in the Summer 2018 edition of TravelHost, a local flyer. Far more popular is Mesa Verde National Park in southwestern Colorado, Monument Valley — whose other-worldly rock formations rise from the desert along the Arizona-Utah border — and Arches National Park in southeastern Utah, which contains more than 2,000 natural rock arches.

One thing you certainly won’t find much of in the Four Corners is yiddishkeit. While Phoenix and Denver both have sizeable Jewish communities, individual Jews are few and far between in this part of the Southwest, and the only synagogue within a 200-mile radius is Congregation Har Shalom — a Reform temple in Durango, Colorado.

“Congregants often travel over one hour to attend services and participate in Jewish community events,” says the shul’s website. “Because Durango is home to many notable tourist attractions, we are frequent hosts to visitors searching for a Jewish connection during their travels.”

Things are generally quiet here, except for the occasional forest fire; in fact, one raging while I was in the vicinity forced Har Shalom to move both of its Torah scrolls to New Mexico for safekeeping. Nor is anti-Semitism much of an issue. If anything, the Jewish state enjoys strong support in the Four Corners region, whose predominantly evangelist Christian inhabitants are staunchly pro-Israel. 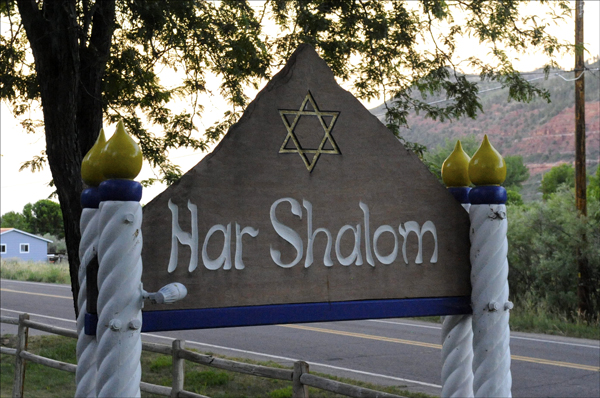 Congregation Har Shalom in Durango, Colorado, is the only Jewish house of worship in a 200-mile radius of Four Corners National Monument. (Larry Luxner)

“We as a congregation have never felt threatened,” said Har Shalom’s president-elect, Naomi Azulai. “Our biggest threat is skateboarders on our property.”

So now that I’ve stood on Arizona, Colorado, New Mexico and Utah at once, what geographical oddity could possibly be more exciting?

Actually, two places come to mind, and neither are very far from home: the exact spot where Israel, Syria and Jordan meet near Hamat Gader, and — about an hour’s drive north along the western edge of the Golan Heights — the tripoint of Israel, Syria and Lebanon.

But given the horrific civil war in Syria and the reality that I’m no longer a teenage kibbutz volunteer looking for trouble, those nearby conquests will have to wait for more peaceful times.