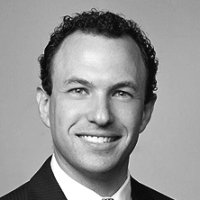 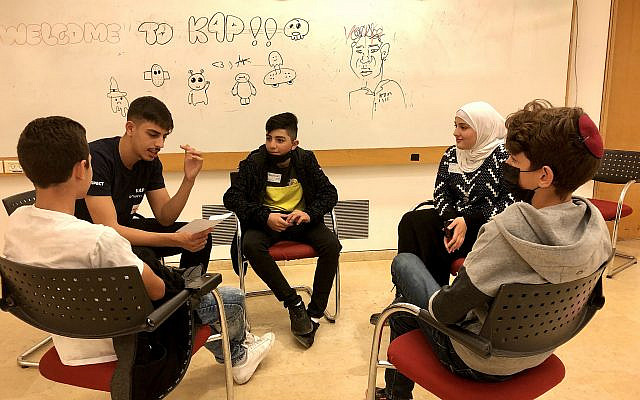 By the time I got to the large community building just steps from Jerusalem’s Old City walls on a cool December evening last year, I had been waiting to see Kids4Peace, a program of Seeds of Peace since 2020, in action for a very long time. A couple years earlier, I had been impressed when their group joined a delegation from the Alliance for Middle East Peace (ALLMEP) in Washington to meet with lawmakers and diplomats, all of whom were spellbound by these kids.

At the time, peace talks had collapsed amid a series of stabbing attacks, many by young people (in some cases, in the very neighborhoods where these kids lived). Yet these Israelis and Palestinians talked about how they met regularly in Jerusalem to learn about each other, discuss the most difficult of issues, and build the most unlikely of friendships.

Their words in those meetings mattered. Based in part on their presentation, US officials made special efforts to ensure that the Quartet’s 2016 report concluded by calling for more investment in exactly these kinds of people-to-people encounters to “strengthen the foundations for peace and countering extremism.”

Though it was by now years later, tensions in Jerusalem — just minutes away from me in Sheikh Jarrakh — were palpable once again. As I approached the building where Kids4Peace meets, I wondered what impact the storm outside might have on the middle school and high school students gathering tonight. What does a program engaging Israeli and Palestinian, Arab, Jewish, and Muslim youth in Jerusalem look like when some of their peers are facing off on the streets?

Around the corner, a world apart

That evening, two groups were meeting. On one side of the hall was a group of kids from 6th and 7th grades. Across the way were 8th and 9th graders. In the hallway between them stood a small table with light snacks and drinks. The focus of the evening sounded ambitious for any group this age: teaching them how to debate respectfully.

The atmosphere was relaxed and cozy. As the kids began to trickle in, they’d get a high five, a hug, or a “how’s it going” from one of the young adult counselors. True to their age, they all reacted to these greetings differently. Some offered a nonchalant shrug or a quiet look around the room. Others returned a wide smile or an enthusiastic gesture. Some came in twos or threes from a carpool; others came on their own.

Less obvious but equally important: Some had come from just around the corner while others had to travel an hour or two through the stress and uncertainty of military checkpoints. Some of the Jewish boys wore a kippah on their heads while one of the Muslim girls wore a hijab. The statistics — and anyone who lives here — could tell you that if not for the trailblazing work of this program, it’s unlikely these kids would ever have a chance to meet.

The evening launched with icebreakers. The younger kids began a game, where each person had a word taped to their backs to identify who or what they were. Everyone else would walk around the room and give them clues to help them guess their identity. As the kids stumbled around in search of clues, giggles and laughter bounced off the walls. 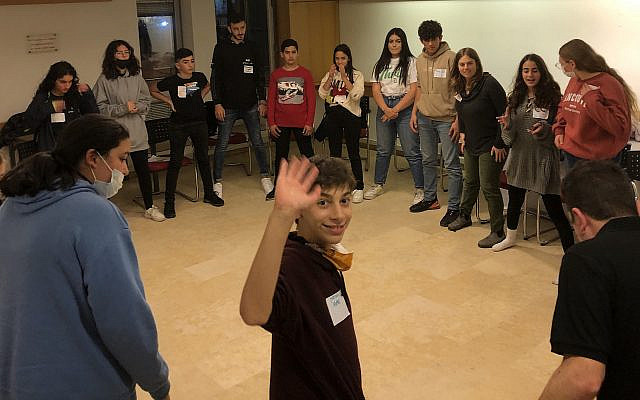 Middle school and high school students from across Jerusalem’s communities at a regular Kids4Peace meet-up. Courtesy of Kids4Peace.

On the surface, I simply couldn’t help but smile. These kids were having a blast. They navigated the room and interacted without regard to who they were, where they came from, or how the society outside would label them. People outside would be in shock or outrage to see this, but in here it was just plain fun.

It seemed to me the game was full of meaning, too. It was a reminder about the identities we carry inside versus the ones we wear on the outside, not to mention how we sometimes need a community to help us figure out who we really are. What community we choose can make a big difference in who we become. These kids had found a community like none other.

As the game continued among the younger group, I ducked out and crossed the hall, quietly opening the door to the senior program in progress. The eighth and ninth graders here were sitting on chairs in a big circle around the room with two facing each other in the center, one marked “agree” and the other “disagree.” When I walked in, the room was full of lively conversation. Something was under intense debate.

It quickly became clear what the raucous excitement was all about: Barcelona or Real Madrid? The kids in the center were debating each other, and everyone around the room was listening and cheering them on. When someone in the larger circle thought they could do better, they would tap a shoulder to take one of the places at the center. And that was just the start. The next hot topic: Instagram vs. TikTok. And then: Tel Aviv vs. Ramallah.

As needed, Yarden and Mohammed, the Israeli and Palestinian counselors, provided help with real-time translation into Hebrew and Arabic. And soon they introduced new rules: No shouting. No interrupting the other person. Before you respond, first you have to repeat what your debate partner just said. And always refer to your opponent respectfully as Mr. or Ms.

More topics followed in debates for-or-against: Everyone should be vegetarian! Mixed-gender schools are better! Parents should be able to read everything on their kids’ phones!

Watching from the sidelines, it was clear what was happening. First, the kids were re-aligning themselves, not along national or religious lines but based on their ideas. Second, they were learning tools for engaging in respectful debate. And third, they had a chance to reflect on how it felt to play different roles and engage with each other in different ways.

A little later, the kids took on more issues. They broke into small groups to consider various ethical dilemmas they might encounter in their teenage lives: Should you invite your whole class to a party? What do you do if you find money on the street? What to do if a student cheats on an important test? Again, a thoughtful conversation followed: How did it feel to disagree with people? Was it harder or easier to disagree with someone of your own or a different religion? Do you learn more from people with whom you agree or disagree?

These were just a couple segments of a lively two-hour evening program, which concluded with talk of Hanukkah and Christmas celebrations and everyone singing the Kids4Peace song. Before parting ways, the students exchanged more hugs and high-fives goodbye as they filtered out of the room.

When they return after winter break, the journey continues. With this early work under their belts, some of the issues will become a bit more challenging, focusing on conflicts, leadership, role models and, of course, national narratives.

What the kids say

Seeing the program in action, it speaks for itself. It’s obvious that these kids are getting not only a high-caliber evening activity but also best-in-class leadership development, an opportunity to meet extremely diverse peers, and a chance to work together to sift through issues that several generations of adults have not managed to solve.

Youth who have gone through Kids4Peace talk about a transformative experience. When he was a 9th grader, Jewish alum Evyatar explained that he joined the group to “learn about ‘the other side’ for myself,” and soon “it wasn’t ‘the other side’ to me anymore. Because of the Palestinian friends I’ve made through K4P, I don’t see it as an ‘us against them’ thing anymore.” He says it’s “really special that we can talk about hard topics… we can be such close friends and respect one another deeply even if we have different opinions and beliefs.”

Another alum, Kareem, a Palestinian Muslim, said when he was a 9th grader that the program enabled him and his Kids4Peace friends to hear and tell stories grounded in each other’s very different realities. “[T]elling your story shows them and gives them an experience that is stronger than their illogical misinterpretations.” Indeed, while some on the outside accuse these programs of ignoring the conflict, they are nearly the only places where people can share their realities with the other side and advocate for allies and change.

What these young people do every week at Kids4Peace Jerusalem is often not easy or popular. Yet those who participate — and their parents — seem to have discovered its rewards and know what an opportunity it presents. They walk away with relationships and skills that are simply unheard of in today’s reality.

And if they have a little more hope than most, it’s not from naivete. Quite the contrary, it’s because they’re grounded in reality. Unlike most of their peers, they enter adulthood prepared for the toughest issues. They become adult community members having had this experience building trust and confronting a generational conflict together. They also become part of a growing network and community of graduates from many of the 150 organizations within the ALLMEP network.

Walking out into the cool Jerusalem air that evening, I couldn’t stop thinking about where these remarkable kids will be in just a few years and imagine: What could the next generation of voters and leaders look like if there was so much more of this? The implications could spread wide and far beyond this city. As the next year of programming soon gets underway, the power to step closer to that reality is once again in the hands of local parents and kids alike.

About the Author
Avi Meyerstein is the founder and president of the Alliance for Middle East Peace (ALLMEP), the coalition of 150 NGOs building people-to-people cooperation and partnerships between Israelis and Palestinians, Arabs and Jews in the Middle East. The views expressed are his own.
Related Topics
Related Posts