November brings with it two important anniversaries for the State of Israel. The second of the month will mark 100 years since Britain endorsed the establishment of a national home for the Jewish people. November 29 will be 70 years since the United Nations passed General Assembly Resolution 181 calling for the partition of the British-ruled Palestine Mandate into a Jewish state and an Arab state.

Both dates commemorate significant historic steps toward the establishment of the Jewish state. Unsurprisingly, both have sparked a litany of accusations of original sin against the Palestinian people.

All of 68 words long, the declaration relayed in the letter sent by British foreign secretary Arthur James Balfour, was a pivotal public pledge of Britain’s support for a Jewish homeland, and the first step in legitimizing its establishment. As its centenary approaches, critics have sought to undermine the declaration’s legitimacy, asserting that it was a shameful display of British imperialism and colonial transgressions against the ‘indigenous population.’

Presumably these critics are referring to the Palestinian people, ignorant of the fact that the Jewish people have both a legitimate and indigenous connection to their ancient homeland which was never conceded. Moreover, as historian Martin Kramer writes in Mosaic, “The Balfour Declaration wasn’t the isolated act of one nation. It was approved in advance by the Allied powers whose consensus then constituted the only source of international legitimacy. Before Balfour signed his declaration, leaders and statesmen of other democratic nations signed their names on similar letters and assurances.” 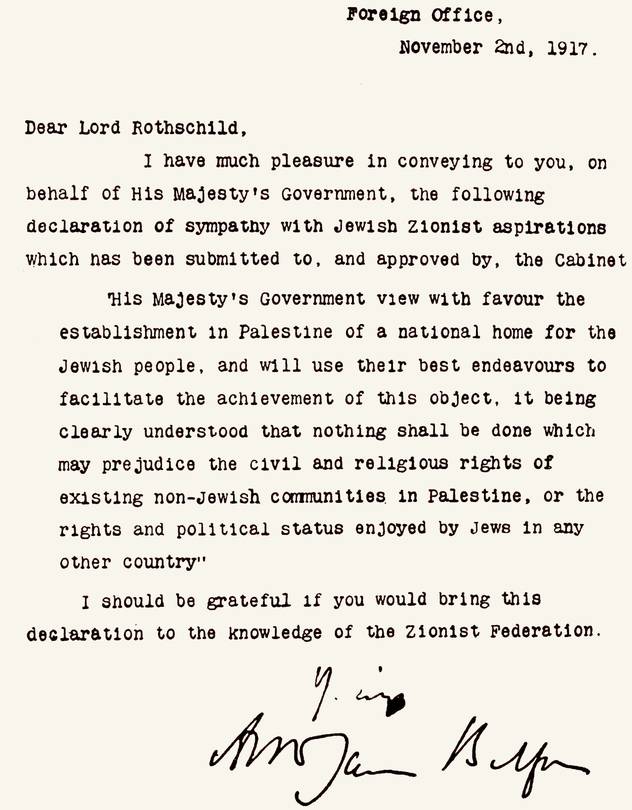 Critics have also argued that it’s wrong to celebrate a letter and UN resolution that have sowed decades of strife. Naturally, they don’t fault the Arab nations that rejected the UN’s plan to partition the territory, and instead launched a war of annihilation against the newborn Jewish state. They don’t criticize Palestinian leaders for rejecting peace plan after peace plan that could have established a Palestinian state. And they certainly see no problem with a Palestinian government that still refuses to recognize Israel as a Jewish state.

Rather the conflict is the fault of the British. Or the United Nations. Or the Zionists. Anyone but the Palestinians. Ignoring the injurious actions of decades of Arab and Palestinian leaders serves only to exacerbate the problem. Never having been held to account, these leaders continue to reject compromise and negotiation in favor of ineffectual public relations stunts.

Last summer, in a speech to the Arab League Summit, Palestinian Foreign Affairs Minister Riyad Malki declared that the Palestinian Authority would file a lawsuit against Britain for issuing the Balfour Declaration. More recently, in his September speech to the United Nations General Assembly, President Abbas insisted the British ‘apologize’ for the Balfour Declaration.

Admirably, British Prime Minister Theresa May has rejected the demands. Speaking in the House of Commons earlier this year, she said, “We are proud of the role that we played in the creation of the State of Israel, and we will certainly mark the centenary with pride.” Indeed, there will be a dinner commemorating the event in London and attended by May and Prime Minister Netanyahu.

Almost 100 years after the Balfour Declaration and 70 years after the UN sought to establish a Jewish homeland, it’s worth recalling one more milestone. This year also marks 50 years since the summit conference in Khartoum where eight Arab heads of state famously formulated the consensus that still underlies the policies of many Arab states today – no to peace with Israel, no recognition of Israel, and no negotiations with Israel.

Half a century later, the Palestinian leadership remains chained to the past and committed to a rejectionist policy. So long as does, it cannot seek meaningful reconciliation or find a path to a more peaceful future.

About the Author
Aviva Klompas is a speechwriter, strategist, and public speaker. She currently serves as the Associate Vice President of Strategic Israel Engagement at Combined Jewish Philanthropies. Previously, she served as the Director of Speechwriting at the Permanent Mission of Israel to the United Nations.
Related Topics
Related Posts
Comments
Advertisement