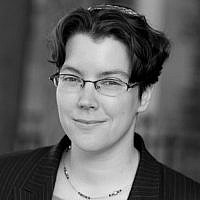 The Blogs
Lisa Grushcow
Apply for a Blog
Please note that the posts on The Blogs are contributed by third parties. The opinions, facts and any media content in them are presented solely by the authors, and neither The Times of Israel nor its partners assume any responsibility for them. Please contact us in case of abuse. In case of abuse,
Report this post.

“Wait, you’re bringing Jews from Montreal to learn about Israel in Kenya?!”

It did seem like an unconventional trip. I had the privilege, together with Reda Mansour, an Israeli diplomat, of leading a group of Montreal Jews, in their 20s and 30s, to Kenya. We were there to learn about Israeli development work in Africa, work which we were all surprised to learn went back to the 1950s. When the State of Israel was in its infancy, still very much a developing country itself, Golda Meir and other Israeli leaders went to Africa and established Mashav, Israel’s agency for international development cooperation.

The question about bringing Montreal Jews to Kenya was asked by an Israeli agronomist, in the dusty savannah of Galana. There, an Israeli irrigation company is bringing water to undeveloped land, growing crops to meet the need for food security in a country which is at risk of famine and drought. As one of the engineers said, “If you see what we have done in Galana, you see what we did in Israel in the 1940s.” Israeli agricultural innovation, whether in greenhouses or drip irrigation, is prized in Kenya. It gave our participants — many of whom, like me, came of age during the intifadas and vociferous international criticism of Israel — a taste of the country’s idealism, creativity, and commitment to tikkun olam. As one of our participants said, “I felt pride in Israel. I saw massive circles of corn growing in a place that is otherwise scrub… in a county where people are without food.”

We felt that pride when we visited three schools, and saw how Mashav has helped train and support incredibly dedicated Kenyan educators; we felt it when we celebrated Shabbat with the Nairobi Jewish community, many of us participating in their first egalitarian service. “It reminded me,” one of our participants said, “that anywhere we go, there is a place for us.”

We saw the Israeli deputy ambassador in Kenya inspect a parade of young Kenyan scouts, dedicate a school library, and donate chickens to another school that teaches its students life skills alongside academics; we heard children read poems with pride, tell knock knock jokes in Swahili, Skype with Israeli kids on a kibbutz. We heard the deputy ambassador tell them to hold onto their dreams. “Israel is small, it has problems,” he told them. “People often tell us we can’t do things, but we succeed and prevail, like you will succeed and prevail. How? We don’t listen to people who tell us we can’t.”

Alongside inspiration, we were exposed to complexity. The challenges of development work. The divisions within Kenyan society, and its economic struggles. The nuances of Israeli politics, priorities, and peoplehood – which we learned firsthand from Reda, himself a Druze representative of the Jewish state. We were not handed a simple story; rather, we left Kenya acutely aware of how much we did not know. But it was precisely that complexity which let us feel connection. Connection to the Kenyan people we encountered, and all the children whose dreams we were privileged to see. Connection to each other, a diverse group of Montrealers, stepping away from our other commitments to come together on this trip. And connection to Israel, with a newfound respect for how, despite its own struggles and much opposition, it lives by its values.

What a privilege: to see Israelis help another desert bloom, to see children empowered with opportunity and hope, and so much more. Montreal Jews going to Kenya to learn about Israel? Absolutely unconventional. But utterly worthwhile. In all of our partnerships – whether it be between Israel and Diaspora Jews, Israel and Kenya, or relationships between all three – may we go from strength to strength.

Rabbi Lisa Grushcow is the senior rabbi of Temple Emanu-el-Beth Sholom in Montreal.

About the Author
Rabbi Lisa J. Grushcow, D.Phil., is the senior rabbi at Temple Emanu-El-Beth Sholom, the Reform synagogue of Montreal. She holds a doctorate in rabbinics from Oxford University, where she studied as a Rhodes Scholar, and was ordained by HUC-JIR. She is a Hartman Senior Rabbinic Fellow.
Comments