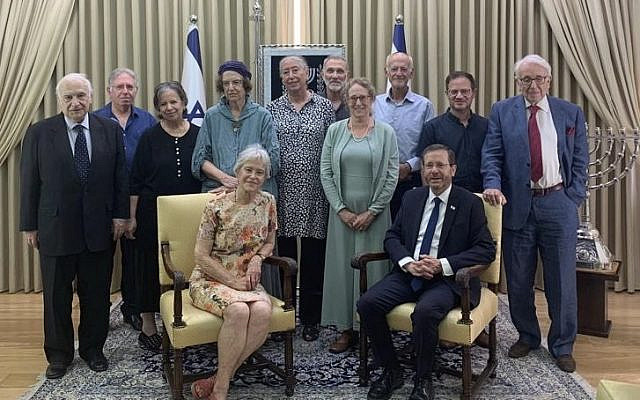 Israeli President Isaac Herzog with poet Hamutal Bar-Yosef and special guests (photo credit: Office of the President of the State of Israel)

This week my wife and I will pass our three-year mark living in Israel. We were two of 34,000 new immigrants who arrived in 2019.

I don’t know how many of those olim hadashim have left. No doubt economics, politics, Covid-19, and the prospect of war have driven some of them away. Not us. We’ve enjoyed our time in Israel, finding much to admire in our new home. To celebrate our anniversary, I offer this collection of personal highlights.

ARRIVAL  Landing at Ben Gurion Airport in a plane filled with new citizens, we were greeted by smiling, flag-waving soldiers and showered with flowery words by dignitaries. The speechifying went on a bit long, but the welcoming spirit of the event was sweet.

ELECTIONS  When we arrived, Israel was in the midst of a political crisis. Those who supported Benjamin Netanyahu as prime minister were at loggerheads with those who wanted him gone. The government formed a few months earlier fell apart soon after we landed, calling for another national election. (This was to be the second of four within two years, with a fifth slated for this coming November.)

A new Israeli citizen needs to have lived in the country at least 90 days in order to vote. We had been citizens for only five weeks. The best I could do in Election #2 was to be a poll watcher. The experience proved to be an excellent way to immerse myself in Israeli culture.

COMMUNITY   Once settled in our Tel Aviv apartment we invited a dozen neighbors over for drinks. The evening went well, a promising start to building  a supportive community. Then Covid-19 struck. Undeterred, I knocked on my neighbors’ doors and invited them to take part in a music video.

EXPLORATION   Walking the empty, haunted streets of Tel Aviv during the Covid-19 lockdown felt surreal.  In the silence I discovered some exquisite gems.

ADOPTION   A long-time dog lover, I never dreamed that a stray cat would become a treasured member of my family. Our new pet  provided a wonderful distraction from Covid and Trumpmania.

AMERICA  Sad as I felt watching my birthplace implode, I also felt relief; conditions in Israel could always be worse. America’s madness prompted me to reach out to a stranger on the other side of the political divide to promote civil discourse.

REFUGEES – Early on I discovered Elifelet, a non-profit organization in South Tel Aviv that serves children whose families had fled war-torn African countries, such as Eritrea and Sudan. These were stateless, statusless people hoping to be formally recognized as refugees, while dreading the possibility of being sent back to their native lands. My work as a filmmaker, then as a volunteer in Elifelet’s after-school program, drove home how fortunate I was to be an Israeli citizen.

ROCKETS  The recent barrage of rockets from Gaza launched by Islamic Jihad reminded me of last year’s rockets launched Hamas. When rockets fly, it matters little who launched them. More important is how well the Israel Defense Forces responds. I can confirm that IDF’s Iron Dome performed superbly.  If only the peace process were as successful.

INDEPENDENCE DAY   One of the main reasons we made aliyah was to be close to our children, both of whom had become Israelis several years before. Our daughter returned to the States, but our son is closing in on ten years in Israel, and he has a serious girlfriend. Her family invited us to celebrate Israeli Independence Day with them. We adore our son’s girlfriend and her family. (No pressure, of course.)

ACTIVISM  A man I met early mornings in a park near my home inspired me to document how he looks after the pigeons of our neighborhood. Whether one likes pigeons, or not, the man is a credit to Tel Aviv.

NEW FRIEND   Rami and I crossed paths on the basketball court in the same park where I met the pigeon protector. A one-man charm offensive, Rami not only starred in a web series I produced, he became my buddy.

THE VISIT.  Thanks to another friend, my wife and I were Invited to President Isaac Herzog’s Jerusalem residence. The president wanted to discuss poet Hamutal Bar-Yosef’s historical novel, The Wealthy, about the Jews of Europe and the land of Israel before 1948. Hamutal wrote the book as a counter to the negative publicity Israel and Zionism typically receive world-wide. Our discussion with President Herzog inspired this blog post. 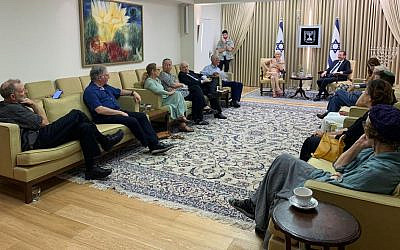 Book discussion with President Herzog(Photo: Office of the President of the State of Israel)

Without a doubt, as President Herzog acknowledged, Israel makes mistakes. The country also shows signs of a bright future. If our nation can solve its most vexing problems, it will soar even higher above the authoritarian regimes, many of them failed states, who are its neighbors.