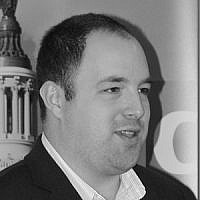 The Blogs
Michael Freedman
Apply for a Blog
Advertisement
Please note that the posts on The Blogs are contributed by third parties. The opinions, facts and any media content in them are presented solely by the authors, and neither The Times of Israel nor its partners assume any responsibility for them. Please contact us in case of abuse. In case of abuse,
Report this post.

25 years after Israel severed ties with apartheid South Africa, there is only a flickering memory of the troubled relationship between the two countries. Today, South Africa’s and Israel’s alliance is strong, at both the business and governmental level. There are some who care deeply about building positive bridges – among them is Adrian Gore.

Gore is the founder and CEO of Discovery, a financial services provider based in South Africa. Discovery is the pioneer of reward-based healthcare, and has an international client base of over 6 million, spanning South Africa, the UK, the US and China.

As a well respected South African leader, entrepreneur and advocate of his country of birth, Gore is speaking at the aptly named Israeli Presidential Conference – Facing Tomorrow. He expanded on the driving forces behind his business and philosophy, and the lessons that can be drawn from Israel for South Africa – and vice versa. Gore is excited to represent the positive aspects of this alliance.

“I am proud to be Jewish and part of the Israel story. One of the uses of this conference is to bring people together on the positives and the overlaps, demonstrating the entrepreneurial culture.”

Entrepreneurship is the seed that allowed Discovery to blossom into the company it is today. Discovery was initially funded with a $1m seed investment from Rand Merchant Bank. This success should not be seen as an endorsement of venture capital in Africa, explains Gore. “Venture capital is fundamental to Africa’s development. The commercial VC industry will take a while to emerge but the discipline of doing things on a basis that at least feels commercial is important. We had as easy a ride as possible and are lucky to have shareholders who are long-term. Not all types of VC are the right nuance for South Africa.” He agreed that Israel has experienced both the positives and negatives of this cycle of aggressive and exit-driven entrepreneurs and investors pursuing each other, and the need for longer-term capital to support businesses to grow in situ: “Viper-like VCs don’t have the patience and resilience. There has to be some ideological support for developing a country from your investors.”

Gore observes that inequality, as measured by the Gini coefficient, has very little correlation to forms of government or economy, so the driving force for closing these gaps must come from elsewhere. Where start-ups and innovation are lacking, Gore steps in. Discovery is committed to its role as a nation-builder. “We have to be a force for good, genuinely from an ideological perspective. Corporate social responsibility dollars are not enough – it’s really about society-building in an institutional and financial form.” Gore has put his money where his mouth is. Discovery invests in training of black doctors in 200 particular specialties – fully 5% of specialists in South Africa.

Even though de facto economic apartheid is still present in South Africa, with a new black middle class as far removed from the townships as the white community, Discovery has stayed above the fray. About 70% of their employees are non-white and their client base is composed of a non-white majority (characteristic of the South African population). Discovery believes strongly in building a more inclusive country, and organisation.

Discovery’s success is noteworthy given Africa’s volatile history and problems with basic rights. Many of these rights are taken for granted by citizens and aspiring entrepreneurs in developed nations. Gore understands the delicacies of basic rights and their importance in Africa’s development. “Rule of law and property rights have to be assured. Entrepreneurs can only flourish when they know this. Even if there is some irrational legislation, as long as there are constants, people know nothing will be nationalised and companies will be able to grow. Certainty that there is a future spurs innovation. Bizarrely, if the level of corruption is constant and known, and socially workable even if not morally very acceptable, entrepreneurship and capital will still flow. It’s volatility that creates problems.” Discovery, once a start-up, has proven that successful entrepreneurship given these conditions is achievable in South Africa.

Discovery has utilised its entrepreneurial spirit to fight diseases in Africa. Everyone has heard of the AIDS epidemic in Africa, but there is another war to be fought that gets less attention and can be won – that of non-communicable diseases, or diseases of lifestyle. Gore explains, “it is a matter of lifestyle choices, not genetics or communicable diseases.” Globally, three lifestyle choices – poor nutrition, physical inactivity, and smoking, lead to four conditions – cancer, respiratory illness, cardiac illness and diabetes, that creates 50% of all mortality. A 2012 study by GlaxoSmithKline estimated that 61% of adult South Africans are obese. Even more troubling is that 78% of these obese individuals believe they are healthy. Gore is a recognised leader when it comes to fighting non-communicable diseases.

As an avid fitness guru, he hopes he can instil his healthy lifestyle choices through Discovery’s Vitality program. The benefits of insuring healthier clients are obvious. The program encourages people to be healthy and reduce their healthcare usage. The results of the incentive are astonishing –twenty-two million visits to the gym from his customers. This is in his view the “first step in fighting an increasing sedentary lifestyle”. For the youngest generation, Gore believes that prevention begins with education. “Parents need to act as ambassadors to their children. As part of our commitment to corporate social responsibility, we have started a Vitality school program that is partnered with 3,000 schools.” However, Vitality is just the beginning of an innovative health crusade.

“Not overnight – but slowly and surely – society is rebelling against all diseases of lifestyle. I am optimistic about the future and the next generation. We have the support of legislation and regulation, but the fight is just beginning. Next on the list is public smoking and sugary and fatty food intake.”

Gore concedes that civil liberties must be taken into account when dealing with such personal issues. Take New York City as an example of the delicacy of the matter. Mayor Michael Bloomberg banned large quantities of soda in the city as a way to encourage healthy choices. There was a media blitz depicting that this was the beginning of the government directing every personal decision. “Regardless of these concerns, the fight against non-communicable diseases is the next wave of improving society’s health. HIV, AIDS, and TB have massively been brought under control. Why can’t we defeat diseases brought about by our own lifestyle choices?”

Discovery has sought to create a business model based on fairness and awareness. It uses the same behavioural change model as in the Vitality wellness program for its car and short-term insurance unit. “The percentage of people who think they are good drivers is greater than the number of drivers who are. We use telematics in cars to better understand the risk each individual poses and use this info to help drivers make better driving choices, with the aim of building an accident-free South Africa. Behaviour change is dramatic when measured and when incentives are available.”

Gore is also aware of the inherent “brain drain” caused by the financial services industry. The attraction of high pay leads the best and brightest away from vocational careers in education, medicine and other areas of social value, and away from genuine entrepreneurship. “Businesses should run around the idea of shared value. We can legitimise the idea of capitalism by harnessing business as a tool to build and strengthen society.”

These are certainly messages that will resonate in Israel, where achieving this balance is still a work in progress, at a governmental, societal and commercial level. Gore’s presence at the President’s Conference will hopefully add to this debate and perhaps he will bring back with him some of Israel’s best innovations.

About the Author
Michael is Executive Director of Asquith Israel Merchant Bank, which seeks to go "Beyond the Start-Up Nation" by investing long-term in Israeli growth companies.
Comments