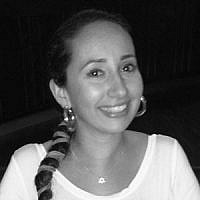 The Blogs
Deganit Glick
Apply for a Blog
Please note that the posts on The Blogs are contributed by third parties. The opinions, facts and any media content in them are presented solely by the authors, and neither The Times of Israel nor its partners assume any responsibility for them. Please contact us in case of abuse. In case of abuse,
Report this post.

Last Friday night my cousins were relaxing during a normal Friday night meal. Suddenly they hear screams and my cousins husband (in his fifties) went running next-door unarmed to investigate. His son, an IDF soldier, ran to get his gun. Through their neighbours window they saw dead bodies, massive amounts of blood and a terrorist wielding a huge knife. The soldier shot him through a window, effectively putting him out of action. He – or anyone for that matter – could have run in and finished the job, but chose not too. Thankfully he got in there before the 5 little kids hiding in the next room with their mother were discovered. Their father, was not so lucky. He was murdered along with his sister and 70 year old father.

How do the general public (including the chief rabbi, who managed to contradict himself) react to his quick-witted heroic response?

They criticise for not killing the terrorist (may he eventually rot in hell). They criticise the soldier’s mother for mentioning in a grief-stricken interview very soon after the event that she was somewhat relieved he didn’t kill anyone, because of all the backlash this might have given him (not to mention the blood on his hands). Journalists, and bloggers, get a little time to consolidate their emotions. People interviewed for Breaking News, do not. Instead of supporting our fellow Israelis who HAVE BEEN THROUGH A HORRIFIC TRAUMA, they get condemned.

How on earth do the public get to criticise? How many of us have been faced with war-like situations of impending danger where we have to think on our feet? Sure soldiers get to deal with violence on duty, in combat but how many of have to deal with it at HOME? With no General barking instructions or troops alongside us. How many of us have been relaxing in our own homes and been interrupted to find our neighbours, old friends who we care about brutally murdered? Blood spattered on what was supposed to be a festive meal?

Hardly any of us.

But this kid did. And I call him a kid because he is. Most of us do not have to make such decisions at his age. And this is not the first time he has thwarted terrorists. He saved his teenage sister and her boyfriend (now fiance) from 2 terrorists who broke into their home just 3 years ago, when he was still a teenager himself.

Lets say for arguments sake he had made a bad decision, or could have acted differently. Can we really judge? Would we have done a better job? As far as I understand, army protocol for such situations is Neutralise the Terrorist. He did that. What more can we reasonably expect?

This soldier deserves a medal, not to mention our sympathy for having to face such a horrible scene. His father too. The family who lost some old friends and went through yet another trauma now have to live across the path from the scene of a horrible crime and most likely a ghost house (who nobody wants to return too) deserve our support and compassion, not internet trolling.

And one more point. Just a thought. Where I come from, jolly old freezing England, if somebody breaks into a civilian’s home and murders 3 innocents in cold blood … then in an interview they say “I was really not happy with the security regulations at the mosque” nobody would take them seriously. We would think “this guy is crazy, there is no defence for cold blooded murder”. We would lock them up and throw away the key. Yet his parents and village defend him and the world carries on. How is this normal?

About the Author
Deganit made aliyah in 2010. She is a full-time earth-mother and an aspiring writer living quietly tucked away on a hilltop in Northern Israel. Her writing features encounters with Israelis, her advice (wanted or otherwise), living with small children and animals and her family's attempted eco-living against the odds. The views expressed are her own.
Comments