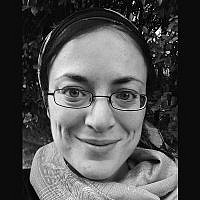 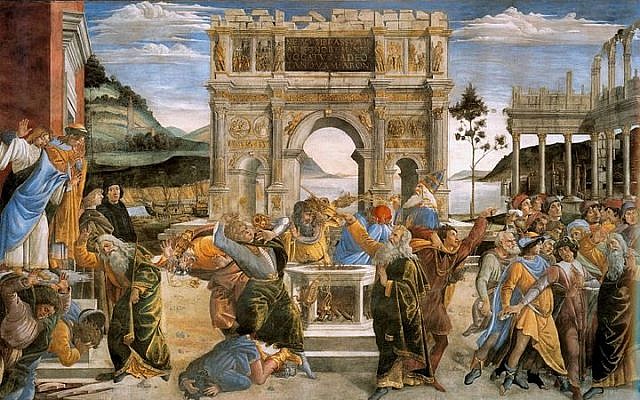 'The Punishment of the Rebels,' a fresco by Sandro Botticelli, the Sistine Chapel, Rome. On the right, the rebels attempt to stone Moses, Joshua protecting him. The center shows Korach and conspirators being driven out by Moses and Aaron. To the left, the ground opens and the two principal conspirators sink into it. (Wikipedia)

Parshat Korach juxtaposes a fight over equal accessibility to the divine with divinely selected pre-eminence. It is access for all versus the predetermined elite. The episode of Korach’s rebellion abuts Aaron’s confirmation as head of the priestly caste and one who can come close to God, in a way that Korach cannot.

Bamidbar 16:9-10 Isn’t it enough for you that the God of Israel set you apart from the community of Israel and gave you access to Him, to perform the duties of the Lord’s Tabernacle and to minister to the community and serve them? He drew you you and all your fellow Levites with you close, and you demand the priesthood too?

This episode can be problematic to hear. The Korach line asks where there is hope of approximating God’s image when some are cut from cloth more fine and have more of a chance of fulfilling their mission in life, merely by virtue of being from the right family? Where are the equal rights, the equal opportunities? To a liberal, Korach paints a sympathetic image. He too received the Torah at Sinai, he too experienced the miracles of redemption from Egypt. Why is he not privy to this added closeness to God? If anything, his desire to experience greater closeness with God should presumably be applauded, not violently crushed. To a modern audience, this might be a painful message. Indeed, Korach is not out to deny the importance of the system but to change the rules — he does not deny there is a center of truth, but writhes against the circles of influence that prevent him and others from achieving it.

The chiastic structure of the text gives some clues as to its reading. After Aaron and Korach’s attempted firepan show-down, taken over by God’s supernatural subsuming of Korach and his followers (and their wives, children and infants), the parasha chiastically engages with Korach’s demise in the exultation of Aaron. The parasha returns to firepans, this time for priestly use only and then the blossoming of Aaron’s cane. The method of providing evidence for Aaron’s elevated standing as head of the priestly caste is as supernatural, as was the engineering of Korach’s unearthly descent.

Bamidbar 17:21-23,25 Moses spoke to the Israelites. Their chieftains gave him a staff for each chieftain of an ancestral house, twelve staffs in all; among these staffs was that of Aharon. Moses deposited the staffs before the Lord, in the Tent of the Pact. The next day Moses entered the Tent of the Pact, and there the staff of Aharon of the house of Levi had sprouted: it had brought forth a flower, produced buds, and borne almonds.…The Lord said to Moses, “Put Aharon’s staff back before the Pact, to be kept as a lesson to rebels, so that their mutterings against Me may cease, lest they die.”

Within the model of this chiasmus, the flowering of Aharon’s cane stands in apposition to Korach’s rebellion and the shared imagery is striking. For, just as ‘וַיָּצֵץ צִיץ’, the spruced and smoothed cane brought forth buds, in contrast to the canes of the other tribal heads, so too, does Korach’s conflict wrestle over the producing of these buds – what each person has the potential to give or be held back from giving.

Jastrow’s dictionary affirms that the etymology of ציץ tzitz, bud;  ציצית tzitzit, fringes and ציץ  tzitz, the high priest’s headplate all align, and in fact come from the same root. All three are external manifestations of internal growth that lie on the very edge of being. The bud is only the smallest sign of life that is being readied within the branch itself. Moreover, it shows very little of the floral magnificence it will unfurl into later. It is a sign of hope and direction towards something greater. Tzitzit lie on the margins of one’s person, entirely man-made and directing one’s action towards goodly ways. They frame and they limit, demarcating each person by God-given boundaries.  And of course, no less, the golden headplate of the kohen gadol, the tzitz, worn by Aaron the High Priest first, is a vestment of glory indicating the daily investment of the kohen gadol in directing all his actions towards God.

This pruning of budding promise and cultivation of latent energy lies at the heart of Korach’s rebellion. In Perek Helek of Tractate Sandhedrin, Mrs. Korach is described as heatedly urging her husband to fight social injustice more strongly – using the example of tzitzit. She exclaims on how society has made artificial boundaries (tzitzit) around people. Except Mrs. Korach does not necessarily see the tzitzit as a way of securing progress in the right path, as buds ready to break into blossom, but a form of growth which is unnecessary. Just as all should wear tekhelet (meaning “sky-blue,” but also a color that includes all other colors), she claims, society should all be ecumenical, meeting the individual where they are, and not challenging further growth.

Sanhedrin 110a She said to him: And furthermore, with regard to that which he said to you, to prepare sky-blue dye for your ritual fringes, one could respond to him: If it enters your mind, Moses, that using sky-blue dye is considered a mitzva, take out robes that are made entirely of material colored with sky-blue dye, and dress all the students of your academy in sky-blue robes without ritual fringes; why could one not fulfill the mitzva in that manner? Clearly, Moses is fabricating all this. This is the meaning of that which is written: “The wisdom of women builds her house” (Proverbs 14:1); this is referring to the wife of On, son of Pelet. And: “Folly plucks it down with her hands” (Proverbs 14:1); this is referring to the wife of Korach.

Mrs. Korach rationally argues that tzitzit dyed sky-blue are not necessary as fringes to a garment when the whole garment is dyed sky-blue. That is to say, when the whole community is holy, why does one need gatekeepers or those wearing the tzitz? Why does one need to accept that the budding kohen will have greater access to God in a certain way more than any other individual will? And her argument makes sense.

Yet, as much as I want to defend Korach — and perhaps one still can defend him while recognizing that other things might need to be defended more – the original tzitz from Aaron’s cane tells a different message relating to Korach. The flowering cane subverts Korach’s partyline, tells a story of growth which is encouraged and an effort to build a society wherein we each use our natural and nurtured talents to come closer to God. We accept that all growth is fueled by energy from the inside, but it must be directed from the outside. For, the tzitz on Aaron’s head says “Holy to God” – he is holy because God considers him holy and the tzitz on Aaron’s cane is caused to blossom by God. When wearing tzitzit, it directs one’s attention outwards, outside ourselves.

Growth occurs when we make firm our boundaries, our fringes and we push outwards; not when we take all that we have, leave no room for progress and leave our buds unblossomed.