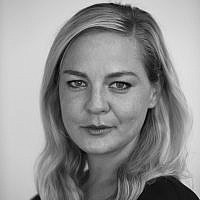 The Blogs
Tamar Pileggi
Apply for a Blog
Please note that the posts on The Blogs are contributed by third parties. The opinions, facts and any media content in them are presented solely by the authors, and neither The Times of Israel nor its partners assume any responsibility for them. Please contact us in case of abuse. In case of abuse,
Report this post.

In the last half-century, Egyptian Coptic Christians (roughly 10 percent of Egypt’s 80 million) have been suffering from increasing discrimination and persecution. Due to rising Islamic extremism, tensions between Egypt’s majority Muslim population and its Coptic minority have resulted in even more violence against this ancient religious minority. What is often reported as a sectarian dispute is rapidly becoming a systematic and often deadly targeting of Egypt’s largest minority.

Although the exact number is unclear, hundreds of Christians have been killed in the last three decades. In a report titled ‘Study of the Present Egyptian Constitution and the Law Articles that Conflict with Minority Rights,’ the UN office of the High Commission for Human Rights stated, “The effect in real life on Christian minorities is most unfair as they do not generally see their murderers punished by courts of law …” Human rights groups and several members of the U.S. Congress have investigated the frequent instances of abducted Coptic women and girls, their forced conversion to Islam and marriages to Muslim men. This bi-partisan group of politicians has expressed their concern to the U.S. State Department, detailing the often-violent marriages that leave Coptic women victims of sexual exploitation and domestic servitude. Several Egyptian lawyers reported to the Commission on Security and Cooperation in Europe in 2011 that they have seen over 550 cases of abductions of Coptic women in recent years.

One of the deadliest attacks against the Copts, killing 23, happened on January 1, 2011, when a suicide bomber detonated a bomb outside the St. Mark’s Coptic Orthodox church in Alexandria. Prior to the attack, Al-Qaeda in Iraq announced that all Christians are legitimate targets and an Islamist website called for attacks on specific Egyptian churches, including St. Mark’s. The attack in Alexandria occurred exactly two months after an attack on a Syrian Catholic church in Baghdad, in what extremists called a response to the mistreatment of Muslim converts by Egyptian Copts.

Although the Muslim Brotherhood has been quick to condemn attacks on the Copts as “barbaric,” and Article 43 of Egypt’s new constitution guarantees religious freedom, Article 2 defines Egypt as a Muslim state, leaving the constitution to be interpreted through shari’a law. The worrying rise in violence against the Coptic community suggests governmental unwillingness to effectively investigate and prosecute the perpetrators of crimes against this minority.

Incitement – a trigger for genocide

The day Egyptians, and I don’t mean the Muslim Brotherhood or Salafis, regular Egyptians, feel that you are against them, you will be wiped off the face of the earth. I am warning you now: do not play with fire.

A message to the church of Egypt, from an Egyptian Muslim: I tell the church ‒ by Allah, and again, by Allah ‒ if you conspire and unite with the remnants [opposition] to bring Morsi down, that will be another matter … our red line is the legitimacy of Dr. Muhammad Morsi. Whoever splashes water on it, we will splash blood on him.

The explicit intimidation of these statements made publicly by religious leaders is incitement to genocide. This state-condoned incitement to violence has long been recognized as a precursor and trigger to potentially genocidal mass-atrocity crimes. The evidence and legal precedents from the Nuremberg and Rwandan trials validate the correlation between incitement and mass atrocity crimes. Direct and public incitement is criminalized in Article III of the 1948 Convention on the Prevention and Punishment of Genocide, and a similar provision can be found in Article 25 of the Rome Statute of the International Criminal Court. Both incitement and conspiracy to commit genocide are punishable crimes in and of themselves, neither requiring any act of genocide.

Edmund Burke is reported to have said, “All that is necessary for evil to flourish is for good men to do nothing.” We have learned that ignoring the early warning signs has resulted in persecution, discrimination, human rights abuses, violence and the deaths of millions. The genocides in Europe and Africa remain notorious examples where the international communities failed to intervene to prevent the early warning signs, including persecution, discrimination, segregation, and incitement. Knowing that dehumanizing hate language and incitement are effectively used by leaders to motivate, organize and compel individuals and entire communities to commit hate crimes, prompt intervention in response to these warning signs is the only effective way to prevent mass atrocities, including genocide.