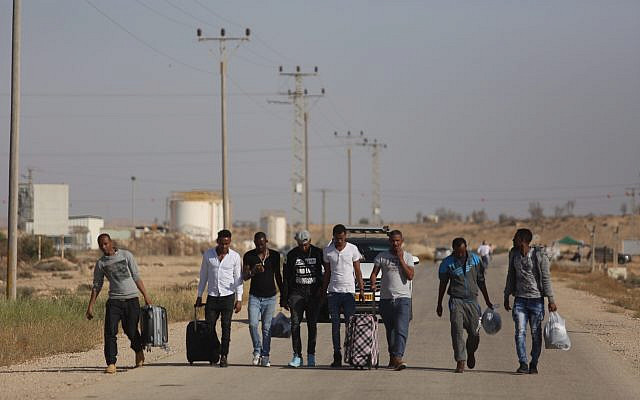 In the past 15 years, tens of thousands of Africans, mostly from Eritrea and Sudan, have crossed into Israel. The majority of these people now live in south Tel Aviv.

I left my house, my mum, my dad, when I was 14 years-old to join the army. But in the army in Eritrea, you don’t know when it’s going to end. There is no end. You can’t see your family, nothing. In Eritrea, there is no freedom. All the time, you are in the army. I was in the army in Eritrea for 8 years. Yes, eight years. It was enough. One day, after I had been with them for a year and three months, I came home on break and I decided to leave Eritrea. It was 2007 and that was it.

I left and I went to Sudan and then to Libya. I was in Libya for three years and four months. I wanted to go to Europe but the way via the sea was closed. So I went to Egypt and then to Israel. Now, I’ve been in Israel for eight years. I came here in 2011.

When we came across the border, the Israeli army accepted us and gave us some food and water. After that, there are three places that I went to. The first place, I stayed there for only two days. The next place is a place called ‘Holot’ – in the desert – I was there for three months. After that, they give you a visa and you leave. I have a visa for two months, so I have to renew it every two months. All the Eritreans, they don’t have anything, no visa.

Shapira is a good place. There are lots of Eritreans here, so I have a lot of friends here. But I didn’t come here because of that. There was a problem with my house down the road, the landlord was raising the rent and making problems. So, I asked people in Shapira if there’s a flat near to here. And that’s it, that’s why I’m here.

I like living in Israel, but life here is a little hard. All the time, they are cursing Eritrea – and I’m Eritrean. All the time talking about Eritreans in a bad way. So that’s hard.

There are Muslims and Christians from Eritrea here. We eat together, sit together. We’re friends. There are no problems, we just don’t marry. That’s it. The Sudanese, I don’t know them. I know them like I know you, just people in the street, that’s it. Yes, I also heard that there are problems between the Eritreans and Sudanese here in Israel but I didn’t see that.

Are there Eritreans in Israel that support the Eritrean government? No, just liars and cowards. There are people here that send money home to Eritrea. So the government there knows who is here and where their family is. So they tell them in some way, if you speak badly about the government in Israel, we’ll kill your family here in Eritrea. That’s it. So you hear people say this and that, it’s lies. It’s because they are afraid.

I don’t miss Eritrea because there is nothing there. If I can, I will continue to somewhere new, Europe or some place. There are a lot of Eritreans that moved to Canada. But if I go back to Africa, there will be a problem. Someone might kill me. Yes, if the government changes, I’ll go back. What do I have here? Nothing. No family, no parents. Here, you just go to work, come back, go to work, come back. That’s it. If you don’t do that, no one is going to help. You’ll have no home, no nothing.

But there are some things here that are good. Here you can say what you like about the government and nothing will happen. In Eritrea, you aren’t able to do that.