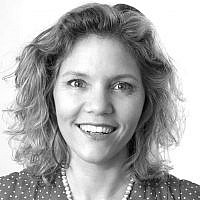 The Blogs
Noga Levtzion Nadan
Apply for a Blog
Advertisement
Please note that the posts on The Blogs are contributed by third parties. The opinions, facts and any media content in them are presented solely by the authors, and neither The Times of Israel nor its partners assume any responsibility for them. Please contact us in case of abuse. In case of abuse,
Report this post.

Two months into the war that has been raging since Russia’s invasion of Ukraine, costing the lives of thousands of innocent civilians, we are witnessing a new social reality shaped by the 21st century’s technological transformation. The vast quantities of information being transmitted between civilians, mainly via social media platforms, are shifting the center of control and the ability to shape reality from countries to the public, who, in turn, exert direct and indirect pressure on international companies. These companies, cognizant of the enormous influence consumers have on them, have been taking public positions and complying with economic sanctions imposed by Western countries on Russia by ceasing or suspending their activities in the country.

In the countries-corporations-public power scheme that has been shaping into a balanced triumvirate, these companies appear to be choosing to do the right thing. There are always those who will argue that companies’ actions stem from wanting to appease their ‘stakeholders’, who want to see big corporations take activist actions in environmental, social, governance (ESG) contexts. But the alignment of companies with public pressure is arguably a positive step. In relinquishing revenue shares in Russia, global corporations in the new era are demonstrating they care about social goals alongside their main aim of increasing their bottom line. Ultimately, the responsiveness of companies is certainly overwhelming: international corporate giants including Microsoft, Ikea, Nintendo, Boeing, Zara, Netflix and McDonald’s have responded to public pressure and stopped the entirety of their operations in the country, whether for economic reasons or moral ones.

That’s why recent comments by Goldman Sachs CEO David Solomon came as such a surprise. Solomon’s insistence that it’s not Wall Street’s job to ostracize Russia would be at home in the 19th century. But it’s out of step with the place of financial markets in the new era. Today, when corporations often have more money and power than countries, their statements are expected to correspond with the public mindset from which these companies derive the legitimacy that pushes them to economic success. Wall Street and the financial industry are the fuel driving the business world, and therefore constitute a key factor impacting whatever transpires outside that world. That is, of course, alongside regulators, who bear great responsibility through laws to be legislated that enforce financial markets to take ESG considerations into account when investing in corporations and countries. Let us not forget – Goldman Sachs manages the public’s finances, not its own. We are taught by past occurrences that a discourse driven by a fiscal economic position alone, one that is not considerate of any additional parameters and values, might inflict high risks curtailing the opportunities for yields resulting from the same position.

Even in the small State of Israel, we have witnessed a process in which a well-publicized consumer pressure campaign, addressing price increases, for example, succeeded in subduing companies who chose to retract their statements, even if they considered their planned actions to be economically justified. The economic dimension is presently broadening, and the measure of successful companies is no longer determined solely based on classic financial indicators and the companies’ ability to generate positive returns for their investors. It is clearer to us now more than ever, that with public pressure from the bottom up to the companies and further upwards from there, the rules of the game can be changed; pressure that also generates change in financial regulations – according to which the fiduciary duty of companies has long been not only to their shareholders.

In order to strengthen the countries-corporations-public triangle, it is important to continue developing the international discourse on ESG and impact-related norms of conduct, as reflected by the UN Sustainable Development Goals (SDGs). There are already increasingly progressive regulations in place addressing issues of companies’ ESG management and reporting, and a requirement to take ESG considerations into account in investment, financing and insurance decision-making processes. These are accompanied by an emphasis on “greenwash” prevention measures such as the EU’s SFDR (Sustainable Finance Disclosure Regulation).

In summation, while countries will unfortunately probably continue to combat for the expansion of their borders, it is rather in the business world that we continue to expect welcome steps taken by companies that aspire to broaden their sector boundaries beyond that of their shareholders alone, to the entirety of stakeholders. At the same time, investment and financial bodies are coming to the understanding that in order to produce a portfolio with lower risk levels on the one hand and greater opportunities on the other, the investments they make must take into account ESG considerations.

About the Author
Noga Levtzion Nadan is Managing Partner at Value^2 - A Responsible Investment House, and CEO and Founder of Greeneye, an ESG Research company.
Comments