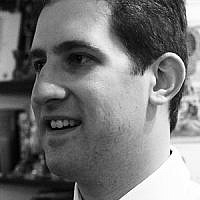 The Blogs
Ariel Chesler
Apply for a Blog
Advertisement
Please note that the posts on The Blogs are contributed by third parties. The opinions, facts and any media content in them are presented solely by the authors, and neither The Times of Israel nor its partners assume any responsibility for them. Please contact us in case of abuse. In case of abuse,
Report this post.

In With Child: A Diary of Motherhood, my mother Phyllis Chesler writes of having a dream while pregnant with me in which I request a name that begins with the letter A. Ignoring this, she initially chose Daniel as my name. After my birth, however, she determined that I was “Ariel: God’s lion,” that I would be her father Leon’s namesake, and that — for my Israeli father — I would have a Hebrew name.

This all worked out because I love my name. I love how it sounds, especially when pronounced with a rolling R, Israeli style. I love what it means. I love that it is a secret name for the city of Jerusalem. I love that is the name of a moon orbiting Uranus, the fairy spirit in Shakespeare’s The Tempest, and a book of poetry by Sylvia Plath.

Yet it hit me after several experiences ordering an iced coffee during my recent trip to Israel that, unlike in America, I felt at home with my name there. Each time when I stepped up to the counter, I was asked my name. And each time, I said it aloud with a proper Israeli pronunciation — the way it was meant to be heard, the way I do not present myself in America. In return, when my name was repeated back to me, I received recognition, and, later, coffee.

The importance of your name being known — and being normal — cannot be understated. A name being a core part of one’s identity, it becomes baggage when it has to be explained again and again, when it is associated with the wrong things, when it is improperly and narrowly gendered, when it is mocked and misunderstood, when it is always subject to challenge.

Last year, after I wrote an article in Time magazine on the influence feminism has had on modern fatherhood and my embracing feminism as a father to two daughters, I found myself being challenged — not on the content of the article, but on the basis of my name. “If you’re a man with the name Ariel, you had better be a tough-as-nails man’s man” wrote one commenter. Many others questioned my manhood in a similar vein.

As a boy, I was often frustrated by how my name was pronounced by others, and especially by how others ignorantly questioned how a boy could have such a name in the first place.

I visited the Tel Aviv Museum of Art with my family during this recent trip to Israel and while there we met another family — Israelis who had moved to Phoenix, Arizona. Immediately upon learning my name, the first question they asked was “How was it growing up in New York with this name? ” Perhaps, they inherently understood that my name could get lost in translation.

But, in Israel, the beauty and strength, and the origin and meaning of my name is known.

In Israel, I am a city. I am former prime minister. I am a laundry detergent. I am an alternate biblical name for Jerusalem. I am a lion of God, protecting all, guarding the gates. I am a man ordering coffee. I am just another Ariel.

In Israel, I see myself in wall art inside the Supreme Court of Israel, at holy sites, and throughout Jerusalem’s Old City.

In Israel, I see myself when my grandmother speaks to me, when my cousins call me, when my daughter tells me that lion in Hebrew is “Ariyeh” and adds “That’s you, Daddy.”

I close my eyes and hear myself, my mother’s voice calling for me two flights down from my room in my childhood home — my name echoing through the house’s air vents, and reverberating in my head years later.

I close my eyes again and hear my Israeli father’s slightly accented voice saying my name in a distant and grainy home video from the late 1970s.

I am rediscovering and appreciating my name and myself in Israel. But the moment I have found myself, I am lost again. I am home but I am also homeless because I cannot speak the language of my own name fluently. I am home but I am a tourist in my own mouth. I am desperate to speak and connect but I am dumb.

And, when I return home to America, I will have speech, but live in exile.

It is strange, this duality I have found. After traveling around the world I am closer than ever to my name and to myself. And, yet, I could not be farther from these things.

About the Author
Ariel Chesler is an attorney and a writer. His work has been published in various places including Time and the Huffington Post.
Comments