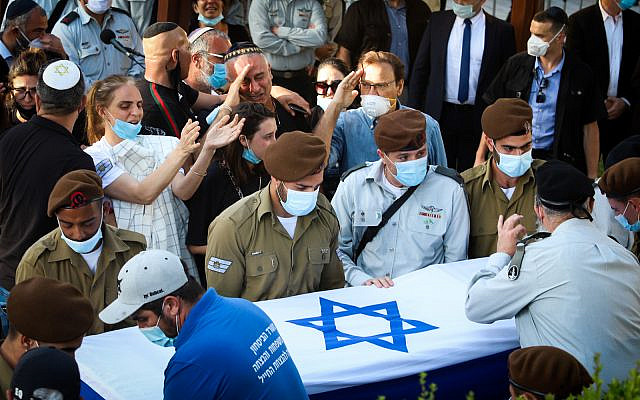 Family and friends watch as the coffin of IDF soldier Amit Ben Y'Gal is laid to rest in the military cemetery at Beer Yaakov on May 12, 2020.

BS”D
If, as the saying goes, a picture is worth a thousand words, then the picture of the family watching as Israeli soldier Amit Ben-Y’gal is buried speaks directly to us all. When an IDF soldier is killed, it affects not only his family, but the whole country of Israel as well as Jews throughout the world. Therefore Amit’s killing is something we all should take to heart.

He was only 21 years old from Ramat Gan and the first IDF soldier killed in action in 2020. His burial took place this week in the military cemetery of Beer Yaakov, which is located just a few kilometers from Rechovot.

In his eulogy, his father Baruch said,
“Amit isn’t an only child. He has millions of other siblings who are sad, who admire [him] and who know our lives in the Land of Israel depend on the courage of Amit and his friends.”

“I love you so much. My son is a hero,” Ben-Y’gal’s mother, Nava Revivo, cried out over his grave, according to Channel 12 news. “I’ll be strong. Guard us from above.”
Consider Me One Of Amit’s “ Siblings”

In his eulogy, Amit’s father used the word siblings to describe the millions of others who are sad and admire Amit for his courage and love of our country.
I have admired IDF soldiers from a very young age, so please call me one of Amit’s siblings. My oldest son Yaakov served in the IDF and I will discuss that shortly. But the fact that Amit was buried in Beer Yaakov has extra meaning.

Were It Not For The Lockdown, I Would Have Been “Visiting” Beer Yaakov A Few Times This Past Month

We often travel by passenger train to visit our son in Rechovot, and one stop before we arrive is Beer Yaakov.

It’s not a regular stop for most trains, but our train often stops there since Rechovot is its next and final destination.

As mentioned in a recent Blog, because of the lockdown I still have not been able to see and hold our new grandson Yitzhak. Hopefully, very shortly, I will be able to do so.

But seeing the picture of Amit’s funeral is a sight which has a lot of meaning. After things get back to normal, IDF soldiers will be able to visit their loved ones again on a regular basis. Sadly, Amit’s family will never have that privilege.

Yaakov was part of the fourth intake after this new unit was created which catered for boys from religious families. As I understand it, the unit is still functioning but goes under a different name.

I remember the time Yaakov said he was given the honor of parachuting from an airplane as part of his training. That honor was given to a few boys who performed well. This was not a requirement for soldiers in that unit, but Yaakov “jumped” at the chance. He did not want any of the family to worry about what would happen before he jumped so he delayed telling us until after it was finished. He knew we would have worried about it until the time it took place and so when he phoned to tell us it was over, we avoided many hours of worry. And we were very happy to know that he was safe.

The IDF – Being Part Of One Big Family

I met Yaakov’s commanding officer on a few occasions and he treated Yaakov like one of his own family members. In fact, that is the way it seems the IDF works. At least from what I saw, the IDF is very concerned for its soldiers. It was noted that lone children are not usually allowed into combat units, especially dangerous ones, without special permission from their parents. And it appears his father gave that permission on the request of his son; proving how much love Amit had for his country.

When Yaakov went to the recruitment office to begin his training, as a concerned father, I went with him on the journey, not knowing what to expect. But I soon found out how concerned the IDF is about every aspect of life as it pertains to being a Jew.
The food is all kosher, special times are set aside for davening and when Yaakov was in his unit, a Rabbi would come and give all the soldiers a shiur and have a discussion with the boys. And of course all of the Jewish holidays are observed so there is an opportunity for the soldiers to come home to be with family. (That is, of course when things get back to normal after this lockdown period).

Being Jewish In The US Army Was A Totally Different Experience

I was a student at the University of Minnesota and due to graduate in the summer of 1971. The Vietnam War was on the minds of all of us. I served in the US Army Reserves after graduation, and was also questioning why we had to fight in Vietnam at the time. But I never protested and did what my country wanted from its citizens.
I left Minnesota late that summer and ended up on the East Coast, where I did my basic training in Fort Dix, NJ and MOS (Military Occupational Specialty) in Fort Devens, MA.

I was just learning to be Shomer Shabbat when I had no choice but to begin my military training. Therefore, to be able to daven at the appropriate times or find kosher food as an example was difficult.

At Fort Dix, no Shul existed on base. Rather there were 12 chapels and on Friday afternoon, one of those Chapels was converted into a Shul so that all Jewish soldiers could attend Friday night and Shabbat morning services.

With regard to kosher food, I was offered cans of Hebrew National meat, which was all that was available. My drill instructor refused to allow me to bring it into the barracks, but after notifying the Jewish chaplain, who outranked him, that problem was sorted out.

Needless to say, becoming Shomer Shabbat in the US Army then was like running an obstacle course.

The Last Two Civilians To Die From A Terrorist Attack

For Israel, it is clearly a miracle that no IDF soldier or civilian has been killed from a terrorist attack according to Israel’s Ministry Of Foreign Affairs, since Rina Shnerb (17) a resident of Lod, was murdered Friday, 23 August 2019. Terrorists detonated an improvised explosive device (IED) planted at a natural spring that is a popular tourist and recreational site located near the West Bank settlement of Dolev. Police sappers determined that the bomb had been planted earlier at the spring and was triggered remotely when the family approached it. Rina, her father and brother were on a hiking trip in the area.

But the last civilian to die from wounds suffered during a terrorist attack was Nina Ganisdanova (74) of Ashkelon who on Tuesday, September 17 2019 succumbed to wounds sustained during a rocket barrage launched from the Gaza Strip at the Israeli city of Ashkelon ten months earlier, on 12 November 2018. Unable to reach the shelter across the street, she was buried under the rubble and critically wounded when a rocket hit the building in which she lived. She was transferred to the Tel Hashomer Medical Center for treatment, but remained in a coma until her death.

Therefore No Terrorist Attacks Have Taken Israeli Lives For Nearly A Year Until Amit’s Death – That Has Not Happened For At Least The Past 20 Years.

According to statistics available since September, 2000, from the Foreign Affairs Ministry, a page lists 1,359 people that have been killed by Palestinian violence and terrorism since September 2000. Amit’s name was just added to that list. I was not able to see a larger time period prior to Amit’s death on the list that Israel did not suffer a loss from Palestinian terrorism.

Since the last terrorism deaths in 2019, Israel has also now experienced deaths from COVID-19, just like the majority of the world.

But the real question remains what will happen when things go back to normal in the world. Will the Palestinians continue to act in their normal manner, and again resume their terrorism? Based on past experience, and given the recent Palestinian terrorist attempts, that should be an easy question to answer.

No doubt, that is why one statement, among many, Amit’s father said at his only son’s funeral was “Our lives in the Land of Israel depend on the courage of Amit and his friends.”

May Hashem Comfort Your Family Among The Mourners Of Tzion And Yerushalayim.