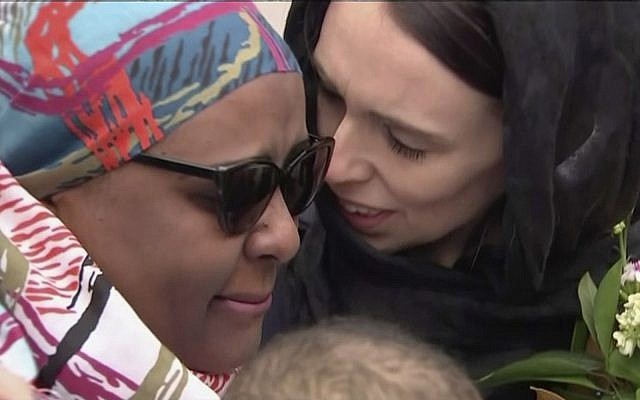 Since the moment I first woke up on Friday morning to the news of the horrific, racist mass murder in Christchurch, I’ve been at a complete loss for words.

How could such a horrific hate crime have been carried out in my beloved New Zealand? It is a country of “She’ll be right,” “No worries mate” and “Good on ya.” A country with 100 words for weather but only one word for sheep. A place of tolerance, friendship and “fush and chups.” Nothing like this massacre could ever happen here right? Yeah. Nah!

White supremacist Brenton Tarrant killed 50 people (so far — the death toll may yet rise) in two mosques with two semi-automatic rifles. He sent his manifesto to Prime Minister Jacinda Adern minutes before setting out on his killing spree and live-streamed the mass murder on Facebook.

For New Zealanders this was the end of innocence. The hate-filled rhetoric and actions that only happens in other places finally hit home.

For the first time in more than 175 years, all the synagogues in the country were closed on Shabbat. Police warned the communities that it would be a security risk to hold services, knowing that right-wing extremists who target Muslims could equally target Jews and other minorities.

This week’s Torah reading happened to be Parshat Zachor, when Jews around the world remember the hate crime carried out by the tribe of Amalek against the fledgling Israelite nation. Although they were unable to read from the Torah, the Jews of New Zealand understood that message better than ever this year.

In fact, the Kiwi response shows what a beautiful place New Zealand is.

As in other countries that suffered from hate crimes, New Zealanders also offered thoughts and prayers. The thoughts came first and foremost from the prime minister who immediately vowed to ban semi-automatic weapons entirely.

Then, when US President Donald Trump phoned Adern to offer support, her message to him was, “Sympathy and love for all Muslim communities.”

Those are the kind of thoughts that can make a difference.

And as for prayer, even though the mosques and synagogues were shuttered, New Zealanders gathered all over the country to show solidarity with the Muslim community.

The prime minister donned a headscarf and shared her grief and compassion with the Muslim community.

This is what a great leader looks like! pic.twitter.com/UBrEEO5EsE

In Wellington, a Sunday-night gathering had to be moved from the town hall to the Basin Reserve cricket ground to accommodate the thousands and thousands of people who wanted to attend.

The entire country offered assistance, protection and love to the victims and all those who felt vulnerable.

So at the end of the day I’m still reeling in shock at the horrors committed in Christchurch. The entire country is struggling to cope. But at the same time, New Zealanders have shown why they have a reputation for the nicest, kindest, most caring people in the world.

We remember Amalek so that we can try and prevent hate crime from repeating itself. Yet the world struggles to remember this message, as extremist, populist leaders win votes by demonizing minorities. That was never the New Zealand way.

As I shed a tear into my marmite sandwich, I pray that the loving, caring response of Kiwis will also be a lesson to those the world over.