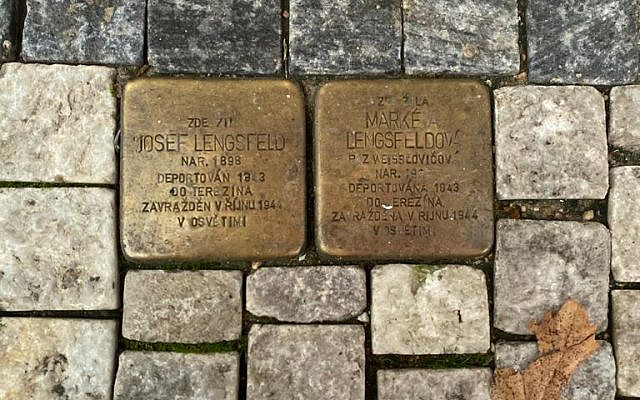 Two Holocaust stones are situated side by side near Prague's Tančící Dům landmark. Source: Allia Bukhari

It was during a night stroll in Prague’s old town when I first came across a small brass plaque, almost looking like gold, fitted into a cobblestone pavement bearing the name Marek Frauwirth “born 1911” on it. The rest of the text was in Czech, featuring a one-line description, another date and a name of place. The stone was covered in grime and rain droplets preventing visibility in the dead of the night, but the details were sufficient to give an idea that they were describing someone’s area of belonging.

Another one to catch my attention was near Tančící Dům, Prague’s famous modern landmark and the face of its contemporary architecture. In a much better condition compared to the first one I saw, this conveyed better information — which I managed to translate — stating that “Algis Sojka-Sokolovic, born in 1894, lived here”.

The rest of the details that followed sent a shiver down my spine.

Across the street, I found two other Stolpersteine dedicated to victims Josef Lengsfeld and Marketa Lengsfeldova, who once lived there and were deported to Terezin in 1943; both murdered in October 1944 in Auschwitz. Then there is one at Lazarska, Prague’s famous street known for being the intersection of all the city’s public transport, dedicated to the Prager family who supposedly once worked and lived there.

It was German artist Gunter Demnig’s brainchild to commemorate those lost to the Nazi persecution called Stolpersteine. The project was first initiated in Germany in 1996, where first 50 handmade memorial plates were fitted onto the ground in Berlin’s Kreuzberg neighborhood, carrying the names of the Holocaust victims, their year of birth, date and place of deportation and fate to remember and honor them. These blocks, forming the world’s largest decentralized memorial, have been placed outside the victims’ last chosen place of residence before they were deported to camps to work and ultimately face misery and death.

Today, these “stumbling blocks”— literal meaning when translated from German —  exist in over 1,600 towns and cities in at least 26 European countries. Some estimate their total number to be more than 85,000.

Prague is no exception and almost 412 blocks have been placed here and further 55 were installed this month, according to Trevor Sage, 61-year-old British expat looking after these stones in the city and curator of Stolpersteine Prague. Czechs call these stones Kameny Zmizelych, which translates to “stones of the disappeared”, and commemorate all the victims, mostly Jews, but also include homosexuals, resistance fighters, political prisoners, the disabled and those termed “asocial” by the Nazis.

The first Stolperstein in the Czech capital was installed by Demnig himself at Jachymova 63/3 in the honor of Max Eckstein who was murdered in Lodz, Poland.

The concept behind these stones is symbolic: to make one stop, stand in reverence and reflect. To keep the sacrifices of those persecuted alive into the memories as people make it through the day. To remember those who paid the highest price, with their blood, for their faith and identity. Ever since I found out about these blocks in the city, I have started to see Prague in a new light, where these pavements matter significantly and have a lot more social, emotional and historical weightage and resonance in the world than any pretty building or an empty piece of architecture.

For Trevor, who is not Jewish and neither had a family affected by the Holocaust, to prevent these stones from “disappearing” has become his life’s purpose. He considers it a moral responsibility to keep the memories of the victims alive in our collective thoughts and hence has taken the task of cleaning holocaust stones in Prague.

“Many of the stones I saw were dirty and it wasn’t easy to read the names. In my mind, it appeared as if the names were disappearing for a second time,” he tells me, signaling that the “transition” — as the name literally means stones of those that disappeared in Czech —  seemed sadly accurate.

According to Trevor, it has been said that Prague stood culturally on three legs: Czech, German and Jewish and the Stolpersteine project brings back into the public space the tragically lost bearers of the Jewish culture.  “The Nazi regime deprived people of their names and dignity. The Stolpersteine project seeks to return the victims’ names and present their fates in public, ensuring their names will never be forgotten,” he says.

Prague’s connection with the Jewish community is an old one. The city’s famed Jewish Quarter or Josefov dates back to the 13th century and was once a Jewish ghetto. Jews were banned from living anywhere else in Prague and with many arriving from Germany, Austria and Spain, all settled here; many were sent to Terezin concentration camp in the North. Today, six synagogues, a museum and a cemetery are located in the quarter which is visited by hundreds of people every year.

These “stumbling” stones and the quarter remind today of a dark chapter from the past: of what humanity descended into and the suffering the world has been capable of inflicting, in hopes that we choose a different path next time — of peace and acceptance, without forgetting those lost and persecuted.

About the Author
I am a journalist, mostly covering social issues and women's rights, and an Erasmus Mundus scholar currently based in Prague.
Related Topics
Related Posts
Comments