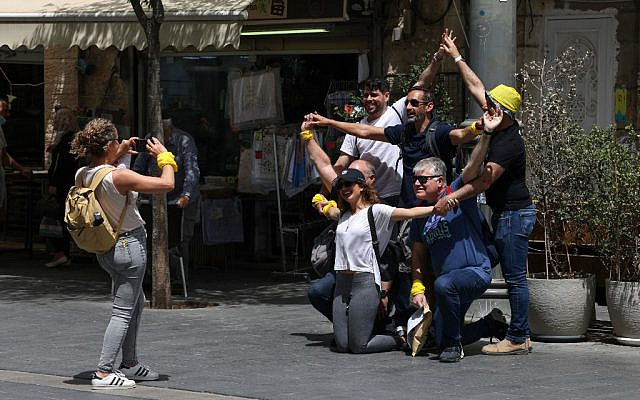 People pose for a picture on a street in Jerusalem, on April 18, 2021, after Israeli authorities announced that face masks for COVID-19 prevention were no longer required outdoors. (Menahem Kahana / AFP)

Benjamin Netanyahu’s campaign slogan “returning to life” (cribbed from the Ministry of Health’s ad to promote inoculations against the coronavirus) has been replaced by the equally alluring promise of “back to routine,” now that schools have been completely reopened, full mobility enabled and mask requirements mostly removed. Traffic jams abound, soccer fields once again boast spectators, shopping malls are packed, and workplaces are back in full swing.

Does the resumption of a routine in the aftermath of the pandemic — which has been dramatically contained, but far from eradicated — really mean the reconstitution of past patterns? Not at all. Nor does it outline the contours of what may be deemed a state of normality. Too much has changed in the lives of Israeli citizens, in their economic prospects, in their social relations, and in their attitudes towards their government during the past year. Israel, like many other countries today, is in the midst of a metamorphosis. The adjustments being made now during the transition from the abnormalities associated with the pandemic to a workable routine are key to shaping a new — albeit yet incoherent — normal.

The process of adaptation is taking place on at least three levels. The first — and unquestionably the most important — is the personal one. In many respects, the most tumultuous effect of the COVID-19 outbreak was to strip individuals of control over the most elementary aspects of their existence. The ability to decide how to conduct their lives, nurture their relationships, pursue their well-being, and interact with others was, for all intents and purposes, taken away by exigencies well beyond their control. As mobility, especially during lockdowns, was severely circumscribed, daily routines were upended for adults and children alike. Work patterns changed, as did education, leisure activities, and even eating habits. Communication avenues consequently altered relationships at home and beyond. The daily rhythm of life shifted dramatically.

Individuals reacted differently to these constraints: most adopted to the new situation by learning to live with each other under difficult circumstances. Habits inevitably changed. Some found the confinement actually reassuring, others are still dealing with its multiple traumas. In too many instances, domestic strains led to increased violence at home. Women’s lives were disrupted more than those of men — both professionally and personally. The poor suffered terribly, as did the elderly. And while some flourished, others were unable to cope with the disruptions they experienced. Very few have emerged from the pandemic unscathed. Almost nobody has been able to shed at least some of its personal effects.

The resumption of some semblance of a routine, especially by those still shell-shocked by the pandemic, has neither been uniform nor predictable. Not everyone has been able to go back to work (unemployment levels are still too high). Hybrid arrangements are replacing the tradition of office employment, although their format has yet to be determined. The content and focus of educational institutions — as well as the extent of their autonomy — are undergoing changes to deal both with the emotional and social needs of pupils, as well as their accumulated substantive lacunae. Cities are beginning to come to life, but not always in the same ways that distinguished them in the past. And the joys of the newfound freedom are being tempered by not insignificant hesitations regarding very personal choices about what to discard, retrieve, and pursue.

With these fluctuations very much still in motion, it is hardly surprising that social relations are also in a state of flux. Much has already been said about the social changes brought about during the height of the COVID-19 pandemic. Alongside the persistence of what has been described as Israel’s unique brand of tribalism (beyond gender, differentiating socially, economically, and politically between Arabs and Jews, religious and secular, Ashkenazi and Mizrahi), many cross-cutting connections were forged that have the potential to break some of these patterns — especially in the interaction between different communities at the local level.

The reopening of social spaces in recent weeks appears to have accentuated both old affinities and new connections. Just as fanaticism on the extremes is raising its ugly head once again in the most nefarious ways (suffice it to note the soaring number of attacks on Arabs and ultra-Orthodox citizens), cross-cutting coalitions are also being forged around specific issues. Growing violence is no longer considered a problem associated only with the Arab community, but as a widespread social phenomenon requiring countrywide action. The same holds true for violence against women — a subject constantly lamented, but poorly addressed for too long. And socioeconomic divisions, consistently, seem to have a much greater impact than the tribal discourse and perceptions so carefully nurtured, primarily for political purposes, in recent years.

It is still unclear the extent to which communal identities will continue to determine social interactions. What is increasingly evident is that citizenship is becoming a vital construct in the formation of societal solidarity. The formula for achieving an inclusive balance, sensitive to social identities, is very much still in the making.

There is a greater realization today that these personal and social processes, however unformed, are closely related to power relations. The coronavirus magnified the crisis of confidence that has accompanied the political turmoil of the last few years precisely because, almost imperceptibly, it enhanced the dependence of all Israelis on the formal institutions of government. Inevitably, people relied on official directives during the height of the pandemic. For over a year, they suffered from the government’s indecisiveness, its inability to make decisions and abide by them, and its befuddling changes in policy. They have also benefited immensely from its ability to provide vaccinations to mitigate the health crisis (although many are fed up with the persistent reminders they have had to endure on the topic).

Recovery from the repercussions of the pandemic undoubtedly involves governmental intervention. But this cannot be effective without a restoration of confidence in the decision-making apparatus. Some of this lost faith may be recovered by a clear plan of action on the socioeconomic and security fronts and by a steady hand at the helm backed by a binding moral compass. In Israel, however — unlike perhaps in the United States, New Zealand or Taiwan — such a possibility is unobtainable without a reshuffling of power relations, both horizontally and vertically.

This process will take some time, during which civil society and local efforts will play a significant role in determining priorities, recalibrating relationships, forging a new public discourse, and pursuing potential opportunities. In the meantime, a power-sharing arrangement can be instituted to at least attenuate some of the ill-effects of recent mismanagement and impose a modicum of order in the common domain.

A period of transition is by definition fraught with uncertainty — although in this instance it is less unpredictable than the health crisis that brought it into being. It is also bursting with activity and oftentimes unusual creativity. Israel is now in the midst of such a transformation — one which relates to past patterns but diverges from them in important respects. The way Israelis conduct their routine in the coming months will have a critical bearing on the consolidation of their new normal — far beyond the immediate task of establishing a ruling coalition — in the post-Netanyahu era. Energies directed at all levels to this most crucial of challenges can make all the difference to the shape, content, values and direction of Israel in the years to come. 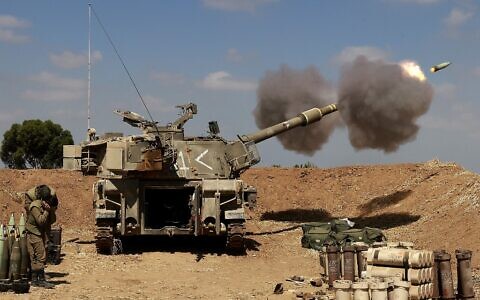 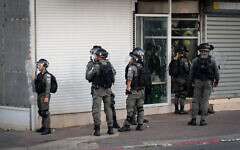