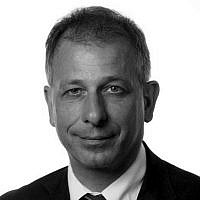 The Blogs
Wim Kortenoeven
Apply for a Blog
Please note that the posts on The Blogs are contributed by third parties. The opinions, facts and any media content in them are presented solely by the authors, and neither The Times of Israel nor its partners assume any responsibility for them. Please contact us in case of abuse. In case of abuse,
Report this post.

On Monday evening, Dutch Foreign Minister Frans Timmermans (Labor Party) started his first official visit to Israel and the territories governed by the Palestinian Authority. This provides for an occasion to review the much celebrated Dutch-Israeli relationship, which has known some dramatic, surprising and confusing developments lately, especially after the fall of the previous Dutch government last year.

That government (October 2010 – April 2012) was a coalition of the Peoples Party for Freedom and Democracy (VVD, center-right liberals) and the Christian Democratic Appeal (CDA). Together, VVD and CDA had a 52 out of 150 minority in Parliament, but their coalition was supported ‘from the outside’ by the outspoken pro-Israeli and anti-Islamic Party for Freedom (PVV) of Geert Wilders, adding 24 seats in exchange for concessions in domestic affairs and resulting in a slim majority of 76-150.

The government’s policy declaration to Parliament, issued in October 2010, emphasized its intention to “invest” in the relationship with Israel. This immediately materialized. The Netherlands became an outspoken ally of Israel in the international arena. In addition, the Dutch government secretly tried to revive negotiations between Israel and the Palestinian Authority following the Amman crisis of January 2012. The Dutch not only provided a venue, they also held separate talks with Israeli Prime Minister Benjamin Netanyahu and Palestinian Authority Chairman Mahmud Abbas. Yesterday, the Dutch daily NRC Handelsblad revealed that these secret talks, code named ‘Blue-Green,’ involved Dutch Foreign Minister Uri Rosenthal and VVD Foreign Affairs spokesman Han ten Broeke. Apparently, the Dutch initiative lasted at least a year, from February 2012 until March 2013, with Ten Broeke acting as a special envoy.

The pro-Israeli “investment policy” of the previous Dutch government culminated in a declaration on April 5, 2012 that a Dutch-Israeli Cooperation Council was to be established. Its first joint cabinet meeting was scheduled for June 7 2012 in Jerusalem.

Two weeks later however, Geert Wilders pulled the plug on the coalition, forcing the government to resign and call for elections. A government under resignation is not supposed to proceed with or develop policies that might be perceived as controversial. As such, the Dutch-Israeli Cooperation Council was put on hold and the June meeting was cancelled.

Elections were held on September 12 and upended the Dutch political landscape. The CDA Christian Democrats went down from 21 to 13 seats and Wilders’ Party for Freedom from 24 to 15. The Liberal VVD however, went up from 31 to 41 and Labor, which is traditionally hostile to Israel, went up from 30 to 38. The result by default was a coalition government of VVD and Labor, which immediately put the Cooperation Council in the deep freeze. At least, that is how it was perceived by the Dutch Parliament and the media.

Dutch-Israeli relations are a constant and very emotional factor in Dutch politics, in both the positive and the negative sense. Following the coalition crisis of April 2012, the Christian Democrats modified their platform, shifting more to the left and adopting a less friendly approach vis-à-vis the State of Israel. This clearly emerged last week, in a plenary debate on the Israeli security barrier. Parliament had been forced to debate the issue, following a public campaign of Christian Democratic ‘prominent’ and former Prime Minister Dries van Agt, one of Holland’s most notorious anti-Israeli activists.

In that debate, CDA Foreign Affairs spokesman Pieter Omtzigt not only harshly criticized the location of parts of the security barrier, he also vehemently attacked Israel’s settlement policy, calling for the imposition of “red lines” regarding further settlement construction. Omtzigt even suggested that if Israel failed to comply, the association treaty between Israel and the European Union ought to be suspended or even terminated. His faction subsequently voted against a resolution of three other opposition parties (SGP, Christian Union and PVV) that stated that the barrier, “being an important defensive instrument for the protection of Israeli civilians, constitutes no cause for the imposition of (international) sanctions against Israel.”

The VVD voted in favor of the resolution, with its spokesman Han ten Broeke arguing that the barrier might be [partly] illegal, but that it is legitimate. However, due to the CDA policy shift, the resolution was defeated 64-86. This was a clear victory for Van Agt, who has been lobbying his party for years in order to make it join the anti-Israeli camp.

Thirteen years ago, Van Agt started a fact-free and very emotional crusade against Israel, calling for boycotts and sanctions. He systematically accuses Israel of violating international humanitarian law and of refusing to execute UN resolutions, even if these cannot be unilaterally executed by Israel, such as Security Council resolution 242. He characterized the Jewish State as a “rottweiler” attack dog, while he himself has expressed support for Hamas, which states in its charter that all Jews ought to be exterminated. Several years back, Van Agt established the so called ‘Rights Forum’, which is basically an instrument for anti-Israeli lawfare in which over a dozen prominent Israel bashers have been united.

There is a disturbing overlap between the board of Van Agt’s ‘Rights Forum’ and relevant people at the Advisory Council on International Affairs (AIV), an official advisor of the Dutch Parliament and Government and residing at the Dutch Foreign Office. Some names: John Dugard, a former special rapporteur of the notorious UN Commission on Human Rights, former FM Hans van den Broek and former Dutch ambassador in Beirut Nicolaos van Dam.

The results of this overlap emerged last April, when the AIV published a 47-page advisory opinion on the Middle East peace process, its English version bearing the title “Between words and deeds: prospects for a sustainable peace in the Middle East” . Despite its lofty references to international law and justice, it is nothing but a vicious indictment of the Jewish State; ignoring the Islamic root of the conflict; omitting crucial historical data; denying or omitting the legal rights of the Jewish people in Palestine; and manipulating facts, figures and UN resolutions. It is silent on Israel’s terrible dilemma’s, predicaments and territorial constraints, and it even ignores such essentials as the Islamic threat and Palestinian incitement against Israel and peace. In its conclusion, the AIV calls for the imposition of sanctions against Israel and for establishing (Dutch and EU) relations with Hamas, which is an organization that calls for the genocide of all Jews. This is Van Agt speaking.

This dreadful advisory opinion of an official government advisory council is in the pocket of Foreign Minister Frans Timmermans on his first official visit to Israel and Palestinian Authority governed territories. In last week’s debate in the Dutch Parliament, Timmermans himself characterized his visit as one to get acquainted with the situation on the ground. Just that. But again, nothing is what it seems. Much to the surprise of Dutch Israel watchers and no doubt of the anti-Israel voices in his own party, Timmermans started off his visit meeting Benjamin Netanyahu last Monday night and reviving the Dutch-Israeli Cooperation Council.

That’s good news, but what about the AIV advisory opinion calling for sanctions against Israel? It will be difficult for Timmermans to totally reject an advise from an official advisory council of the government. On the other hand, there is no way that his VVD coalition partner would accept adopting the document. Han ten Broeke already suggested that it be filed.

After his return from Israel, the Dutch Foreign Minister is supposed to officially comment on the document. Subsequently, there will be a Parliamentary debate on both the advisory opinion and the government’s appreciation of it. The outcome will probably reflect the Dutch policy line vis-à-vis the embattled Jewish State for years to come. One should therefore hope that Timmermans’ Israeli counterpart has taken serious heed of the document and that he has done the utmost to show the Dutch Foreign Minister that its malicious content does not reflect reality and that it certainly doesn’t serve justice and peace. Timmermans will need that in order to survive the criticism that is bound to come from his own party. To this Israeli information effort should also have been added a informational visit to the Green Line where it runs only 15 kilometers from the Mediterranean. It is essential that Timmermans personally observes that what is part of the malicious AIV advice: rendering Israel indefensible by turning the Green Line into an international border.

About the Author
Wim Kortenoeven is a public affairs consultant for Wingate Public Affairs & Consultancy; He was a Member of the Dutch Parliament for Geert Wilders’ Party for Freedom, worked previously as a journalist and as a pro-Israel lobbyist, and has written books on Hamas and the roots of the Arab-Israeli conflict.
Comments