This was a sticker we found this week when we arrived at a temporarily abandoned outpost of the “hilltop youth.” (Yes, the same hilltop youth who injured me and others in April 2017.) “Maoz Esther” is adjacent to Kokhav HaShakhar, the home of a settler with whom I have had several endless loop Facebook dialogues. His bottom line is that if non-Jews in the land of Israel don’t want to be killed or expelled, they must agree to peace on the terms laid out by Maimonides in the Mishna Torah, Hilkhot Melakhim. Basically, they must become tribute paying vassals.

Both the sticker, and Rambam’s prescription for dealing with non-Jews can be traced to this week’s Torah portion, “Shoftim.” We are taught how to fight our enemies, how to lay siege, and given the above-mentioned terms for peace. We must be even harsher to the 7 Canaanite nations.

Is that the only way to understand our Torah portion?

Is that what we believe God wants of us?

Is that how we want to live?

On one foot, the rabbis taught that the seven nations no longer exist, and these rules of war refer to those who are our enemies. The command to wipe out the seven nations was connected to specific abominable practices of theirs, some of which are also detailed in this week’s portion. Many, if not most Jewish legal authorities through the generations have acknowledged the right of non-Jews to own property in the Land of Israel, and have ruled that it is forbidden to harm them or steal from them. We are also taught in Pirkei Avot d’Rabbi Natan that even mightier than the person who controls his/her desires (as we learn in the better known Pirkei Avot) is the person who turns an enemy into a friend.

Are the non-Jews with whom we today share the Land of Israel destined to be our enemies for all eternity?

Today, are we working to turn enemies into friends, or to turn potential friends into enemies?

There have been at least four new outposts set up around the Kokhav HaShakhar and Rimonim settlements in the last two months or so, depending on how one counts. All settlements are illegal if one believes that the Fourth Geneva Convention applies in the Occupied Territories. (Israel says it doesn’t). However, outposts are also illegal in the eyes of the Israeli government. Unlike the settlers of Maoz Esther, the State of Israel acknowledges that the land in this area is privately owned Palestinian land.

Maoz Esther is an old-new outpost. The army removed it last week, but one structure was rebuilt the next day.

Another veteran outpost is “Ma’aleh Shlomo.” They have a flock of sheep that they allow to enter fields owned and planted by Palestinians. As I have written previously, some of the Palestinians have lost as much NIS 30,000 this year alone from such theft. We didn’t succeed in getting security forces to stop it. After we took to scaring off the settler shepherds by photographing them, they responded by setting up a new outpost in the midst of cultivated Palestinian land. When authorities prevailed upon them to move, they moved east of Rimonim, where they have been terrorizing and apparently stealing. When I recently informed the police that we had permission from the Palestinians shepherds from Eyn Samiyah to notify them that we would be accompanying the shepherds to lands that the they had been afraid to access for years because of the Maoz Esther, I said that if we were thinking of accompanying Palestinians to their lands next to the outpost below Rimonim, we would again ask permission to notify the police. A police officer told me that we must inform them, even without permission because, “With those settlers your life will be in danger.”

Last Friday and on Tuesday we made the long trek to avoid Maoz Esther and get to amazing grazing land not far from Kokhav HaShakhar. We felt good about ourselves and happy for the shepherds. The security forces we had notified seemed to be making sure that we were safe, and we were. We also had some really good exercise! 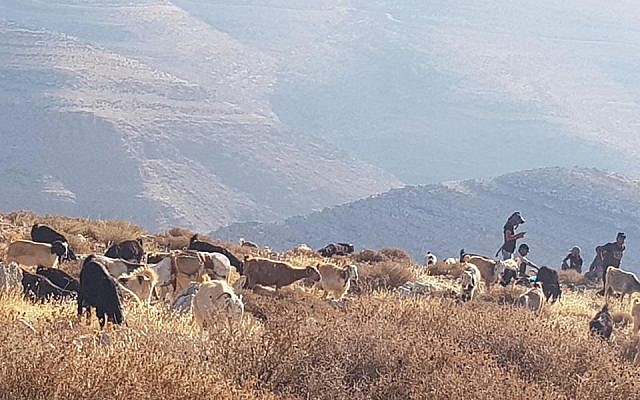 The feeling was short lived. Just a few hours after we returned home on Tuesday, we were told that a new outpost had been set up near the grazing area, and that the shepherds were uncertain about going up, even with our presence. I saw the sticker when we and Palestinian activists went up alone to determine how safe it would be for the shepherds. Apparently, the new/old outpost had been abandoned for an even newer one. 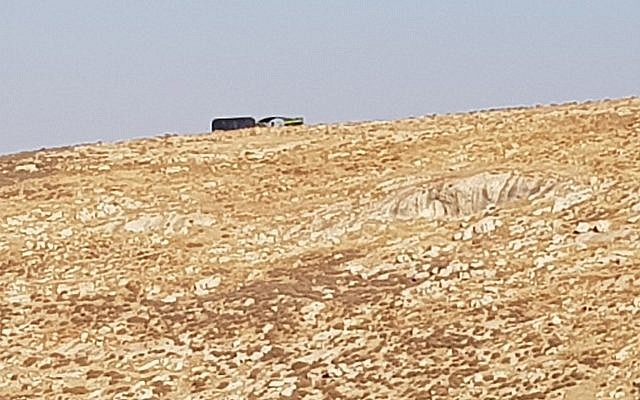 Security forces followed us to the outpost, and then made sure that we left the area. One soldier and I engaged in a long conversation. His heart was in the right place and he wanted to be just to all, but shared the stereotype that we in the activist community care only about Palestinians. When I explained the work that we do for public housing and socioeconomic justice for Jews, he said, “You seem to be an exception.”

The land in question is apparently owned by the residents of Kufr Maleq, whose mayor accompanied us. We are taught in our Torah portion, “You shall not trespass over your neighbor’s borders, that earlier generations set up on the property that will be allotted to you in the Land that Adonai your God is giving you to possess.” (Deuteronomy 19:14) Generally this is read to mean that the borders set up when we entered the land were to be honored. However, and I admit that I am stretching the text a bit, it could also be read to mean that, even if we are to be given the Land, we don’t steal property of those who are not of the nations we are specifically commanded to wipe out because of their deeds.

Ibn Ezra comments that trespassing and stealing the land of others leads to “conflict, violence and murder.”

So, I ask again, by taking trespassing and taking over private Palestinian land, are we showing that we have the ultimate power to turn enemies into friends, or are we ensuring that potential friends will remain/become enemies? As we take a deep look at ourselves in this month of Elul, do we wish to be a society that uses state or civilian violence to prevent shepherds from successfully grazing their sheep? Is this what God wants of us?

The God I believe in is the God of the first verses of our Torah portion, “You shall not judge unfairly,; you shall show no partiality….Justice, justice shall you pursue, that you may inherit and thrive in the Land that Adonai your God is giving you.” (Deuteronomy 16: 19-20) Our sages asked why “justice” twice? I believe that we will thrive and live in the Land when we impartially pursue justice both for Jews and for non-Jews. 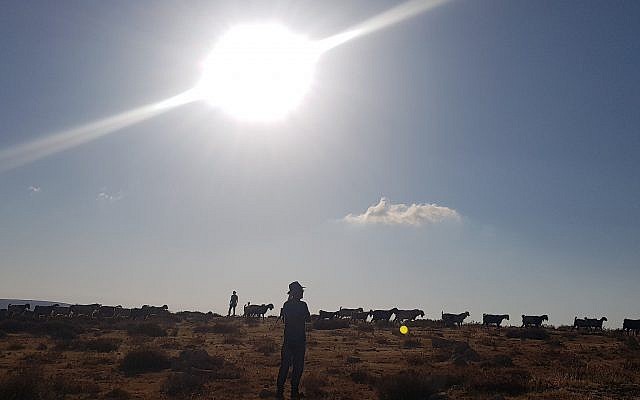