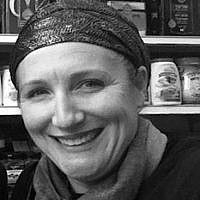 The Blogs
Marianne Tanzer
Apply for a Blog
Please note that the posts on The Blogs are contributed by third parties. The opinions, facts and any media content in them are presented solely by the authors, and neither The Times of Israel nor its partners assume any responsibility for them. Please contact us in case of abuse. In case of abuse,
Report this post.

It has been a while.  A while since something so simple moved me so greatly.  Where I had to pinch myself and say, “Yes, that just happened!” followed by the clichéd but true statement “Only in Israel.”

One of my household chores this week was reappraising the items in our home for insurance purposes.  Upon the adjuster’s arrival, he asked how old the house was.  I did feel a small quiver run through me when I replied “HaShana,” proud of myself for taking part in the true toil, even if it wasn’t with my own hands, of building a house in Israel. Not only that, but I was also proud of myself that I could manage this simple conversation in Hebrew without asking him to repeat himself constantly.  Finally.

The adjuster began counting items in my home, ticking off numbers to himself under his breath, in Spanish.  Knowing even the most basic Spanish is requisite in my old home turf, Los Angeles.  “Where are you from?” I asked him in Spanish.  Argentina, he tells me.  Kibbutz galuyot, I think and smile to myself.

As we proceed with our appointment, many words I know in Hebrew, but not all of them. At these moments, we break off into English.  First we speak in neither of our native tongues, and then we have a turn to speak in each of our native tongues.  There is something about the way language connects and divides us, creating instant bonds of kinship, as well as clear demarcations of our own boundaries.

We sit down for him to ask me some more questions.  He begins to ask me about a list of commonly owned valuables, such as silver, china, and the like. Then he asks me:  How many pairs of tefillin are in the house?  Do we own a Megillat Esther?  Do I have a wig?  These are the questions.  These are the questions that an insurance appraiser asks in Israel.  They are markers of a Jewish home, a home built in our Homeland.  Questions one would ask nowhere else.  It is a simple and sweet reminder in the mundane, daily grind of life, that we have arrived home.

About the Author
Marianne Tanzer made aliyah four years ago from Los Angeles and lives in Efrat with her husband and four children.
Comments
Advertisement