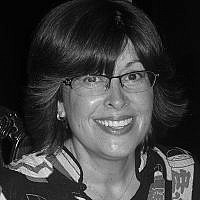 The Blogs
Judy Gruen
Apply for a Blog
Advertisement
Please note that the posts on The Blogs are contributed by third parties. The opinions, facts and any media content in them are presented solely by the authors, and neither The Times of Israel nor its partners assume any responsibility for them. Please contact us in case of abuse. In case of abuse,
Report this post.

This Friday, June 21 is the annual Take Your Dog To Work Day (TYDTWD), more evidence, as if any more were needed, that the United States has gone to the dogs.

I remember that in the old days when gas was cheap and tattoos were for tough biker types, dogs slept in dog beds on the floor, waited for someone to remember to toss them a bone now and then, and had names such as Fido or Pizza. Since then, things have swung wildly in the dogs’ direction. Today’s tail-waggers are named Zelda, Brian, or Charlene, and they have been upgraded to sleeping in their owners’ beds. Some go to therapy to help them with their “issues,” which may include being named Zelda, Brian or Charlene and having to wear miniature Burberry trench coats and Prada sunglasses. In fact, dogs no longer have owners – they have “human companions.”

I should know. I’m the human companion to Ken, an 12-year-old beagle/lab mix. When we adopted him as a pup he was equipped with both his shots and his all-American guy moniker. I thought he should have a more canine-appropriate name, like Buster, but the pet rescue agency staff forbade such a radical plan. They warned me that changing Ken’s name might create “issues,” even beyond the issue of Ken’s having chewed up the left armrest and middle cushion of our living room couch during his very first week in the house. Maybe he didn’t like the upholstery pattern?

After a grueling day at the office, Ken settles in on his (ahem, my) yoga mat.

Sponsors of the annual Take Your Dog To Work Day® (TYDTWD) hope the event will “raise awareness of the importance of the human-animal bond.” This is more than a little redundant in a society that condones such excesses as “bark mitzvahs,” “barkeries” featuring gourmet “pet”it- fours, doggy day spas, and doggy hotels. I only wish I were making this up.

I already take Ken to work with me every day, and I can assure you that he gets the better end of this deal.  Even when he’s not napping on the bed in my home office, he falls asleep in his little floor bed when I am reading drafts of my columns to test audience reaction, even during what is intended as a big laugh line. Sometimes his snores disrupt my creative thinking process. Worse, they make me want to tuck myself under the covers, too.

I am glad not to have to prove my “canine companion” chops by bringing Ken to a real office on TYDTWD, because he would get one or both of us fired immediately. He would lift his leg on an expensive potted plant, missing the plant but getting the carpet instead; sniff up everybody in sight, lingering a little too long on the boss’ pant leg; and nose through unattended briefcases, happily filching sandwiches from deep inside. He is liable to emit noxious fumes during meetings, and would rest his snout on anyone’s lap who was eating a muffin, staring with those pleading eyes for a piece of the action. This might be considered “workplace muffin harassment.”

I’m not complaining, though. Ken has provided vastly amusing and salable material for several columns and even a quote on a Starbucks cup. The quote said: “Have you noticed that dogs are the new kids? You take a walk with your kid and your dog, but nobody says, ‘What a cute kid!’ Instead they say, ‘What a cute dog! What’s his name? Is he a rescue?’ Maybe if I put a collar and leash on my kid someone will notice her.” No human subject ever brought me such awesome, yet fleeting publicity on more than 5 million coffee cups.

I actually sympathize with people who become emotionally addled by their dogs. There is so little loyalty in today’s world, either from employers to long-time employees, from baseball players to their home teams, heck, even from spouses to their mates. In these circumstances, who can resist the unfailing, innocent and refreshingly predictable loyalty of a dog? Who can resist loving up a creature who remains blissfully ignorant of our character flaws and loves us no matter what?  Dogs are so faithful and accepting, in fact, that they keep loving you even if you make them wear a Burberry rain slicker.

About the Author
Judy Gruen writes about culture, family, Jewish growth, and why bad contractors happen to good people. The author of four books, her work has also appeared in the Wall Street Journal, Chicago Tribune, Los Angeles Times, and 10 book anthologies. She is a regular columnist on Aish.com, and her most recent book "Till We Eat Again: A Second Helping." She is an active member of Aish HaTorah Los Angeles.
Comments