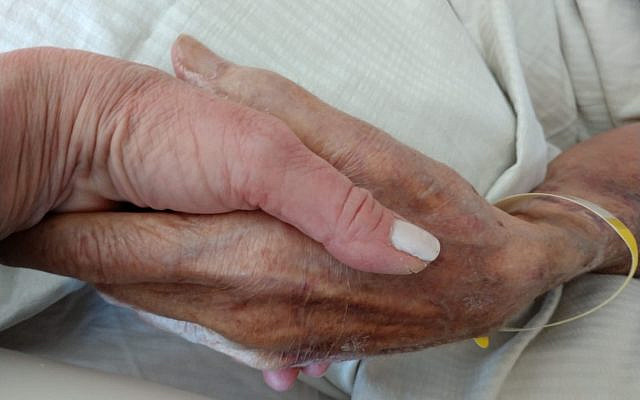 Photo of daughter and father by Madelyn Kaye-Sikoryak

We lost Dad the day before Thanksgiving, nearly three years after Mom passed. The Angel of Death did not cheat us when he came calling. Dad was 96, Mom 92.

By us, I mean my older brother, my twin sister, and I. Writing this is less a tribute to our parents, more an offering for us three — a rainbow following a flood.

Mom’s death came as a shock. Though frail, and wrestling with dementia, she was in overall good health. One morning shortly after New Year’s, a blood vessel burst in her heart, and she was gone by early afternoon.

My siblings and I were living in other parts of the world as the ambulance took her to the hospital. Dad stayed home and was not there to hold Mom’s hand in the end.

The day of the funeral was crisp and clear.  Dolores’s sons and granddaughter did her proud with their eulogies. The mourners went beyond the customary one shovel of dirt each over the casket; we filled the grave to the top without a backhoe.

Sadly, our seven-day shiva was marred by a breakdown over differences in religious observance between my brother and me.  The harsh words and hard feelings, mixed with the trauma of Mom’s passing, led to a deterioration in our relationship that stumbled into hostile silence. Mom was no longer there to help mend fences, Dad wasn’t up to the task, and my sister, hard as she tried, could not pull us back together.

Dad carried on in his New Jersey home with support from part-time caregivers. A lover of life, he was determined to enjoy his final years in the same way he had lived his previous ones, driving where he pleased to shop at his favorite market, or fish in the Atlantic Ocean.

My sister split her time between her homes in Florida and New Jersey, took charge of paying Dad’s bills and arranging caregivers’ schedules, having learned from the example Mom set when her own father was old and fragile. Dad didn’t always appreciate my twin’s help, but she persisted.

Shortly before New Year’s, Dad injured himself in a fall and was taken to the hospital. I came from Wisconsin to bring him home and stay with him as he recuperated. Two weeks later my brother arrived to join him and my sister for the one-year anniversary of Mom’s death. I was already gone, my brother and I missing each other like warships passing at sea.

Dad’s fall marked the beginning of a steady decline. For the next year, he shuttled  from home, to hospital, to rehab center, to home again.

My wife Judith and I, meanwhile, decided to move to Israel and began the aliyah process at the end of 2018. The silence between me and my brother, who had moved to Israel decades ago, was so profound that I did not share the news of my impending move with him, and he did not send me any message of congratulations.

I’m writing this out of grief and longing, but also with thanks that my father’s decline helped repair the rip in our family.

Counseling, together with my wife’s and sister’s loving prods, helped me come to terms with my anger and hurt. However, it was news early last summer that my father was back in the hospital that prompted me to phone my brother for the first time in nearly two years.

“Is something wrong?” were his first words. “Are you and Judith okay?”

We talked a bit about Dad, nothing much else.  So began a careful détente, which led to our reunion this past August at Ben Gurion Airport when Judith and I landed with a plane full of new olim.

During Judith’s and my first months in the country, my brother and I met to break bread in my Tel Aviv apartment, walked the city’s streets and swim in the Mediterranean. We flew side by side to New Jersey in early November to visit our father in a rehab center.

Upon our arrival, we found Old Daddy Loy Loy in a wheelchair, eating in the center’s dining room. He seemed responsive and happy to see us, but that night, he wound up in the hospital emergency ward bleeding internally. When they moved him to a regular room after a few days, it was clear that he was dwindling and could pass at any time.

As difficult as it was to see him in such a state, I also found it life-affirming to have my siblings at my side as we hovered over Dad in his bed.  Avoiding any talk of religion, and politics, my brother and I stayed strong, even found a way to kibitz with our sister in the hospital.

Now, as I prepare to mark the end of shloshim, the 30th day following Dad’s passing, a significant marker on the calendar of mourning in Jewish tradition, I hope to have an easier time grieving for my father during this first year than I did for my mother.

Now, as orphans, my siblings and I begin our lives anew, carrying on together,  in our parents’ blessed memories.