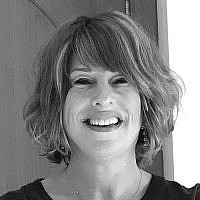 The Blogs
Madelaine Black
Creativity That Matters
Apply for a Blog
Advertisement
Please note that the posts on The Blogs are contributed by third parties. The opinions, facts and any media content in them are presented solely by the authors, and neither The Times of Israel nor its partners assume any responsibility for them. Please contact us in case of abuse. In case of abuse,
Report this post.

In this current conflict the odds are that someone on “our side” is likely to die very soon.
A civilian? A soldier? A child? A family? At the time of writing this piece, thank God, nobody yet has died.

The first casualty may be followed by others. As each fatality transpires, so our national consciousness of the crater of pain and the void that their death has effected will diminish; as it always does.

Home Front Command and our national leadership are repeatedly asking that individuals and organizations should resist using their social media and websites to publicize where the rockets fired by Hamas and their cohorts have landed. Yet the internet is bursting with posts and headlines that describe the destination. This hazardous online phenomena is playing into the heinous hands of Hamas’s rocket launchers; enabling them to intensify their assault and to improve their accuracy . And it is putting lives at risk.

Whilst our major news outlets are acting responsibly, people out there- yes, maybe it’s you, and you know who you are!- you are tweeting and posting like headless chickens. You are creating a race to be the first to announce where, when and how each deadly missile makes its entrance into our airspace, and lands in and around our towns.

In war someone has to die.

Home Front Command is saying that Tel Avivians should continue going to their cafes, stores and work. The rationale behind this directive is that the aim of terrorism is to spread terror, so that maintaining routine lives is the best way to overcome that terror. Yet each time each of us goes online to spread the word of a failed or successful hit, or the gathering of civilians in public shelters, we are inadvertently inviting further terror. This increases the likelihood of the breakdown of the functioning of our everyday society, and risks injury and death to ourselves and to others.

When we play directly into the hands of our enemies by broadcasting the locations and effects of their hits and misses, we are aiding and abetting their offensive.

We live in an impulsive and dangerous age. In our urge to show that we are at the center of the action, that we are the first to know, that we are “in” , that we are “there”, or even just to show that we care. We tap the keyboard and we push the “send” and “post” buttons, and we put it out. Maybe our friends will be impressed ? Maybe our professional and communal credibility will be enhanced ? Maybe our donors will send us a check? But maybe someone out there will be encouraged to launch another rocket and try for another direct hit? And maybe, God forbid, someone will lose their life as a result?

We Jews have never been very good at allowing our leadership to do their job. We jostle, discuss, dissect and challenge. Every stage in our history and every parsha of our Bible is testimony to this endemic. That poor old Moses kept his head together for as long as he did is one of our greatest miracles!

Our modern political system and our open democracy stokes and invites the disrespect and battering of our leadership. It’s a national free for all. But now, when we are in the middle of a perilous war, we must respect and listen to our national leaders. Yes, Israel is one big global family and we are all in it together, but our Government and the IDF are in command. And if they tell us to resist giving a 24/7 online running commentary of the action, we must listen and do as they say. Whether we are based in Israel or abroad.

This Shabbat, whether or not we are Shabbat observant, let us each take off 25 hours from sending out virals and blogs and alerts from our gadgets and laptops. Let us leave it to our Government and the responsible national media to say what has to be said, and to inform us of what we need to know. As Shabbat departs we will restart our multimedia devices; hopefully to see the news that the war is over and that no one further has been hurt or killed. But if, God forbid, this conflict is still playing out into another week, let us resist the temptation to share and spread the details out there in the public domain.

In a war someone has to die, but we can each play our part in ensuring that they don’t by desisting from broadcasting and sharing the details of the conflict. We should of course continue to discuss and debate the issues amongst ourselves, but let us leave the running commentary to our leadership.

Because in this war, no one needs to die.

Could this be the first Israeli war in which no Israeli soldier or civilian dies?

If we behave with online restraint and respect for our leadership, we could be moving into a new beginning where the seeds of hope and unity would begin to take root.

About the Author
Madelaine Black is an award winning Creative and Marketing Consultant with a reputation for creating pioneering, bold, successful, brands and campaigns that promote Israel and Jewish causes. Her work was the subject of a BBC documentary. Madelaine and her family moved from London to Jerusalem in 2007.
Comments