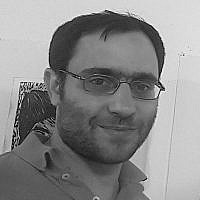 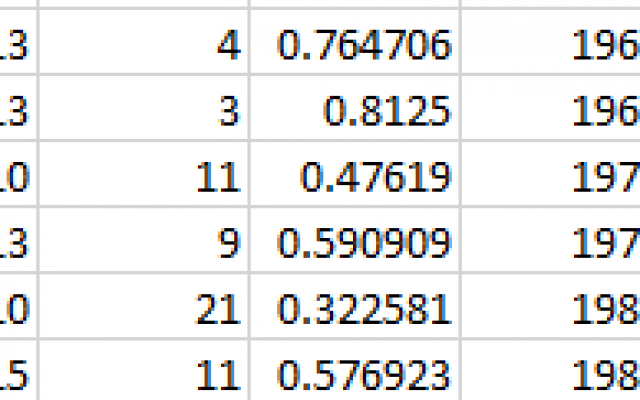 In between my more substantive articles explaining the ins and outs of the electoral system, I’m also going to be publishing lighter posts pointing out mathematical, historical, and legal errors in Knesset reporting and punditry. (I was originally going to call it “Nonsense of the Day”, but felt that was too harsh – though I reserve the right to use that headline if somebody says something wildly ridiculous.)

How many party lists make it into the Knesset?

The previous record of parties was registered in 2009, when 33 parties aimed to enter the Knesset. On average, about half of registered candidate lists pass the election threshold.

This is actually true, but misleading. Yes, the average number of lists that get enough votes to make it into the Knesset, across each of Israel’s elections, is about 55%. However, by simply stating the average you are hiding a steady downward trend: from 70% in the country’s first two decades to 40% in its last two. 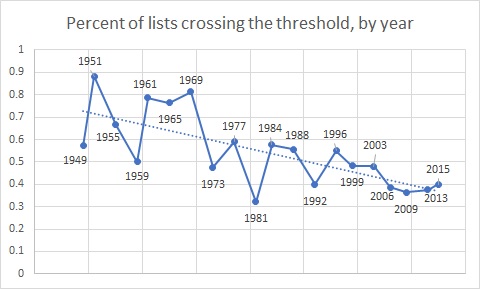 What’s causing the decline? It’s tempting to say that increases in the Knesset threshold are the reason. Over the years, the minimum percent of the vote required to get Knesset seats has been raised from 1% to 3.25%. It would make sense if fewer parties successfully crossed it as it kept increasing.

But this theory doesn’t hold up to scrutiny. There was no sudden, massive drop each time the threshold was raised: 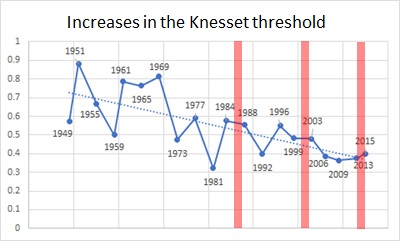 So what’s the actual cause? Simple: the number of party lists running in the election. The number of lists that make it into the Knesset has remained remarkably consistent since 1949: it’s always 10-15, regardless of threshold size or other factors. But the number of lists in the running has been on a steady upward trend: 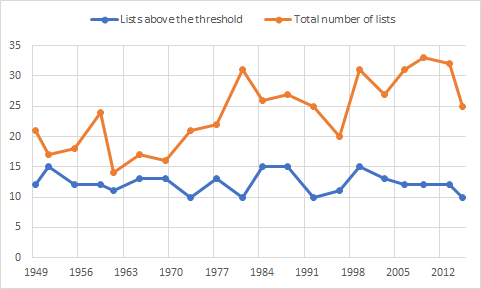 I’m particularly fascinated by the fact that the increases in the threshold seem to have had little or no effect. This surprised me – until this moment I (and everybody I know) took for granted the assertion that they brought more stability to the electoral system by limiting the number of parties. And while it is true that we haven’t had a fifteen-list Knesset since the threshold was raised to 2% in 1999, it’s probably too early to say if that’s actually due to the higher threshold or just a coincidence.

The minimum electoral threshold required to enter the Knesset is 3.25% of the vote, meaning that the fewest MKs a party can have in the Knesset is four. Because of this requirement, parties often submit a joint list, and then after the election split into different factions in the Knesset.

There are two people reading this who think they already know what this is about. But I want to focus on the second sentence. Because, so far as I can tell, it is entirely made up.

Parties “often” submit a joint list, and then after the election split into different factions, in order to get around the 3.25% threshold? The 3.25% threshold was passed in 2014 and has been used for precisely one election so far (2015). And not a single party in that election did what the article is describing.

Yes, some parties in 2015 (Hatnuah, Tkuma, some or all of the Arab parties) sought out mergers in order to avoid falling into oblivion. But not a single one of these split off into a new Knesset faction once the election was over. Their alliances carried over into the day-to-day activities of the Knesset.

It’s hard to know what the article’s author had in mind. Hatnuah and the Arab parties did end up dissolving their respective alliances – but only at the very end of the Knesset, in advance of the current election, which is precisely the opposite of what is being described. The Otzma LeYisrael and Yachad parties arguably were planning to do this when they ran on a combined list, but we’ll never know because they failed to cross the threshold. And while the two charedi parties that make up UTJ are constantly threatening to divorce each other, they’ve never actually done so aside from an end-of-the-Knesset tactic to increase their public campaign funding.

Even going back to the 2013 and 2009 elections, when the threshold was lower and such a tactic would be less justified, there are no examples. The closest is the marriage of convenience between the Likud and Yisrael Beiteinu in 2013, but even that alliance lasted a year and a half after the election, and new elections were held only eight months later.

As far as I can tell, there is only one recent example: the “technical bloc” under which three right-wing parties (Jewish Home, Tkuma, and Otzma Yehudit) are running together in 2019, with the explicit understanding that the last of these three will be splitting off from the other two immediately after the election. But this seems to be a new idea – or, if it is an old one, it dates back to when the Knesset threshold was much lower.