Ed Asner in the recording booth (The voice from the movie Up, and plays the charachter Lou Grant from the Mary Tyler Moore TV series) 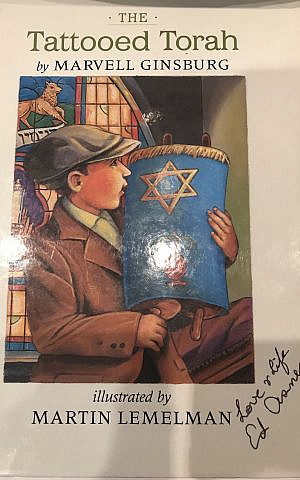 Autographed copy of The Tattooed Torah. Ed signs his name with Love and Life!

Our Day With Ed Asner

We have had so many highlights making our film The Tattooed Torah. It’s difficult to say which is my favorite. If pressed I’d have to say the day we spent in the studio recording Ed Asner’s voice. It was not only a top ten moment in the making of our film but a top ten day in my life…

We started the morning at Art’s Deli across the street from the recording studio. Apparently Art’s has seen it’s share of movie stars over the years. After nervously waiting, drinking copious amounts of caffeine and reviewing the script, Brett Kopin (my son and co-screenwriter), Marc Bennett (co-screenwriter and director) and I walked across the street to the studio. We were met by Lisa Effress (our producer ) and her assistant Brittany. Shortly thereafter Ed arrived with his voice coach Nick.

I was completely star struck. When Ed uttered the first words of the script there was a hush in the studio, we all had the chills. I cried silently and Brett giggled. Ed brought my mother, Brett’s Bubby’s work to life.

Ed read every sentence three times. Nick’s coaching turned out to be incredibly helpful, getting the absolute best performance out of Ed. Each reading was slightly more perfect, then Ed would hit it out of the park. A true pro. The reading of the script took 3.5 hours. I’m told  one line with an actor can take an entire day. Ed spoiled us.

Ed is funny, sarcastic, kind, warm, cooperative, sometimes a curmudgeon and sharp as a tack, he turned 90 this month. It was fun between takes. We took turns going into the sound booth, taking photos, speaking with Ed and asking him to sign his autograph. He loved the screenplay. While taping Ed suggested a few minor changes which were significant, subtle and appropriate. He respectfully asked us how to pronounce certain words, what emotion we were going for in certain scenes. He was curious about Marvell’s name, how she got it and how it was pronounced. At the end he wrapped up by booming her name over the mike. I was sad when the session was over.

Our team members are all incredibly creative, hip and fun. They are top in the industry and all were grateful to be part of such a meaningful project. This film project transcended all the static noise (faith, levels of observance, political ideologies), that holds many of us back. It  brought our team closer to the Jewish community, Judaism and Holocaust education.

Our film is unique, a 21 minute animated short. Our intention is to have it seen by the young alongside adults in museums, schools and homes. Keeping it short is better suited for classroom viewing and follow up discussions. We are calling it an “animated short” as we are entering it into festivals including the Oscars, under the category animated short.

Since our premiere last month we have been flooded with screening requests and are now entered in several festivals. We are organizing a calendar on upcoming screenings and have created a website Thetattooedtorah.com which will soon list the screenings and festival.

We are forging a new path in digital Holocaust Education for the young. We created an entry level digital tool to educate the young about the Holocaust, teaching respect and tolerance for people “other” than themselves. Our plan is to create an educational module, which will accompany the film intended to be used by educators.

I’m not sure exactly what it feels like to be in a state of Nirvana but I think I was in it. Bless You Ed Asner for bringing our script to life…