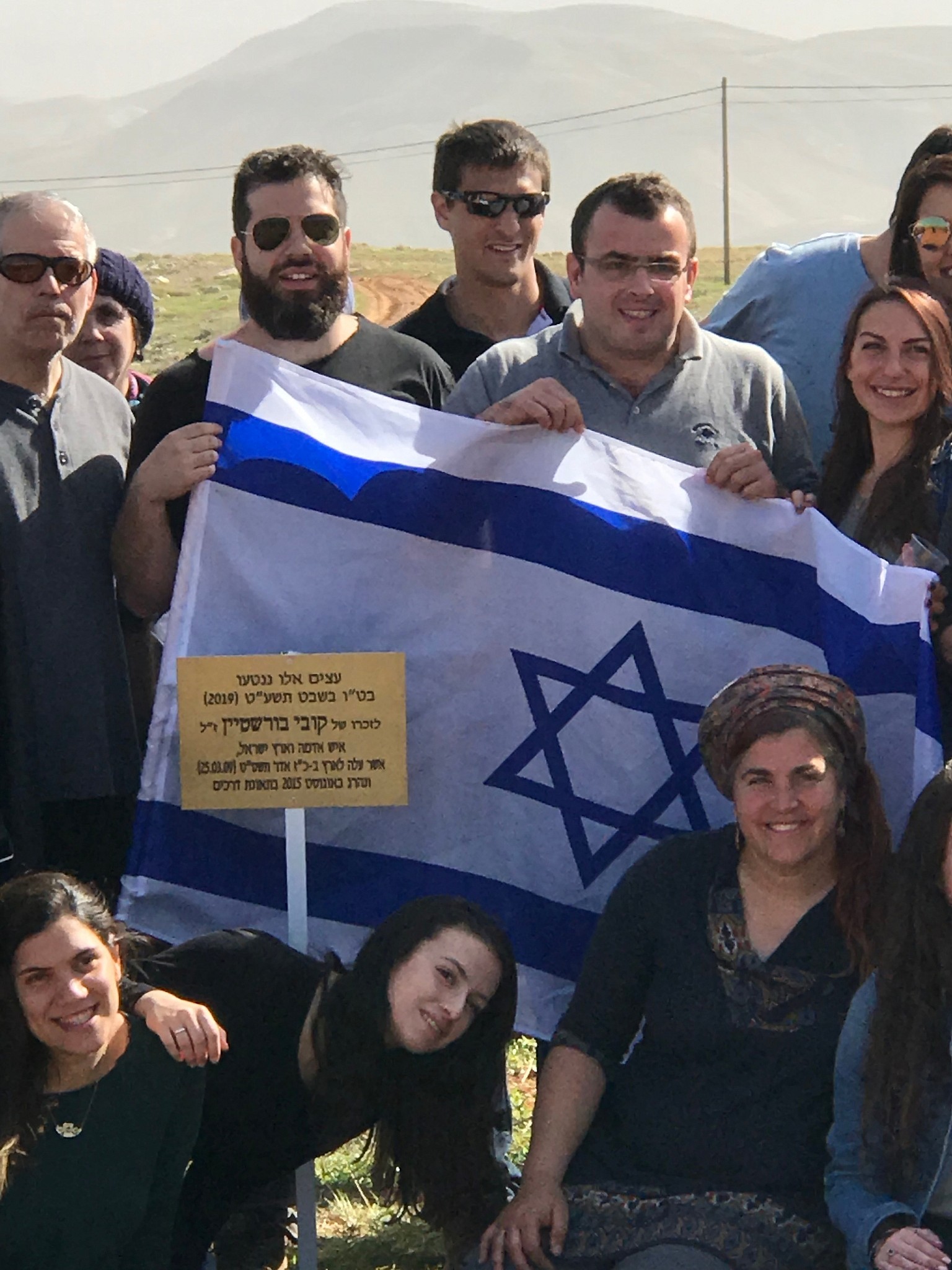 Tu B’ Shvat tree planting group holding Israeli flag and a plaque honoring a young man who served in the army and died soon after in a car crash. 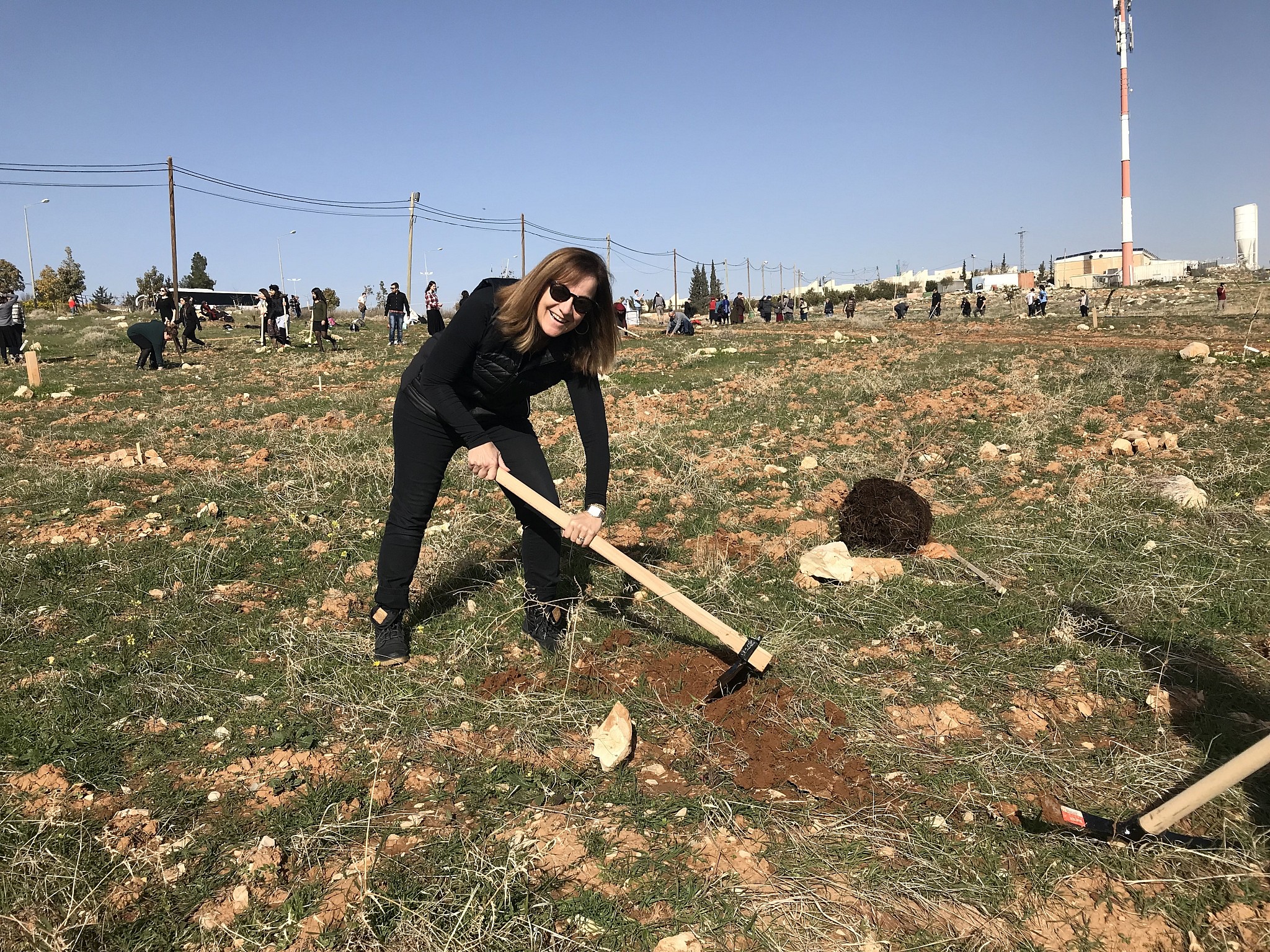 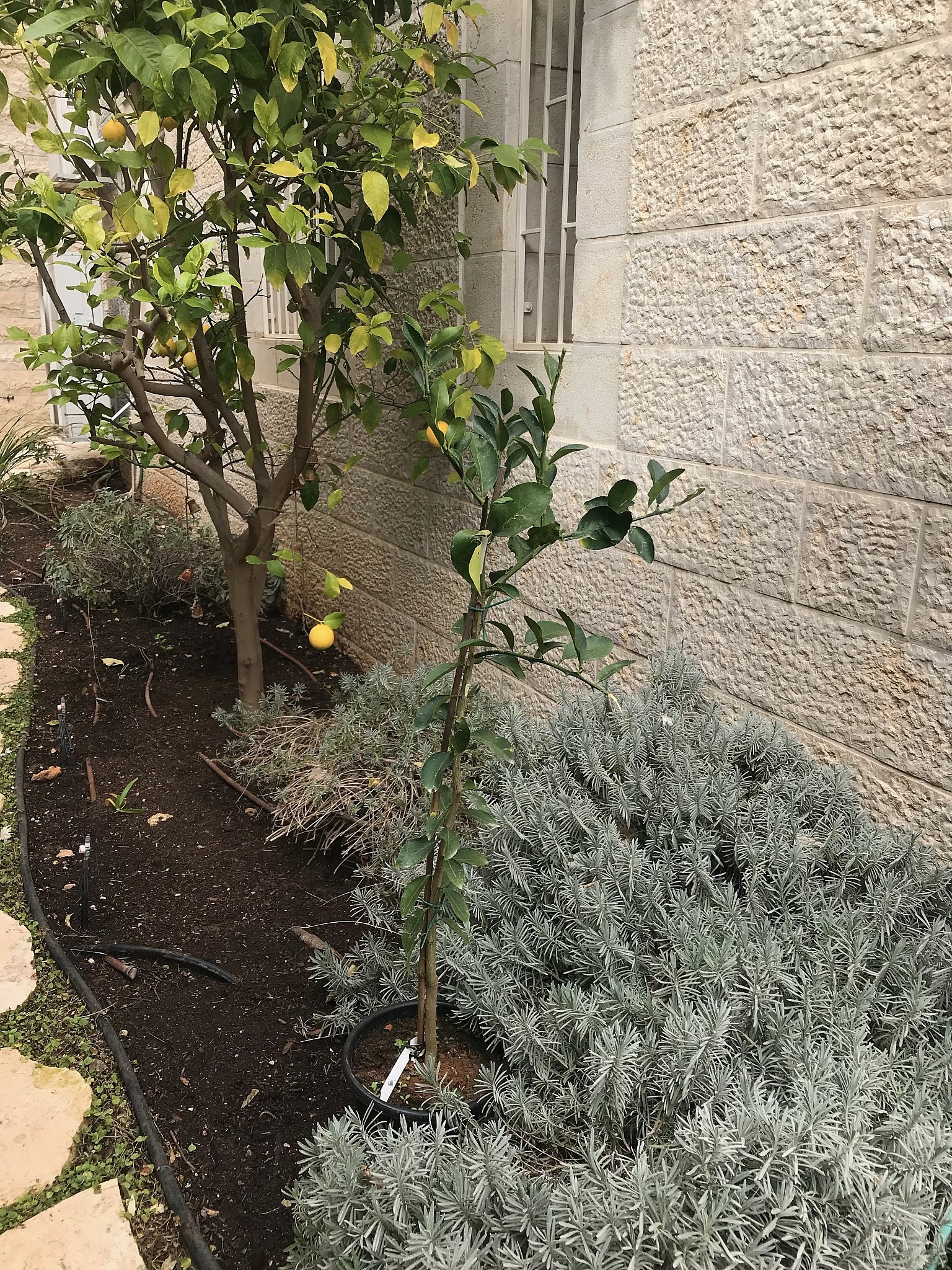 “Just as my ancestors planted for me, so I will plant for my children.”
Babylonian Talmud

I have always had a fondness for Tu B’shvat, the holiday celebrating tree birthdays. I was born end of January, a few days before Tu B’Shvat, and was almost named Elana (Hebrew female name meaning sapling).

In grammar school, prior to Tu B’Shvat, we would put quarters into slots in a special card provided by JNF (Jewish National Fund). JNF is an organization whose main mission is planting trees in Israel. When the card was full we bought a sapling. Afterwards we were sent a tree certificate with our name on it. We were proud. Countless Zionist organizations world wide adopted the same initiative. Israel has large forests throughout the land, in some measure due to that brilliant initiative of small children planting trees each year.

It was difficult to comprehend the importance of planting trees in Israel especially knowing I’d never see my tree. Planting trees was one thing… but how do you explain to a little girl living in Chicago the Jewish calendar celebrating the tree birthday in January amidst the snow and ice? There was a song we sang in Hebrew on the holiday with gusto. It never made sense to me. Here is a rough translation…

Tu B’Shvat is here,
holiday of the saplings,
the almond tree is blooming,
the sun is shining…

After we finished renovating our garden apartment I made a point of going to Israel for my birthday. I wanted to visit the Kotel (Western/Wailing Wall) and give thanks for my abundant blessings. It has since become a tradition. It’s exhilarating to mingle on the womens’ side of the wall. I stand with ultra religious, secular, and non Jewish women, all coming together in prayer and contemplation.

Upon arriving to our home I walked across the living room, stepped out on our deck and said a quick shehechiyanu (prayer of gratitude) then broke out into laughter. Our brand new almond tree was blooming! I sang my childhood song. It finally made sense. Early February is the beginning of spring in Israel!

I recently had two extremely meaningful encounters with trees. I landed a few days before Tu B’Shvat and a favorite lone soldier/friend of ours invited me to a tree planting expedition on the holiday. I jumped at the chance. We drove to an open field just outside of Jerusalem. There were many volunteers and two hundred saplings in buckets. The day was filled with laughter, music, and a spread of fresh and dried fruits. The saplings were donated by a father in memory of his son who had been a lone soldier. This young man tragically died in a car accident soon after he finished the army. All four of this father’s sons made Aliyah (became citizens of Israel) and served in the Israeli army. I was humbled by this man’s courage and strength. I dug the earth and helped place a sapling in the ground in his son’s memory.

Soon after my husband and I invited five couples to join us at a new restaurant for my birthday celebration. Some of these friendships span my entire life. We shared an amazing meal accompanied by flowing wine and animated conversation. I was presented with a lime sapling in a bucket decorated with a ribbon. An incredible Zionist present. I was stunned…I could visit my birthday tree! I said to our guests, “Thank you, we’ll have you over for mojitos when the tree matures.” Attached was a small label stating the tree was two years old. There are Jewish laws which pertain to tending the land and harvesting the fruit. Our environmentalism spans three thousand years respecting the soil and trees. By celebrating our trees we mark their ages.

We are a tribal people. Originally wanderers and shepherds, now agrarian and high tech. I appreciate seasons, cycles of growth, and spring rains in a way I never had before living in Chicago. Our garden ties us to our land, to G-D, the Bible, and our People.