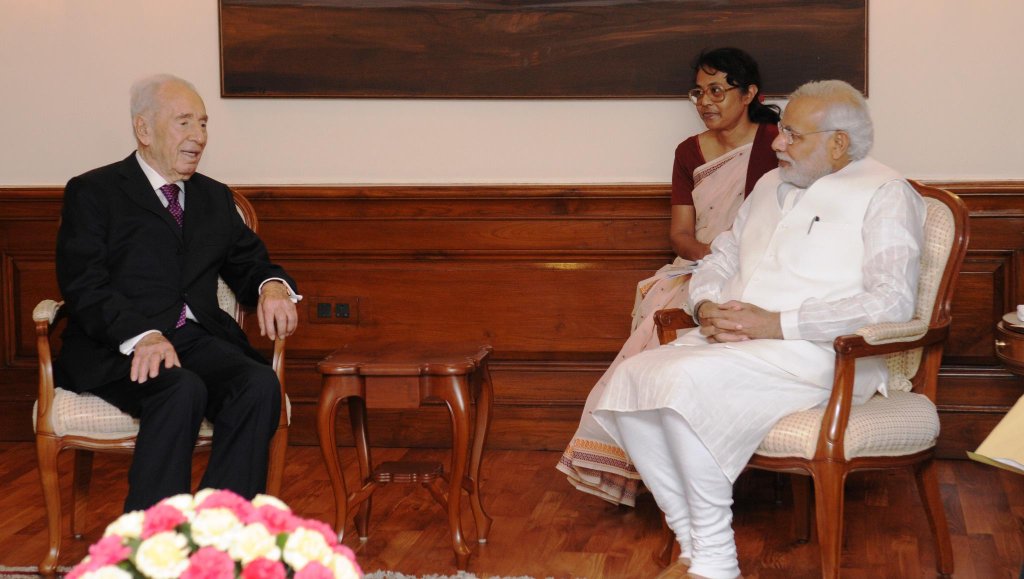 The Democratic States of India and Israel were born during the same era of late 1940s. Amidst the churning of the venom of colonisation, the foundation of two democracies was an exception to the generally accepted trend of Socialist autocracies that swept the decolonised world at that time. It was itself a reassurance of the faith in the liberal and democratic values by our founding fathers. The ‘Founding Father’ of India, Mahatma Gandhi believed that the Jewish people have a good case and a prior claim for Israel. ‘Hindu Mahasabha’ leader Shri V D Savarkar and ‘Rashtriya Swayamsewak Sangh’ leader Shri MS Golwalkar welcomed the birth of a legitimate Jewish homeland and believed that Israel was the natural territory of the Jewish people. Since then, the alleged Hindu orthodox organisations have been vocal towards support of Israel in the Middle Eastern region and beyond with successive lobbying to modify India’s foreign policy in favour of Israel.

India officially recognized the State of Israel on 17th September, 1950 (also the birth date of current Prime Minister of India, Shri Narendra Modi). The then Prime Minister of India, Shri Jawahar Lal Nehru remarked, “we would have [recognized Israel] long ago, because Israel is a fact. We refrained because of our desire not to offend the sentiments of our friends in the Arab countries.” (Source – India’s Israel Policy, by P R Kumaraswamy). Due to the hesitance to offend the Arab partners, Israel was allowed to open only one Consulate in Bombay (now Mumbai). But the distance between the two inevitable close friends could not go far beyond 1992, when India and Israel established full diplomatic relations after the hesitations of the past (particularly of Nehruvian legacy) were abandoned to pursue a deeper engagement. Since then, the relationship has grown multifold and expanded the horizons from political, defence and economic engagements to tourism, science and technology, agriculture and cultural paradigms.

Culturally speaking, there have been many similarities in Judaism and Hinduism, both being non-appreciative of religious conversions. Mythologically, either it is too difficult to embrace Hinduism and Judaism ‘legitimately’ or there is a blanket ban on conversions (depending upon the phases of time). Moreover, Hinduism, not being a religious faith but a way of life, it is open to practice, but the Vedic conversion process is either too difficult or impossible per se, especially in the form of acceptance by the orthodox Hindu community. This common trait ensures Hindu orthodox groups to be vocal in supporting the Jewish homeland and their nationalistic and legitimate claim for the accession of Jerusalem and the region of Israel. Not many in Israel know about the fact that ‘India is the only country in the world where there has not been even a single case of anti-Semitism in its history of 2,000 years of engagement with the Jewish people’, despite the fact that India is a multicultural, multilingual and multi-religious society. The ethos of our secular spirit echoes in our resolve towards acceptance and not just toleration of multiculturalism.

There is a healthy trend that indicates the growth of professional, cultural and economic ties between the two countries. The areas of cooperation started from Environmental protection, combating illicit trafficking, abuse of narcotic drugs and psychotropic substances, visa free travel for Diplomatic, Official and Service Passport Holders, Health and Medicine. This cooperation has travelled through the roads of time to include cooperation in Space Technology, counter terrorism, defence manufacturing, exchange programmes to boost people-to-people contact via academic, political, artistic and scholarly engagements.

The economic ties stand at a bilateral trade of $5 billion annually. There is a proposal of a Free Trade Agreement (FTA) which is under the process of negotiation and expected to be signed during the upcoming visit of Prime Minister Narendra Modi to Israel. If experts are to be believed, it has the potential to double the value and volume of the current bilateral trade.

India has been an attractive tourist destination for Israeli tourists, especially after their stint at the Israeli Defence Forces. The most famous tourist destinations include Himalayas, where the tourists seek peace and tranquillity under the sky of perpetual cosmic energies. The number of Israeli tourists arriving at such tourist cities can be figured from the fact that many of the signboards and shop boards are written in Hebrew and the locales are comfortable and welcoming to the tourists with the spirit of ‘Atithi Devo Bhava (Guest is the God)’. However, the tourists from India to Israel had been minuscule in number. This could be attributed to the ignorance and unfamiliarity of Indians towards Israel, as a tourism hotspot. But in the recent years, India surpassed South Korea as the top Asian source of incoming tourism to Israel in 2010. Statistics of 2010 showed that the average tourist expenditure in Israel totalled $1,091, whereas the average Indian tourist spent $1,364 in Israel, totalling an income of about NIS 200 million (Source – Globes).

In terms of muscle and power, currently, India is the largest importer of Israeli defence equipment in the world and Israel is the second largest exporter of defence equipment to India after Russia, but the trend may soon see a reversal with the possibility of Israel securing the first place, especially if the trends of defence purchases under the current Indian Government are to be believed. But the defence ties are not at a nascent stage but dates back to 1960s. During the establishment of Research and Analysis Wing (R&AW India), the primary external intelligence agency of India in 1968, the then Prime Minister Smt. Indira Gandhi suggested the new Chief of R&AW, Shri R N Kao to cooperate with Israel’s Mossad for the establishment of a decisive and effective counter intelligence operative agency in India. The results of the cooperation are evident with the successful operations against the forces who aspire to decimate the peaceful existence of the State of India. There has been enough evidence in public domain regarding the defence cooperation between India and Israel, but more of such cooperation remains clandestine. The then Finance Minister of Israel Mr Yuval Steinitz in an interview to The Times of India newspaper said “our relations with India may be second only to the very special relationship we have with the US”. (See the full interview here)

According to a 2009 international study commissioned by the Israeli Foreign Ministry, the greatest level of sympathy towards Israel can be found in India, with 58% of Indian respondents showing sympathy towards Israel (Source – Ynetnews). This trend saw an increase of up to 70% of Indians showing sympathy for Israel in 2015, especially after the arrival of new Government in India under the leadership of Prime Minister Narendra Modi. Since independence, Indian education system has highlighted the horrors of holocaust, disgraced the period of heightened anti-Semitism and promoted the idea of acceptance and embracement of peace towards all communities. Likewise, Israel has embraced their minority groups into the blanket of acceptance, peace and affection for the balanced development of the society. Such a policy of equality, fraternity and justice to all, can only be found in a liberal, secular and democratic State. Therefore, both the States of India and Israel have passed the tests of democratic credentials every time they were examined by the forces who seek attrition of peace in our immediate neighbourhood.

Surrounded by ruthless theocracies, autocracies and communal societies, sometimes operating under the garb of ‘nascent democracies’, both India and Israel have promulgated the use of dialogue and cooperation. But the occasional application of judicious force was necessitated only to protect our vital security interests. Even then, the practitioners of violence through terrorism, proxies and intimidators, cries foul in the name of human rights violation and violent retreat to maintain status quo. This foul play needs to be exposed, especially on multilateral forums. Unfortunately, few organisations that have lost relevance and credibility with time also succumb to the false and half-baked propaganda by the false propaganda machineries working in tandem with such ruthless States. India and Israel needs to join hands to counter the ideological warfare that is breeding inside the dens of few self-proclaimed liberals and scholars around the world.

To accommodate mutual concerns, we need to strengthen people-to-people contact by promoting visa relaxations, academic exchanges, cultural cooperation and exploration of tourism which is currently undermined by the forces of unfamiliarity. One such measure is to promote a cultural organisation, built on the grounds of British Council and Alliance Francaise who work to promote the British and French culture respectively in the host countries. We could operate such customised cultural organisations in both India and Israel with libraries and cultural centres attached alongside the Consulates and Embassy Office spaces.

With the alignment of interests to the exercise of realpolitik in the contemporary world, India and Israel are indispensable partners of the 21st century. With the advent of the most pro-Israel Government in the history of modern India under the leadership of Prime Minister Narendra Modi and the decisive leadership of Prime Minister Benjamin Netanyahu, the time is ripe to push this formal cooperation to a full-fledged close partnership. A partnership that leads the world into a better future, amidst the gloom of uncertainty, violence, terrorism and most importantly the pessimism that engulfs the liberal societies.

We have a history of successfully tackling complexities and we will do it in the future too by doubling our capabilities through this partnership. Amen!