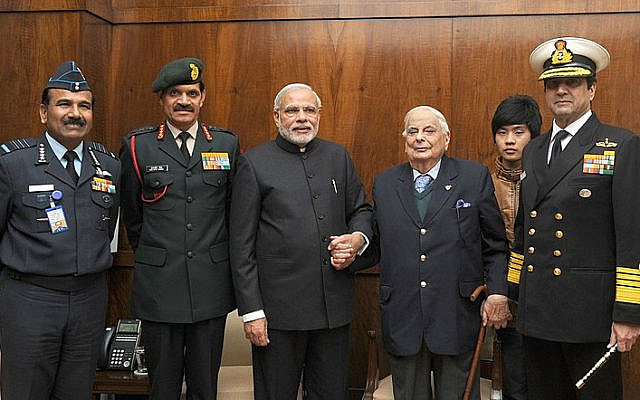 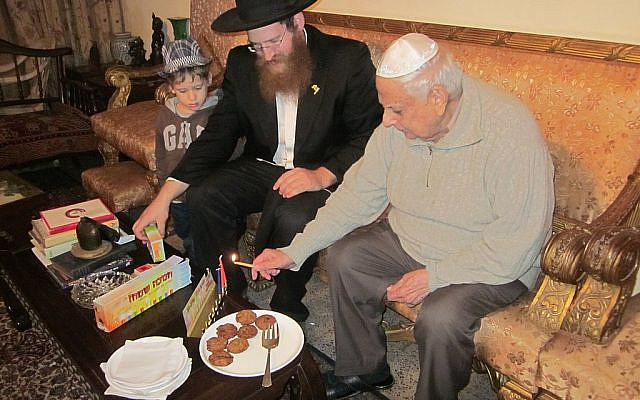 Among the civilisations of the ancient world India has had an important place, Gautama Buddha “The Light of Asia” in the words of Sir Edwin Arnold attained enlightenment and gave his first sermon precisely on this land, teaching the world the value of peace. India’s pacifism, made us a beacon for world peace, but also costed us dearly, from Huns, to Scythians, from Persians, to Greeks, from Turks to Mongols, from Afghans to British and from Portuguese to French invaded and ruled a part of this ancient civilisation or sometimes the whole of it. The Jews came to India not as invaders but as sharers in the glory and traditions of their adoptive land. Persecution, discrimination and selective amnesia in the world about the pain of the Jews, made them well aware about what India was going through during the years of foreign invasions. India slowly emerged from it’s pacifism and lethargy and broke the chains of servitude, in 1947 and on 15 August of that year The Republic of India was born. Unfortunately India was divided after independence on religious lines, by the British. Though India remained a multi cultural secular democracy, a fanatic Islamic state was born on its West and East known as Pakistan. The idea of “Ghazva-E-Hind” or enslaving India for the cause of fanatic Islam was dominant in Pakistan from it’s independence from Britain in 1947 itself. Like the extremists sitting in Gaza fantasising about imposing Jiziya on the Jews of Israel and conquering Jerusalem. The extremists in the Islamic Republic of Pakistan, imagined of doing the same on non-Muslims in India and conquering the Red Fort in Delhi instead. A false theory about superiority of the Pakistani army over the Indians was being taught in Rawalpindi to, the future soldiers of that country. When Pakistan was created it was said, there is no racism in Islam and therefore different nationalities can live peacefully as Muslims in that country, but it was far from truth. Pakistan was  made up of two parts West and East Pakistan separated by India. While West Pakistan was dominated by “fair skinned people who as per their believes were  descendants of Arabs, Turks and Afghans and rest other fair skinned, tall and strong nationalities” the East Pakistanis were dark skinned Bengalis who as per the faulty martial race theory, of erstwhile British rulers of Pakistan, were considered weak and not suitable to rule over themselves, forget about entire Pakistan. In the 1970 elections in Pakistan Sheikh Mujibur Rehman famously known as “Bangabandhu” in Bangladesh, attained majority and was legally chosen to become the Prime Minister of Pakistan, but the racist government in West Pakistan and the Pakistani army did not let this happen. Pakistani army started the genocide of innocent Bengalis on the grounds of race, in total 10 Million Bengali refugees fled to India as refugees.

THE LION OF JUDAH AT THE LINE OF DUTY 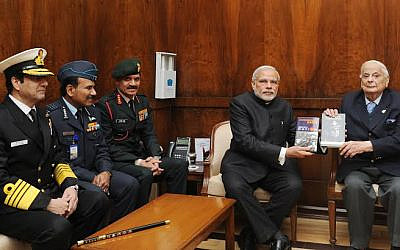 It was the need of the hour to teach the West Pakistanis a lesson, and Indian Army decided to intervene. At the beginning of April 1971, Chief of the Indian Army General Manekshaw called  INDIA’S LION OF JUDAH, one of the bravest warrior in the annals of Indian history Lt. Col Jack Jacob ( Jack Farj Rafael Jacob ) and told him that the Indian government required the army to move to East Pakistan soon. It was Lt. Col Jack Jacob who played an important role in the biggest military victory India has after independence in 1971, he trained some 400 naval commandos in the upper reaches of river Hooghly to fight the West Pakistani occupation forces. 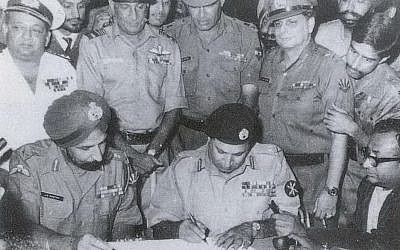 On the morning of 16 December, chief of Indian army Manekshaw phoned Jacob as per his autobiography “Odyssey in war and peace” and asked him ‘Jake, go and get a surrender’. Jacob took the draft of Instrument of Surrender and moved to Dacca. Jacob stood in-front of General Niazi the chief commander of the Pakistan Army’s Eastern Command, he read the draft of Instrument of Surender for Niazi. Niazi with tears rolling down his cheeks, said ‘Who said I am surrendering? You have only come to discuss a ceasefire and withdrawal as proposed by me.’ Jacob took Niazi to a corner and made it clear that his safety and safety of West Pakistanis in Bangladesh then East Pakistan depended on him surrendering. Jacob gave him 30 minutes to reconsider and if he did not Jacob would bomb Dacca as a result Niazi did surrender. Pakistan Army surrendered with 93,000 soldiers, which was the biggest ever surrender after World War II and the result was the birth of a new nation Bangladesh. In March 2008, Bangladesh Army invited ten officers and their wives from India, Lt.Col Jack Jacob led the Indian delegation where red carpet was laid out for the Indian heroes.

WHO WAS THIS INDIAN WARRIOR Lt. General JACK JACOB? Jack Farj Rafael Jacob was born in Calcutta India, now known as Kolkata as son of Elias and Carrie Jacob. Calcutta had a prosperous Baghdadi Jewish community, and Jacob was one of them. His great-grandmother left Syria and travelled to India via Iraq, Persia, and Afghanistan to Multan she moved sometime later from Multan to Calcutta where his mother Carrie was born. Jacob writes in his autobiography “ My parents were deeply religious people and maintained a strict Kosher regime at the table. I remember being scolded once for using the cutlery intended for milk dishes to eat a meat dish. Our family used to attend our synagogue, the Bethel, on high holidays. We had four permanent benches in the synagogue which now lie unoccupied.”

In 1930s several Jewish refugees arrived in Calcutta, and Jack Jacob’s family that was relatively affluent helped to look after a few of them. Jack his elder brother Maurice and younger brother Eric were taught in a boarding school were as per Jacob some of his British teachers were anti-semites. When the Second World War broke out, Jacob without informing his family joined the army in 1941 to fight the Nazis! He was commissioned in the Indian artillery and took part in operations in the Middle East, Burma and Sumatra. Jacob went on to become one of the greatest warriors in the Indian military history. 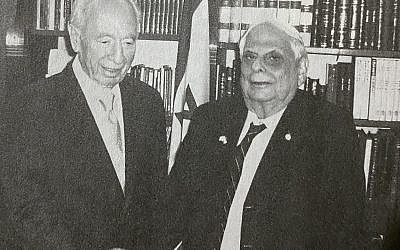 Jacob was invited to Israel for the 3000th anniversary of the founding of Jerusalem by Prime Minister Yitzhak Rabin. He was a friend of General Mordecai Gur, the then defence minister of Israel. Rabin and Mordecai Gur took great interest in the views of Jacob on a range of subjects. In 2009, Jacob was invited to attend the Maccabean games in Tel Aviv. He took the opportunity of meeting President Shimon Peres, whom he had known over a period of many years. In London he interacted with Lord Geville Janner. Janner had invited him to become patron of the Commonwealth Jewish Council back in 1980. In USA he met with the top brass of the American Jewish Committee (AJC) in four cities to enlist their support for India. 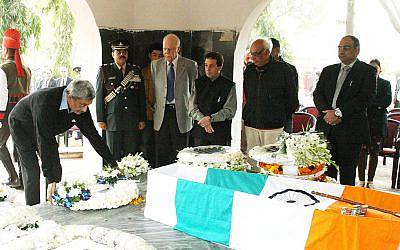 Today India is ruled by the Bhartiya Janata Party or the BJP a overtly pro-Israel and pro-Jewish party. In 1991, Jacob was approached by Professor Manohar Sondhi, to join the BJP, he considered the offer for some time and after some three months agreed to join to advice in the fields of defence and foreign affairs. At that time BJP was just beginning to develop its personality as a party, claiming to be a  ‘party with difference’. Jacob was impressed by the then President of BJP, Kushabhau Thakre, who he called a simple upright man. Jacob was made governor of the state of Punjab and Goa in India the topmost Constitutional post in an Indian state. The Vishwa Hindu Parishad, a body of Hindus was even planning to make him the President of India! India would have got a really great President in Jacob.

Lt. General Jack Farj Rafael Jacob, was indeed India’s Lion of Judah, a devout Jew he was a Param Vishist Seva Medal ( PVSM ) awardee, and one of the most important contributor in India’s biggest military victory after independence in 1971. One of the early members of the BJP which rules India now, Jacob ensured efficient administration as Governor in the states of Punjab and Goa during his tenure. Jacob was a great friend of Israel and was a a great supporter of an Indo-Israeli alliance at the world stage. When India is celebrating the Platinum Jubilee of it’s independence as an Indian I pay my tribute to my hero, India’s Lion of Judah Jack Farj Rafael Jacob. The great warrior passed away in the capital of India New Delhi on 13 January 2016. When all Indians are celebrating Azadi@75 I pray to Hashem to strengthen Indo-Israeli relations and bless the nations of India and Israel so that they by their efforts can make the world a better place to live in.

About the Author
Mr. Arunansh B. Goswami is a lawyer by profession in New Delhi India, also a historian by training. He has studied history at the historical and prestigious St. Stephen’s College in Delhi India, he has also read law at prestigious, Campus Law Centre, University of Delhi ( India ) which has given one of the highest number of Judges to Indian Supreme Court. He has worked as a research consultant with Union Minister of Steel and Civil Aviation of India, Mr. J. M. Scindia and Mrs. Priyadarshini Raje. Scindia titular Queen of the erstwhile princely state of Gwalior in India. Mr. Goswami has studied Israeli and Jewish History deeply and travelled extensively in Israel, and Uzbekistan to explore and research about sites associated with Jewish Prophets.