Two weeks ago, a serious miscarriage of justice was committed. This isn’t about legal issues — whether a community should or should not have been removed from their land of numerous years due to the “justice system” retroactively illeagalizing the place they call home. [And yes, this is happening. Just take a look at this article on the community of Nili.] This means that a place on which the government sanctioned building, where they brought in water, electricity, and other infrastructure clearly proving that these people were NOT just some crazy radicals who decided to build somewhere that they weren’t allowed, this place is *suddenly* illegal. It may not even be important to mention that only a small part of the land they were evicted from was even being ‘claimed’…yet the whole community was destroyed, from the shul, to houses, to a park which was built in the name of a murdered young chayal, whose very body saved two other small children. 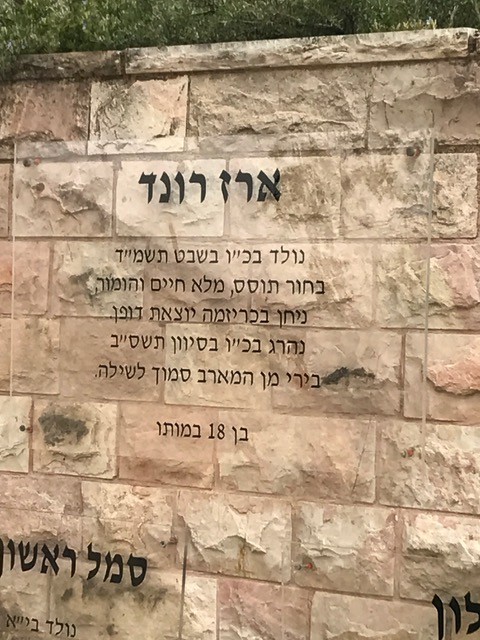 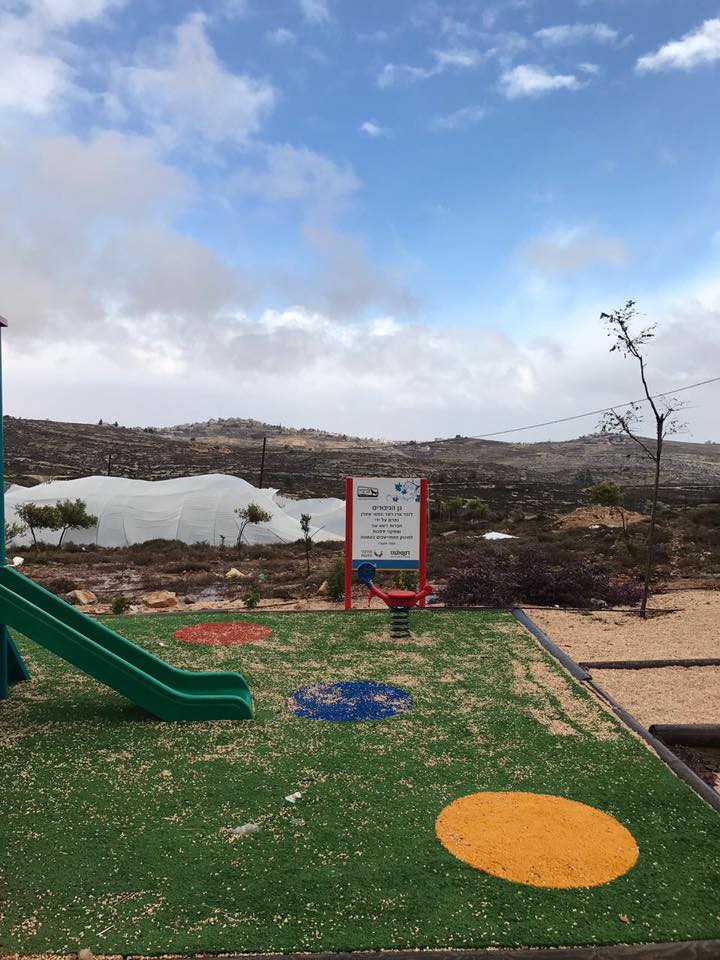 The park built in Erez’s name. Photo by Lisa Melamed 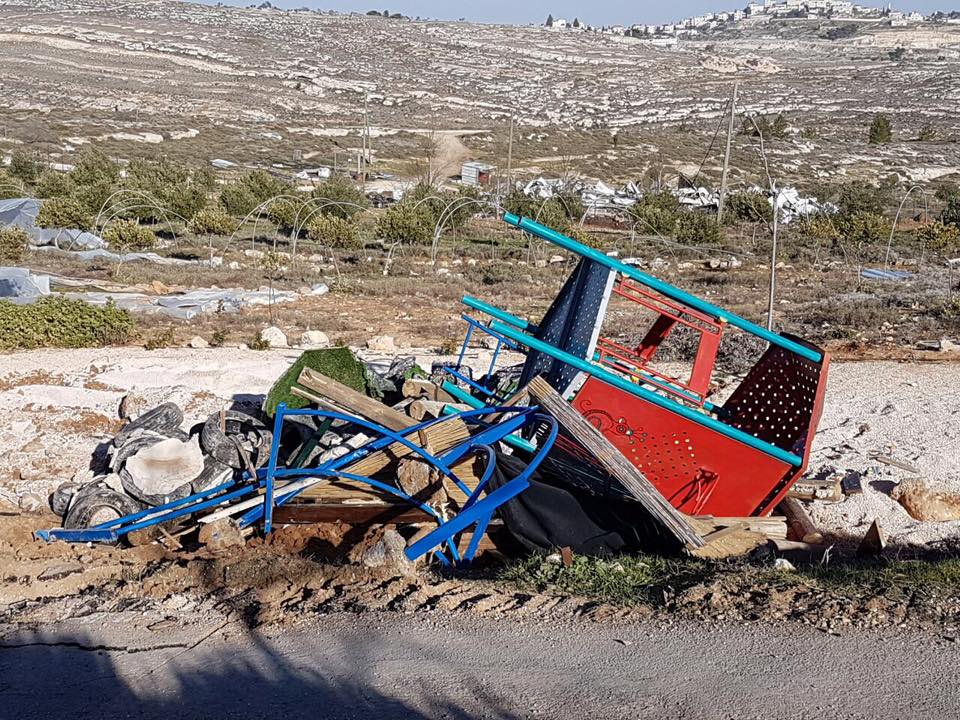 Here’s what matters. 40 families were evicted — NOT evacuated. I dislike the use of the word evacuation, because that makes it seem like it was for the benefit of the residents, as if in the face of some impending disaster which could not be avoided and therefore they had to leave for their own good. Evacuation also makes it seem like these people were being aided by our government. But no, as I understand it, they were not evacuated but rather evicted from their homes, not given enough time to pack up their things; after they had agreed to leave peacefully, they were told they would have a place to go, but the government appears to have only held up the part of the agreement wherein the people leave, without providing them anyplace to go or to put their things. [Note: the families were only loaned these shipping containers for their things, but first, this is temporary — meant to be for a few months — and as of now, they have yet to be given a place to live — and it doesn’t seem likely in the near future.

Second, as we saw from the families of Gush Katif, when the items had to be left in storage for a longer period of time, many things were ruined. This in no way replaces homes that could have been prepared ahead of time.]  There are currently whole families living indefinitely in rooms the size of a dorm — six beds and a minuscule bathroom for a family of six! 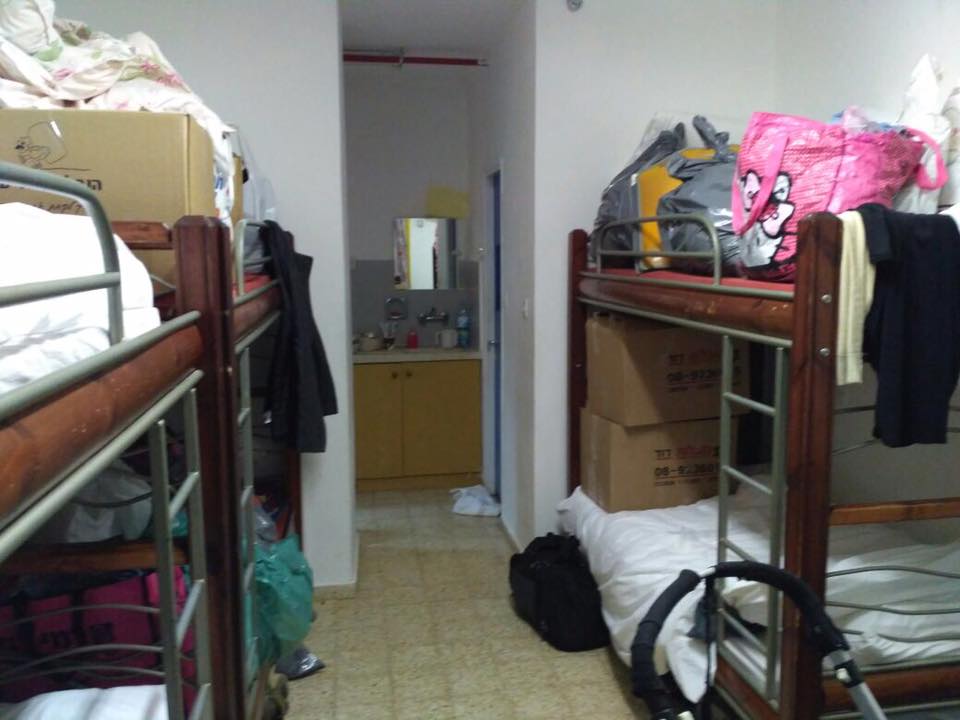 This room is where a whole family of 6 is living. Photo by Lisa Melamed

Just a few days after the eviction, a few ladies and I took a trip to the north. It wasn’t up to the Chermon to ski, to Tzfat for some serenity, or to Teveria for a nice view of the Kinneret. We only went as far as Ofra, in the Shomron area. We went to meet those people who had been made to evacuate their homes, which they had agreed to, in order to go nowhere, to which they had not agreed. We went to give them supplies and chizuk (strength), so they should know that some people are on their side.

We met one of the women living in these conditions, Ayala Goldberg, who was willing to talk with us. What she told us breaks my heart and boils my blood, and if you have any sympathy, it will make you feel for their plight as well. Ayala grew up on Amona, first visiting her brother’s house often and later, building her own. The houses and buildings now destroyed and cleared off were not all simple caravans, but real houses which these people had put their life savings into building. She and her husband had, unlike some of the others, managed to rent a caravan elsewhere once it was decided they should leave. However, they were told they did not need to pay rent until they moved in, so in the end, they lost the only place they had to go, and now live in the dorms in Ofra with their four children, from 8-years-old down to 10-months-old.

Ayala spoke of how the government suddenly, instead of giving the community extra time when they saw that THEY (the government) weren’t ready (having not prepared anywhere for the people to go), moved the eviction date UP by a week. On top of this, they sent “help” to the people in the opposite order of what would be helpful, and also not enough for all the families. They sent the storage containers sporadically, the people who could pack things before the technicians who would disconnect electrical items such as refrigerators and washers, and not nearly enough containers to move an entire community. And where are all those containers now? They are sitting around, inaccessible, and it is hard to tell what belongs to whom. So when Ayala’s daughter, for whom Ayala is trying to maintain some semblance of normalcy by sending her (and the others) to school, needed the next workbook…you can imagine how impossible it was for them to find. In the end, the school is making copies of a workbook she has which is somewhere in a hastily and therefore haphazardly packed container.

Next part of the nightmare: it is a shame on our nation to have to say, but the police did their part. To help? No. To add to the chaos and difficulty of these families. For one, they would not let others come in to help, not even if it was a family member sometimes. For another thing, they certainly had that list of names of who needed to be thrown out of their homes, and if they hadn’t had enough time to pack up, too bad. The police would be there to ‘watch over’ the things the families were forced to leave behind. Yes, they watched — and they broke into the locked up houses to use the bathrooms, and take mattresses and other items for their own use. They also took things left in storage under the houses, like carefully saved Sukkah decorations and also the livelihood of a carpenter, thousands of shekels’ worth of wood — to burn for their own comfort. Did they have the right to this? You tell me.

On top of that, when the families petitioned to get back in for their remaining things, some were told that they weren’t on the list! Oh, they were there when it came to who needed to be kicked out, but not when these people demanded their rights to go back and get what they were forced to leave there — if it was even left after the ‘guardians’ did such an excellent job of watching it.

On top of that, the restrictions placed on the residents who were farmers caused more pain and stress not only to the families, but to just as innocent animals. One shepherd, Nachum Schwartz, was denied access to his animals, who had to stay out in the cold and rain, and two newborn lambs died because of this. Also, farmers who wanted to tend to their plants were not allowed; instead, the vegetation was destroyed. This planting, by the way, was not only government sanctioned but even approved in the form of stipends given to the farmers for some experimental agriculture. Why destroy for the sake of destroying? This also goes for the houses which were caravans; instead of moving them to a new location, which supposedly was the goal of this aktion, they were destroyed. Simple, wanton destruction for the sake of “showing them.” This includes the police purposely pushing over a Kisei Eliyahu, a chair which my friend Michal used for the bris of her son which her family donated. The chair is now damaged, but back in the possession of her family, so they can fix it up and use it again when the next shul is built for this strong community.

So now, there are a few caravans ready for some of the families, but the whole impossible living situation could have been prevented with a little thought and foresight, rather than the rush to destroy. How many caravans are available? A whole 13 caravans for 40 families, as of our visit (which took place after the families were rushed out of their homes). 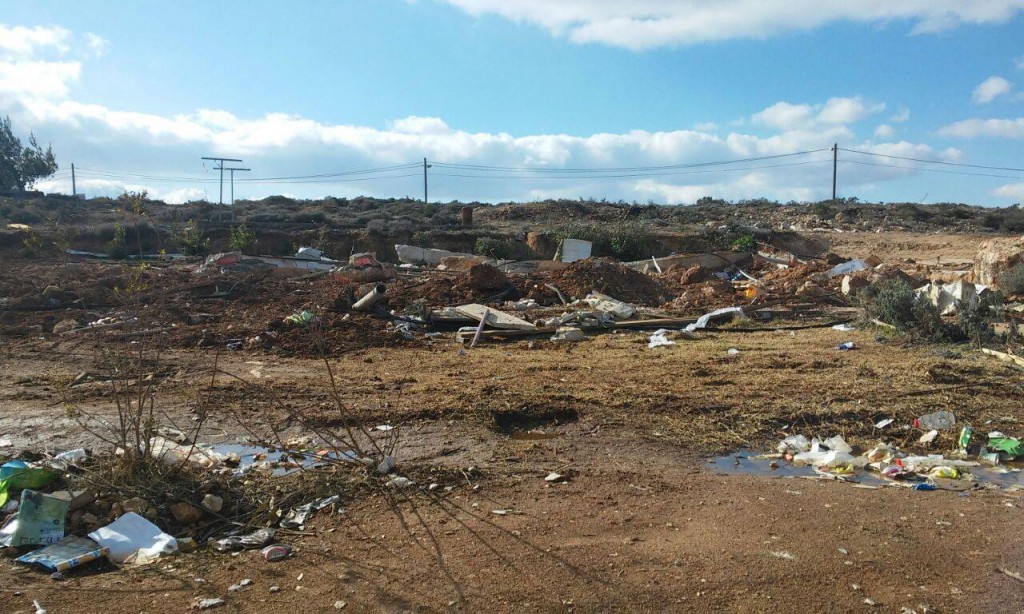 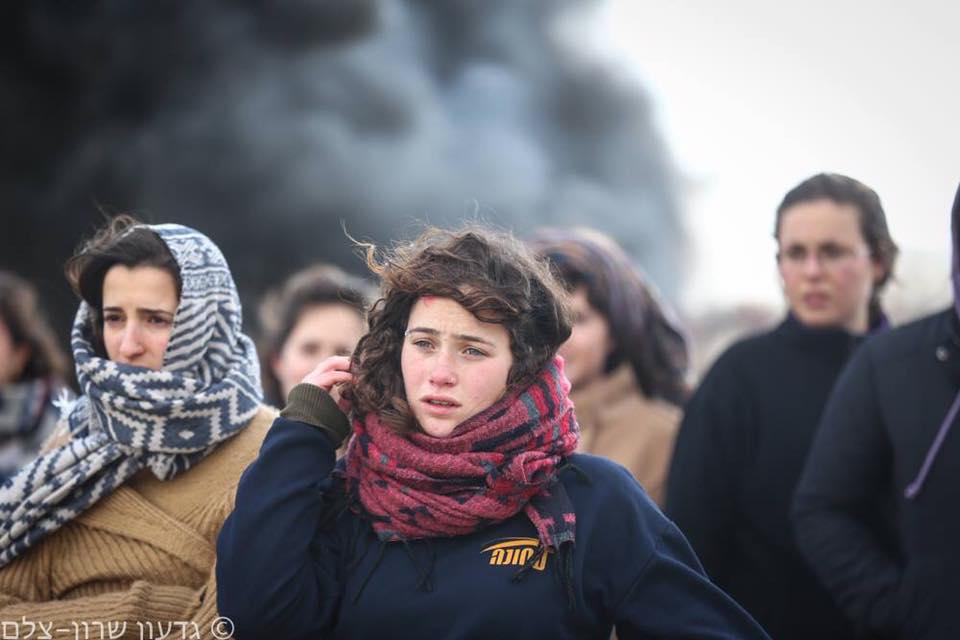 Two weeks have passed, and where are the families now? They have set up tents by the Knesset,  hoping to force the government to follow through on their promise of resettlement. They have been there since last week, even when it was freezing cold and raining, even with their young children, because all they have to look forward to is more weeks of living in a youth hostel, not being able to have normal family lives. 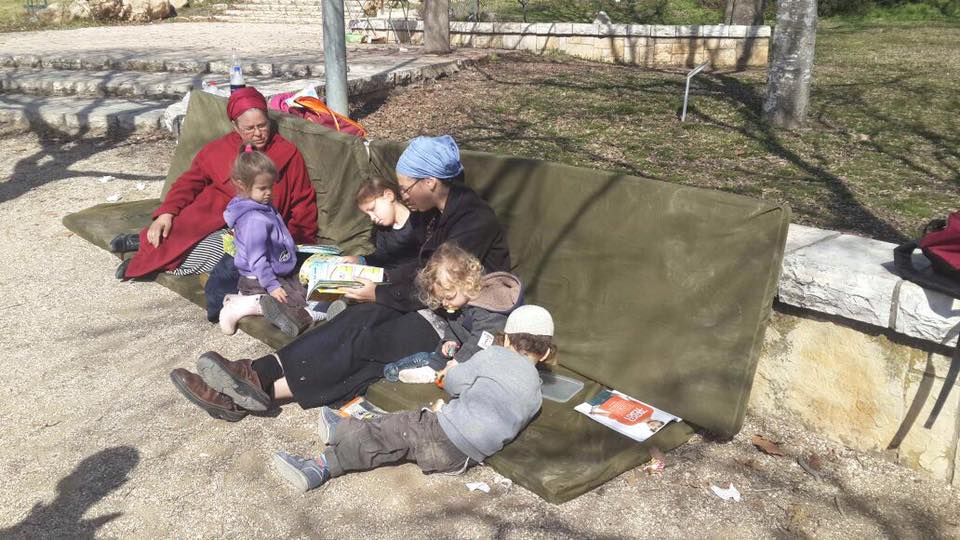 Now the community of Ofra, neighbors to Amona, who have graciously taken them in and taken care of them using their own resources, are faced with their own partial destruction. Based on similar trumped up charges, they were told that part of the land they were allowed to build on is NOW being claimed. These people, having seen what will happen, are already packing; they don’t want to be forced out of their houses and lose their possessions on the whim of a government who suddenly says that the date chosen wasn’t soon enough. But they are not going so quietly; a few owners of this beautiful row of houses scheduled for destruction have put painful reminders to those who come; you are doing this to your own people. Here is your flag, and this is what you are causing. 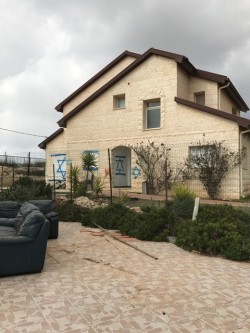 Our flag on the houses slated for destruction shortly. Photo by Lisa Melamed 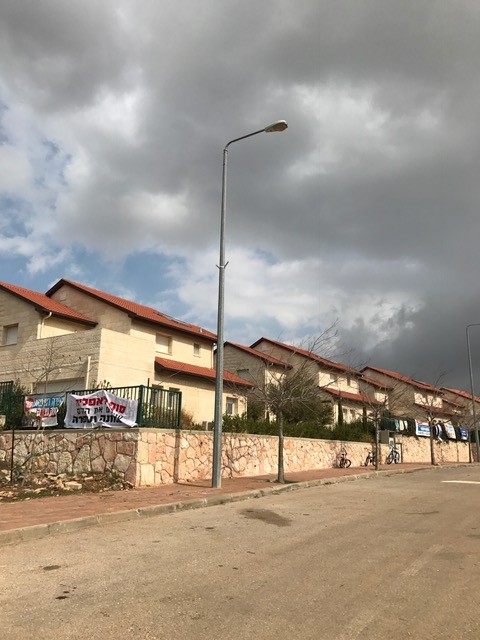 The row of houses in Ofra slated for destruction. Photo by Lisa Melamed

To those on the side who believe this will bring peace, and who keep marching forward (yes, Gush Etzion is next), do not for a minute think this will stop before your own front door. Gaza yesterday, Shomron today, Gush tomorrow, but don’t think it won’t be Jerusalem next, and Tel Aviv after that.

I still hope, adayin yesh li tikva, that our own people will wake up before it is too late, but the chill in the air says that soon we may all be in tents. Hashem yishmor.

Further reading: another community on the brink:   http://www.israelnationalnews.com/News/News.aspx/225061

About the Author
Mori Sokal is a FOURTEEN year veteran of Aliyah, mother of three wonderful children (with her wonderful husband) and is an English teacher in both elementary and high school in the Gush Etzion-Jerusalem area. She has a Masters’ degree in teaching, is a copyeditor, and has published articles in Building Blocks, the Jewish Press magazine.
Comments