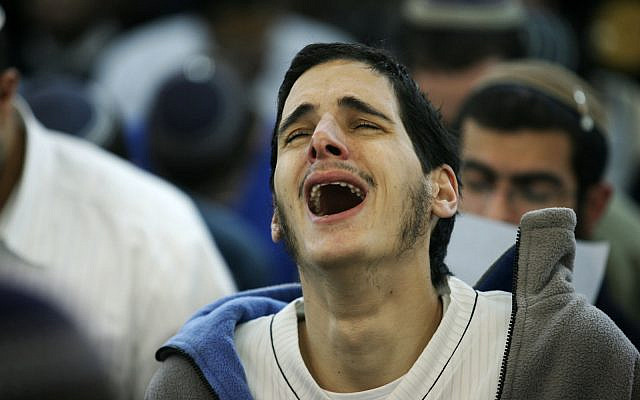 Just before the shots rang out they were learning. Aiming to finish masekhet Megillah in time for Purim, my son and his friend skipped the Mercaz Harav Rosh Chodesh party preparations to sit in the library. Their Talmud, open to the seventh folio, witnessed it all.

Bavli Megillah 7: Esther pleaded with the Sages, “Let my name not be forgotten. Inscribe me for the ages.” The drama of danger, death and decree long over, the latter part of the Scroll of Esther tells us the tale of a different struggle. Will Esther’s story be remembered or not? In the hoary, pre-canonical days of the First Exile, the Sages debate whether her tale warrants a place in what will become the Bible. So she pleads…”Inscribe me.” Will her courage be forgotten, or will we recall her valor year by year?

The harmonious cacophony of a yeshiva library — men and boys chanting, arguing, or just chatting while waiting for a class to begin — is as welcoming to those who know it as the tones of a concert orchestra’s final tuning. Folded within the raucous book-filled walls are the sweet sounds of ancient texts being unpeeled, layer by layer, in the search for just a glance at God’s too-hidden face.

The Rabbis debated. Wouldn’t celebrating the Jew’s victory be a thumb in the eye of the Gentiles? But Esther counters; it is already recorded in their history books. Ah…. The Rabbis open to Proverbs: “Indeed I wrote for you threefold,” three and not four.

The first shots, outside in the courtyard, wounded 18-year old Yonadav Hirschfeld. The sharp retort of the Kalashnikov assault rifle echoed off the Jerusalem stone walls and floor like the snap of a whip in an empty concert hall. But those learning inside stopped only for a moment, thinking that these were firecrackers marking the beginning of that most joyous of months. Kids having a laugh.

“Threefold.” Only three times may we mention our war against Amalek, the Jews’ most bitter of enemies. One: their attack as we left Egypt; two: Moses exhortation to never forget how Amalek set upon the weak stragglers plodding through the desert; three: King Saul’s battle against Agag. Three times can we record the murderous deeds of Amalek, three and no more.

The terrorist turned and fired again. He felled another 18 year old, Roi Roth. Then, Yohanaton Eldad, who had begun to run in flight. Shot in the back at 16, he fell dead on the cold, stone path.

Why did the Rabbis fret so? Esther was a heroine who saved the entire nation. Shouldn’t we commit her tale to our sacred canon? But three times, they answered, no more. For it was not Esther that worried them, but Haman — scion of Agag the Amalekite. Three times had it been ordained that we face him. Three and no more. Amalek — the villain who seeks out the women and children first. Amalek who hates the Jews not for what they do, but that they are. Who cannot abide a world where Jews can breathe free.

It’s not clear when those inside the library realized that what they were hearing wasn’t a game being played, but death being dealt. Someone shouted, “Shots!! Terrorist.” And for an instance — before seats pushed back from reading tables rasped noisily against the floor and readers scattered in every direction — there was a moment of silence. Then the glass door opened and in strode a figure literally armed to the teeth — assault rifle, pistols, ammo clips — ready for a war. Strode in and fired upon the young Ethiopian man who hadn’t managed to close the holy book in which he was engrossed. Doron Mahareta died where he sat.

Did those learned Elders dare acknowledge what Esther begged them to hear? Hers too was no ordinary struggle—but part of something whose roots lay generations earlier. The tentacles of pure hatred had not withered away with dispersion from the Holy Land. Did the bloody handprints of Amalek stain her tale as well?

There was no place to run, barely a place to hide. My son and his study partner, Segev Avichail, his friend since the fifth-grade, huddled between the stacks. The tomes a wall on their right and their left. The Arab terrorist now slowed and took his time. He began to make his way methodically through the library. Row upon row of books organized by name and number. And here and there, crouched down, helpless on the floor, were the young boys who just moments before had been set upon absorbing their wisdom.

The Sages had hoped that the needless, senseless hatred was over with the sacking of the Temple and the exile of the Jews. The horror of an enemy whose blood lust knows no bounds, whose only goal is more death and more mayhem for the Jewish people was supposed to have been left behind. And yet here was Esther’s plea….

Four more teenagers held their breath. Perhaps they whispered a prayer. Avraham David Moses and Segev—both 16. Neria Cohen, 15. Yochai Lipshitz, 18. From stack to stack trod their murderer. They heard his footsteps echo throughout the now silent hall. Who heard the screams of their friends—the ones who were shot before them at point blank range—and who was granted the smallest of mercies of being taken first?

They argued back and forth. “Until they found a verse in the Torah….” Yes, Esther your struggle was not yours alone. But part of something that belongs to the Children of Israel. Part of a clash between good and evil that we thought, that we wished, that we prayed was behind us. You reminded us that we can never forget.

The blood was ankle deep in places. Bullet holes pockmarked the hard terrazzo tile beneath the bodies. Books were shot through and soaked red. They were buried on the morrow along with eight young men whose only crime was to want to learn from them.

“Remember what Amalek did to you….” The seeker of the unarmed, the young, the tired, the weak. Whose only desire is to blot out the very name of Israel.

Memorial Day for Israel’s fallen: from the bravest of soldiers to the meekest of infants. From the battles of Lebanon to the shops of our towns. Those who died fighting, those in their beds. The old and the young. If just for one day — remember them all.