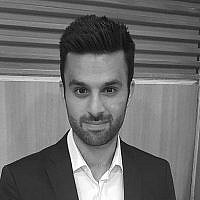 The Blogs
Yoseph Haddad
Apply for a Blog
Advertisement
Please note that the posts on The Blogs are contributed by third parties. The opinions, facts and any media content in them are presented solely by the authors, and neither The Times of Israel nor its partners assume any responsibility for them. Please contact us in case of abuse. In case of abuse,
Report this post.

When I was a high school student, a small part of our history curriculum was dedicated to the Holocaust. Holocaust studies was approached superficially, as part of the outcome of the Second World War. We did however, learn about the “nakbah” quite a lot.

A few years later, as a new draftee into the Israel Defense Forces, we visited Yad Vashem, Israel’s national Holocaust museum, and it was only then that I truly began to comprehend the breadth of the atrocities committed against the Jewish people between 1939-1945. An entire world was opened before me, what had been a far away historical and emotional event became concrete and very close.

Although I am not Jewish, serving in the IDF became significantly more meaningful and important to me since that visit to Yad Vashem.

Since that time, every year it bothered me that on the national Holocaust Memorial Day in Arab Israeli society, there is apathy and disconnect in relation to the day and the shoah and life goes on as usual. It is just unfathomable that 20% of Israel’s population don’t know about the Shoah, an unprecedented historic event, tragic and critical, and it’s connection to the founding of the State of Israel. It is not just a national interest for Arab Israelis to study the Holocaust in depth but it should also be an all Arab interest.

The Holocaust of the Jewish people ultimately affects all humankind. It is the responsibility and obligation of all mankind to act against racism and hatred of the Other.

When the Arab Israeli educational system belittles the significance of the Holocaust in its educational materials it sins against the very fabric of our society it is an ethical and moral offense against society.

In these times, when few Holocaust survivors remain with us, waves of new anti-semitism have increased around the world, and Hitler’s “Mein Kampf”, being printed once again in droves and the voice of Holocaust deniers heard louder and louder. There is great importance of including Holocaust education into Israeli “hasbara” and this begins internally.

We must put an end to the denial of the Holocaust studies within Arab Israeli society.

The path to closing the gap between the segments of Israeli society, between Jewish Israelis and Arab Israelis, and part of the solution to Arab-Jewish disputes is long and complicated, but we need to work to get to that point, to bring closer a day when Holocaust Memorial Day in Israel, is to commemorate it, all of us together with the entire world, together we will stop and unite in the memory of the six million who were murdered in the Holocaust from a moral obligation to remember  these people, from a true understanding of the significance of the Holocaust so that we remember and never ever forget.