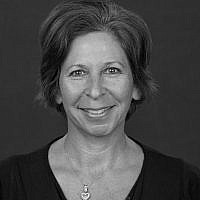 The Blogs
Danielle Burenstein
Apply for a Blog
Please note that the posts on The Blogs are contributed by third parties. The opinions, facts and any media content in them are presented solely by the authors, and neither The Times of Israel nor its partners assume any responsibility for them. Please contact us in case of abuse. In case of abuse,
Report this post.

Since 1981, women’s rights activists have been observing November 25 as a day against gender-based violence. The date was selected to honor the Mirabal sisters. Political activists from the Dominican Republic, three of the four sisters were brutally murdered in 1960. Their names were Patria Mercedes Mirabal Reyes; Maria Argentina Minerva Mirabal Reyes; and Antonia Maria Teresa Mirabal Reyes. Know their names. The ruler of their country, Rafael Trujillo, ordered the killings.

In 1993 the United Nations General Assembly adopted the “Declaration on the Elimination of Violence Against Women.” Its intent was to pave the way toward eradicating violence against women and girls around the world.

In 2000, the General Assembly officially designated November 25 as the “International Day for the Elimination of Violence Against Women.” Since then, governments, organizations, and non-governmental organizations have worked to raise awareness of these issues.

Yet, here we are, 60 years since the death of Patria, Maria, and Antonia, still fighting against gender-based violence.

This decades-long timeline, plus startling statistics – in Israel, 40% of women aged 16-48 have suffered partner violence; and according to the UN, 243 million women worldwide, ages 15-49, have been subjected to sexual and/or physical violence – is a stark reminder that the work is far from done. COVID-19 has also brought this issue out from the dark corners of society, with violence against women rising significantly everywhere since the outbreak of the pandemic.

At Beit Ruth for Young Women and Girls At-Risk, in Israel, we come face-to-face with these disturbing realities daily – the faces and the heartbreaking stories behind the numbers.

As one of the first youth villages in Israel to address violence through a gender lens, Beit Ruth works according to two simultaneous and equally important efforts. First, we provide direct programs and services to girls at-risk, ages 13-18 who have been removed from their homes by court order due to physical, emotional, and sexual abuse. Our girls complete their high school education at our onsite school; receive specialized therapy from experts trained in complex post-trauma; develop self-esteem and life skills through art, music, and animal-assisted therapy, and other evidence-based programs; and, through the nurturing and family-like care of our all-female staff, 24 hours a day, 365 days a year, they begin to trust again – other people and themselves. Trust leads to hope and hope leads to the fulfillment of dreams they never believed they would accomplish, but they do, when given the chance.

Secondly, is Beit Ruth’s Advocacy & Outreach Initiative, led by Ronit Lev-Ari, an authority on gender-based violence who has held many leadership roles during her 40-year career, including serving as the Israeli Government’s foremost authority on women’s issues under two Prime Ministers. This is how we leverage change – by taking our expertise from the Village and going beyond the Village to effect greater social change throughout Israel and, increasingly, the world.

Through advocacy and outreach, we work to drive awareness about the estimated 30,000 girls at-risk of violence/abuse/neglect in Israel; build public support that will add to the discourse about gender-based violence, including the government’s fiscal responsibility to address this crisis; and to advocate for non-discriminatory government policies that support, rather than are biased against, girls and young women. Beit Ruth uses our decades-long expertise in treating at-risk girls in conjunction with Israel’s social change movement to shape the national conversation toward ending the crisis of abuse and violence against girls.

Under the auspices of this Initiative, Beit Ruth worked in partnership with Israel’s Ministry of Foreign Affairs, MASHAV – Israel’s Agency for International Development Cooperation, and the Golda Meir MASHAV Carmel International Training Center in Haifa, to present “Girls & Women At Risk of Violence: The Global Challenge and Israel’s Experience,” a special webinar convened on November 18 to commemorate the International Day for the Elimination of Violence Against Women.

More than 450 leaders from Kenya, Rwanda, Taiwan, Myanmar, Switzerland, Brazil, India, Nepal, Guam, Haiti, Israel, and the U.S., and elsewhere — learned about the prevalence of violence against girls and young women and why this is an ongoing crisis around the world.

This panel event brought together experts in proven on-the-ground programs and services for girls at-risk, and leading trainers who address the issue on the international stage, particularly in countries in transition. Joining Ms. Lev-Ari on the panel were luminaries, including Israeli Ambassador Eynat Shlein, the head of MASHAV; Hava Karrie, the Director of The Golda Meir MASHAV Carmel  International Training Center; Iris Twerski, Managing Director of Beit Ruth; and alumnae from both Beit Ruth and MASHAV’s training program who shared how their lives were transformed.

We know that real social change happens when we work with and through other organizations and change-makers to create more impact than we could ever achieve alone. It is through partnerships, such as the one described here, that we add value to each other’s work and missions, and help to strengthen social change efforts in Israel and around the world related to breaking the cycle of violence for young women and girls. We know that if we don’t address the needs of young women and girls at-risk now, the likelihood of them experiencing violence as women is more likely. That is why Beit Ruth aims to shape policy and needed resources, transform other non-profits, mobilize citizens, influencers and policy-makers, and change the world around us.

About the Author
Danielle is Executive Director of Beit Ruth and directs strategic planning and development to help lead Beit Ruth to a higher level of community-building, visibility, partnership development and impact. Before joining Beit Ruth, Danielle was the Executive Director of Agahozo-Shalom Youth Village in Rwanda for vulnerable and orphaned youth – modeled after the youth villages built in Israel after the Holocaust.
Related Topics
Related Posts
Comments