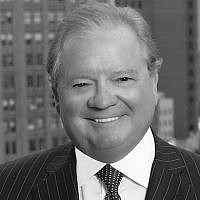 The Blogs
Nicholas W. Allard
Apply for a Blog
Please note that the posts on The Blogs are contributed by third parties. The opinions, facts and any media content in them are presented solely by the authors, and neither The Times of Israel nor its partners assume any responsibility for them. Please contact us in case of abuse. In case of abuse,
Report this post.

The wave of hatred and anti-Semitic acts sweeping America and abroad is shameful, disturbing and almost unfathomable. It is shocking to witness the stubborn resurgence of deviant behavior so soundly overcome by the victory of the Allies in World War II over the perpetrators of the Holocaust, by the rise of the State of Israel, and by the enduring fundamental internationally shared value that people should be free to worship as they wish; a core value explicitly recognized in our Constitution, advanced by President Roosevelt in his Four Freedoms Speech and adopted by the United Nations in its Declaration of Human Rights. And yet anti-Semitism is on the rise. I write because it is wrong to silently tolerate intolerance.

My wife’s then 12-year-old Grandpa David Lieberman traveled from Poland across Europe alone, determined to come to America. He arrived in Baltimore and worked hard as a tailor. Once during the depression, as family lore has it, David closed his shop, walked to the mansion of his largest customer and told her he did not want her business. The reason, he said, was that his wealthy customer made his young son Ephraim deliver mending at the back door.

All three of his children, including my father-in-law Ephraim, bless his memory, earned graduate engineering degrees from Johns Hopkins University before they were 22; one generation removed from a Polish shtetl. Grandpa Dave and America taught the Lieberman family that they were good enough for the front door. During World War II, all of David’s large family in Poland were murdered by Nazis. One of David’s sons fought in the Pacific as a marine officer, and Ephraim served as a navigator in bombers for the Army Air Corps. The love affair and success of America and immigrant people, indeed of so many immigrant families of all faiths and backgrounds, has been intertwined and a mutual blessing. It is time to stand up, speak up, and work hard to assure that it ever be so. Keep America great, together.

The eruption of anti-Semitism from the dormant but sadly persistently present mutant seeds of ignorant, self-loathing degenerates is not an accident. You cannot use the words “America First” in the most important speech an elected official is privileged to give in America without signaling that you are in tune with the Nazi sympathizers of the 1930s. You cannot accidentally disparage people with the label “enemy of the people” without knowing it was a favorite term of Hitler, Goebbels, and Stalin, used to mock Jews. You cannot fail to hear that an observant Jewish reporter is asking a friendly softball question and then shout him down on national television without signaling to haters that it is okay to mock and punish someone solely on the basis of their religious identity. You cannot say, “I am the least racist” and “I am the least anti-Semitic person,” as a non sequitur response to a question about what should be done to halt disgraceful acts performed against Jews, without reminding people of the time-worn bigot’s lame defense that “some of my best friends are Jewish.” And it is wrong to stand by and avoid numerous opportunities to make a clear and definitive public statement, such as the ones Vice President Pence and Governor Cuomo of New York to their credit have made, condemning bigotry and embracing religious tolerance, inclusiveness, and diversity. In contrast, recent almost grudging lukewarm statements from the White House of support for Jews are hardly enough to stem the rising hateful tide of anti-Semitism.

While the historic struggles of the Jewish people are unique, Jews are not alone. My point is driven home painfully by reports that a Muslim Gold Star father Khizr Khan, who has been a US citizen for 30 years, has been denied the ability to travel freely to Canada for bogus reasons. Recall that Mr. Khan had the audacity to criticize candidate Trump at the Democratic convention while holding up a copy of the US Constitution that his son made the ultimate sacrifice to defend. Coincidence? I think not.

Jews had been deeply involved in the Civil Rights efforts of blacks in America in the 1950s and 1960s, and, for example, they and others in our melting pot of a law school in Brooklyn have been supportive and working hard to protect those of different faiths and cultural and national heritage, including our Muslim and Latino populations who are deeply concerned by the direction of the new administration’s policies. It is time for all of us to do the right thing and defend all the descendants of Abraham. Love thy neighbor as thyself.

About the Author
Nicholas W. Allard, is President and Joseph Crea Dean, and Professor of Law at Brooklyn Law School.
Comments