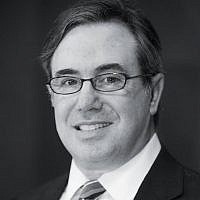 The Blogs
Steven A. Schoenfeld
Apply for a Blog
Advertisement
Please note that the posts on The Blogs are contributed by third parties. The opinions, facts and any media content in them are presented solely by the authors, and neither The Times of Israel nor its partners assume any responsibility for them. Please contact us in case of abuse. In case of abuse,
Report this post.

Israel holds a special place in the hearts of many Jews and non-Jews alike, and the support by those outside the country has been instrumental in developing the country. For decades, even before the establishment of the State of Israel, Jews worldwide invested in the noble project of rebuilding the Holy Land, whether through land purchases, planting trees, or buying Israel Bonds. Many organizations and individuals have continued to give generously for a myriad of great causes. Those of us who care about the future of the Jewish state hope this philanthropy will continue, and even continue to grow.

However, in addition to the major geopolitical challenges that Israel has constantly faced since its birth, a new and nefarious threat has recently emerged, one that threatens to undermine the Israeli economic miracle that has earned the country the moniker of “The Start-Up Nation.” The Boycott, Divestment and Sanctions (BDS) movement seeks to delegitimize Israel and attack it economically. It is time for the pro-Israel community to develop new and multifaceted approaches to face this challenge.

Although the BDS movement is ostensibly wide-ranging—including cultural and academic boycotts—on a practical basis it has focused on boycotting Israeli products, persuading non-Israeli companies to stop doing business in Israel, and divesting from Israeli securities and other investments. Given that the focus of the BDS movement is centered on the disruption of the private sector of the Israeli economy, doesn’t it make sense that efforts to thwart BDS should also be focused on buttressing that very same private sector? Investment in Israel is the antidote to BDS, and should become a key component of the pro-Israel community’s actions to combat these new forces arrayed against Israel on the battlefield of international commerce.

Many of Israel’s friends abroad still engage with Israel only from the ‘tzedakah’ (charitable) side of their financial activities. However, Israel also presents substantial investment opportunities that fit into the other side of individuals’ and communal endowments’ portfolios, alongside Domestic and Global Stocks, Real Estate, Fixed Income, and an array of alternative investments.

At the same time that private, profit-seeking investors are recognizing the opportunities in Israel, the trend of “Impact Investing” is surging in North America. Impact Investing, wherein investors seek to align their wealth with causes and values that they believe in. Impact investing allows one’s investments to achieve a “double bottom line” return. There are many strands of impact investing, such as environmentally-oriented, socially responsible, governance-focused and faith-based.  From just a few billion dollars in the early 1990s, the field of sustainable, responsible, and impact investing assets are now over $6 trillion by one measure.

Jewish and pro-Israel investors have been relatively slow to align their investments with their support for Israel, other than the traditional area of investing in Israel Bonds. Since the early 1950s, Americans have purchased billions of dollars of Israel Bonds, which are attractive as a solid investment, with a flawless record of repayment. Israel Bonds are ‘good for your portfolio and good for Israel’, and can also be an initial entry point for investing in other Israeli asset classes, notably equities.

Israel is a vibrant, thriving economy, home to dozens of leading companies in a wide-range of industries. Despite its lack of natural resources, over the past six decades Israel has built a dynamic economy that has been a paragon of stability, developing technological innovations with global impact. Israel has gone from strength-to-strength as the “Start-Up Nation,” boasting more venture capital per-capita, and the most companies listed on the Nasdaq after the US and China.

Yet the stocks of Israeli companies—including Israel’s public technology stocks—are quite under-owned by investors. At BlueStar our natural response to BDS is to encourage an “invest, don’t divest” approach, emphasizing that one should invest in Israel not just to support the Jewish State, but because it is a solid investment that historically has outperformed most other international equity investments over the past three, five, and ten years. Shockingly, the Jewish community has untapped buying power of more than $70 billion of communal investment assets to deploy, plus perhaps $100 billion or more of individual assets—yet almost none of it is invested in Israeli stocks.

Most individual and institutional investors in the pro-Israel community have made allocations to a broad range of asset classes and geographies. In fact, many investors have equity investments in 40 or more Developed Markets, Emerging Markets and even “Frontier Market” countries. Furthermore, if you look under the hood of some of these portfolios, it is at best disappointing that most Jewish communal endowments have more money invested in countries unfriendly to Israel than in Israel itself. In general, these investors have total equity allocations to countries like Turkey, Malaysia, Indonesia and Qatar that are more than three times larger than their Israel stock allocation, and this figure is six times larger if one includes South Africa. Most of these unfriendly countries also have very risky economies, which further underscores the imperative to look at asset country allocations through a pro-Israel fiduciary lens.

We have the power to make a difference. There is a great opportunity now for those who care about and support Israel with their charitable donations and community involvement to add another, equally-powerful track to their pro-Israel activity via their investment portfolio.

Israeli securities have been an excellent long-term investment and they are also an excellent diversifier for portfolios. Adding a meaningful allocation of approximately 3-5% to both Israeli stocks—tracking the BlueStar Israel Global Index—and Israel Bonds to a traditionally diversified portfolio of US and International equities and US and international bonds delivered an improved return and slightly lower risk over the past ten years. Investors can surely do well while doing good by adding Israeli stocks and Israel Bonds to their portfolios.

Endowments have a fiduciary responsibility to assess their allocations from both a risk and return perspective. Are Jewish communal organizations, which have more money invested in Israel’s enemies than in Israel itself, serving their communities objectives, especially if they are potentially hurting their portfolios and therefore not acting as fiduciaries? Several communities have led the way, notably Miami, Chicago, Oakland, Rhode Island, San Antonio and Richmond. But many more need to join these pioneers.

Now is the time to merge the motivations and long tradition of Israel-focused Tzedakah with the cutting-edge trend of Impact Investing to realize the Triple Bottom Line benefits of portfolio investment in Israel: Investing in Israel is good for your portfolio in terms of returns and diversification; It is good for Israel’s capital market development and economic growth; and it is good for realigning the relationship between the Diaspora and Israel to a framework which is more appropriate for the second decade of the 21st Century.

As Israel approaches its 70th year, facing a new type of economic threat to its success, it is time for the pro-Israel community to deploy our full arsenal. The good news is that the answer is already in our portfolios; we need only shift our allocations to Israel.

About the Author
Steven Schoenfeld is Founder and Chief Investment Officer of BlueStar Indexes, a NY-based research firm which maintains the "BIGI" and "TA-BIGITech" benchmarks for Israeli equities, tracked by the NYSE-listed ISRA Israel ETF and the Nasdaq-listed ITEQ Israel Tech ETF. He is a 32-year veteran of the investment management industry, a pioneer of emerging market indexing, and author of key books and articles on derivatives, indexing and ETFs.
Related Topics
Related Posts
Comments