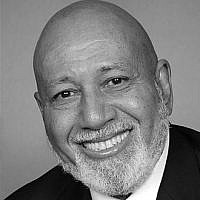 The Blogs
Alcee L. Hastings
Apply for a Blog
Advertisement
Please note that the posts on The Blogs are contributed by third parties. The opinions, facts and any media content in them are presented solely by the authors, and neither The Times of Israel nor its partners assume any responsibility for them. Please contact us in case of abuse. In case of abuse,
Report this post.

When the House of Representatives reconvenes in September, one of our first priorities will be to address the Joint Comprehensive Plan of Action (JCPOA) to curb Iran’s nuclear program.

After careful review, I have decided that I cannot support this deal.

The goal of the recently concluded negotiations was to prevent Iran from obtaining a nuclear weapon. The negotiators worked diligently, but in the end, the JCPOA allows Iran to remain a nuclear threshold state while simultaneously reaping the benefits of relief from international sanctions.

Let’s be clear: Iran is a nuclear threshold state and it didn’t become one overnight. It happened over decades, as Iran continuously asserted that its nuclear program was for civilian purposes. Violating five UN resolutions, Iran has reduced its breakout capacity to a matter of weeks. This is not the behavior of a trustworthy partner in peace.

Just last month, the UN Security Council endorsed the JCPOA. Among other things, the Security Council’s resolution lifts the ban on conventional arms sales to Iran after five years, and gives Iran the authority to restart its nuclear-capable ballistic missile development program within eight years. This poses a threat to the US and to our allies.

These provisions, coupled with a mere delay of Iran’s nuclear program, will give other regional powers a clear window of opportunity to strengthen or create their own weapons programs. As conventional weapons shipments to Iran resume, its neighbors will feel obligated to bolster their own security.

Billions of dollars will be injected into the Iranian economy as sanctions are lifted. Some portion of this money is likely to be directed toward state-sponsored terrorist groups, such as the Iranian Revolutionary Guard, Hezbollah, the Houthi, and Hamas.

We must maintain a strong sanctions regime – to do otherwise is to give up our leverage. Sanctions are what brought Iran to the table, and already, companies from around the world are lining up to invest in Iran. Should sanctions need to be re-imposed, it is not clear if investment contracts implemented in the meantime would be voided. Indeed, many nations may no longer feel bound to US sanctions once UN and EU-based sanctions are eased.

The provisions of the agreement that allow sanctions to “snap back” are of particular concern. This process could take well over two months and is limited to “significant” violations of the deal (the JCPOA fails to define what qualifies as significant.) Iran could undermine the agreement in ways that would be nearly impossible to stop.

Alarmingly, the agreement imposes a process that can take up to twenty-four days before inspectors gain access to any undeclared nuclear sites discovered in the future. This delay could provide Iran with substantial opportunity to hide any missile or nuclear activity.

My vote against this deal is not a vote for war, nor is it a vote to do nothing. I believe the US should continue to lead the way with our allies on sanctions until a truly comprehensive deal is reached. Just because we got a deal doesn’t mean it’s the right deal, and until we have a deal that permanently disassembles Iran’s nuclear program, we should not enter into an agreement that undermines our negotiating power in the future.

This involves keeping last-resort military options on the table. That is why I will introduce legislation that authorizes the President or his successors to use military force to prevent Iran from becoming a nuclear weapons state. Congress should pass this resolution immediately, and then do everything in its power to ensure the President never need use it.

The way we do that is by negotiating the right deal that cuts off Iran’s path to nuclear weapons – forever.

About the Author
Congressman Alcee L. Hastings represents Florida’s 20th district, and serves as a Senior Member of the House Rules Committee, Ranking Democratic Member of the U.S. Helsinki Commission, and Co-Chairman of the Florida delegation.
Comments