Iranian Major General Qassem Soleimani, the leader of the Islamic Republic’s Quds Force, is in Baghdad to push for the formation of a new Iraqi government favorable to Iran’s interests.

Reuters reported on Wednesday that Soleimani had arrived in Iraq on Saturday, the day of the parliamentary election. The unexpectedly poor results of Haider al-Abadi, Iraq’s prime minister, has dealt a blow to US interests in the country, leaving Iraq vulnerable to Iranian interference.

The two major winners of the election – the bloc of cleric Muqtada al-Sadr and the Fatih (“Conquest”) coalition led by Badr Corps head Hadi al-Ameri – want to see the U.S. expelled from Iraq immediately. Asa’ib Ahl al-Haq, an Iranian-backed militia responsible for the murder of U.S. servicemen in Iraq, also scored well in the elections.

The pro-Iranian bloc is only four seats away from forming a pro-Iran coalition without Sadr, a cleric who won on a populist ticket with a strong anti-American rhetoric and problematic relationship with Iran.

In an attempt to counter Sadr’s influence, General Qassem Soleimani is working to form an anti-U.S., pro-Iran coalition among the Shiite parties. Iran is unlikely to relinquish influence in Iraq, its most important ally in the Middle East.

To influence the outcome of the election, Soleimani will either try to form a marriage of convenience with Sadr’s organization or marginalize Sadr. The cleric has accepted Iranian patronage in the past. Before the election, Iran publicly stated that it would not allow Sadr’s bloc to govern.

Iran has maintained a significant interest in Iraq for many years, acting as a safe haven for dissidents from Saddam Hussain’s regime and, following the 2003 intervention, taking up a role as both a major political actor and providing support to Shiite militias who targeted coalition forces and the country’s Sunni population.

This activity has been stepped up considerably since the capture of Mosul by the terrorist organization ISIS in 2014. The then ongoing nuclear negotiations acted to deter any significant U.S. attempt to mitigate Iranian influence. In fact, it appears that the talks may have resulted in just the opposite: in September 2014, it was reported that Iran had offered to work with the U.S. in defeating ISIS in exchange for more flexibility on the number of centrifuges it could retain as part of a deal.

Although it is not possible to quantify in its entirety the impact of the proposal on U.S. behavior, it was ultimately this preferred Iranian option – that they were allowed to retain all of their centrifuges, but with only some in an operation state – which was a cornerstone of the final JCPOA.

Iran currently exerts significant political and economic powers in Iraq. Tehran’s influence is being felt at the highest level by regular visits from General Qassem Soleimani, commander of Iran’s Quds Force – a man described as “the single most powerful operative in the Middle East today” and “Iran’s viceroy for Iraq.”

Former Iraqi Prime Minister Nouri al Maliki was only forced out of power once Tehran withdrew their support of his premiership. But despite this fall from grace, al Maliki – the man most directly responsible for ISIS’ rise – remains Iran’s point man in the country, and continues to plot his own return to the top.

On the ground, Iranian efforts have centered on training and supplying a variety of Shiite militias under the wider umbrella of the “Popular Mobilization Forces” (PMU), a diverse 60,000 to 140,000 strong group formed in 2014 to counter the rise of ISIS and compensate for the repeated failures of the Iraqi Army. 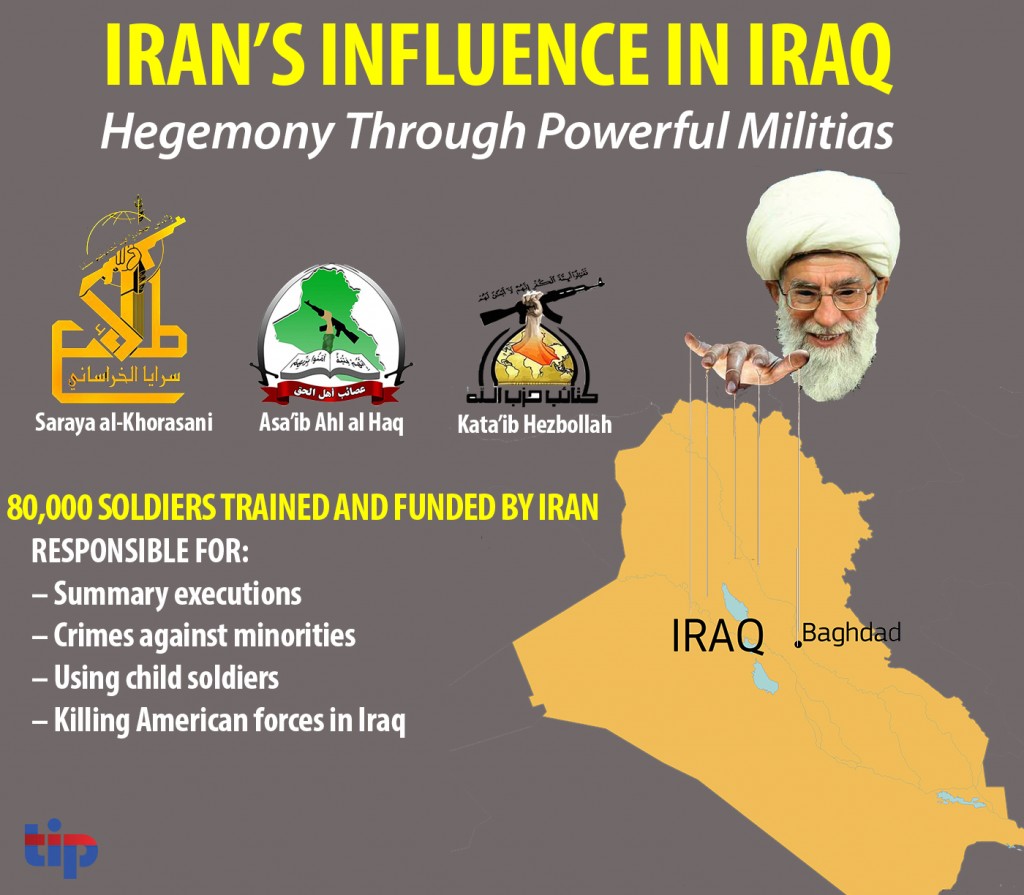 The group’s aggressive behavior has raised concerns over their potential future role in Iraqi society, especially since a number of the militias pledged spiritual allegiance to Iranian Supreme Leader Ali Khamenei, including the Badr Organization and Saraya al-Khorasani. The official logo of the al-Khorsani group is an exact replica of that of Iran’s Revolutionary Guard Corps (IRGC).

During the Iraqi insurgency of Abu Musab al Zarqawi’s al-Qaeda in Iraq, Hezbollah’s Iraqi branch Kata’ib Hezbollah sprang to prominence in 2007 and was involved in a series of lethal attacks against coalition forces. In the conflict in Iraq against ISIS, Kata’ib Hezbollah joined the alliance of PMU. They have also been party to a litany of human rights abuses and war crimes documented by Human Rights Watch, and yet continue to attract Iranian funding.

Reports from June 2017 claim that dozens of bodies were found in Mosul handcuffed, executed, and buried in shallow, unmarked graves. In May 2017, two aid workers found a group of 15 bodies on the side of the road between Athba and Hammam al-Alil, just outside Mosul. Armed forces reported that they saw Iraqi “security forces”, mostly likely PMU, bring the men to the site and execute them. The U.S. Department of State noted that, under the guise of fighting ISIS, Kata’ib Hezbollah is advancing Iran’s interests in Iraq, further adding: “Iranian-supported Shia militias in Iraq have committed serious human rights abuses against primarily Sunni civilians.”

Asa’ib Ahl al Haq (AAH) is another Shia paramilitary organization operating largely in Iraq in allegiance with the PMU. It was founded by Qais al-Khazali, after his split from Muqtada al-Sadr’s Mahdi Army. Khazali was recruited in 2006 by the IRGC and AAH fighters have since received extensive training either in Iran or at Hezbollah camps in Lebanon. It has been reported that “since its inception, AAH has relied heavily on Iranian funding, training, and logistical support, and in return has acted as an Iranian proxy in Iraq, carrying out its agenda and promoting its interests.” Iraqi intelligence officials estimated that as of March 2014, AAH received $1.5-2m per month from Iran, adding that: “They see themselves as the “Soldiers of the Marjaeen” [the ultimate Shia religious authority]…their power is unchecked.”

AAH forces have also been implicated in human rights abuses including raiding Sunni homes and mosques and murdering Sunni civilians. In 2014, Human Rights Watch reported that AAH had executed at least 109 Sunni men in the villages surrounding Baghdad between March and April of that year. Two years later, Human Rights Watch described AAH attacks on Sunni civilians in Iraq as “serious violations of international humanitarian law” and “deadly abuse.”

“The United States has a crucial role to play in countering Iraq’s malign ambitions in Iraq by maintaining a military presence in the country,” Joshua S. Block, President and CEO of The Israel Project, said. “To keep Tehran in check, the United States must exert pressure on Baghdad to prevent the PMU from receiving the $1 billion allocated to the group from the Iraqi national budget. They could also put checks in place to prohibit Iranian-backed forces from profiting from the billions of dollars pledged to Iraq by the international community for the reconstruction of the country.”

Block warned: “These resources strengthen Iran’s proxies on the battlefield and help them to manipulate Iraq’s political system, social fabric, and ideological nature. With every inch of territory these groups acquire, Tehran’s influence in Iraq becomes stronger.”

As an example, he cited the assault on the former Kurdish-held town of Kirkuk in October 2017 and U.S. failure to come to the aid of Kurdish forces – the most reliable anti-Iran force in Iraq. As a result, Iranian proxies now control the oil-rich city and strategically vital towns nearby.

Iran’s growing influence in Iraq has also caused concern in the United States. In March of this year, Reuters reported that U.S. Defense Secretary James Mattis accused Iran of “mucking around” in Iraq’s election process. Mattis told reporters that the U.S. had what he called “worrisome evidence” that Iran is funneling “not an insignificant amount of money” into Iraq to interfere in Iraq’s democratic election process.

Iran’s Supreme Leader, Ayatollah Ali Khamenei, has previously warned the Iraqi government not to allow U.S. troops to remain in Iraq, after the defeat of ISIS.

In February, Qais al-Khazali, the founder and leader of AAH, vowed that Shiite groups will form Iraq’s next government and their priority will be to “expel the American forces from Iraq and terminate the strategic cooperation agreement between the two countries.” The same month, Kata’ib Hezbollah warned that its fighters will begin to attack American troops “at any moment,” if they build a permanent military presence in Iraq.

Strategically, Iran seeks to secure Iraq as part of its “corridor to the Mediterranean” – allowing them a direct route through to Syria, Lebanon and – ultimately – all the way to the Israeli border. Already, Tehran controls large elements of Iraq’s economy and political system. Blessed with both the financial windfall and political legitimacy the JCPOA has generated, Iran is well-placed to secure its goals.