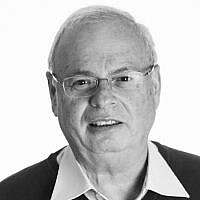 The Blogs
Shimon Shapira
Apply for a Blog
Advertisement
Please note that the posts on The Blogs are contributed by third parties. The opinions, facts and any media content in them are presented solely by the authors, and neither The Times of Israel nor its partners assume any responsibility for them. Please contact us in case of abuse. In case of abuse,
Report this post. 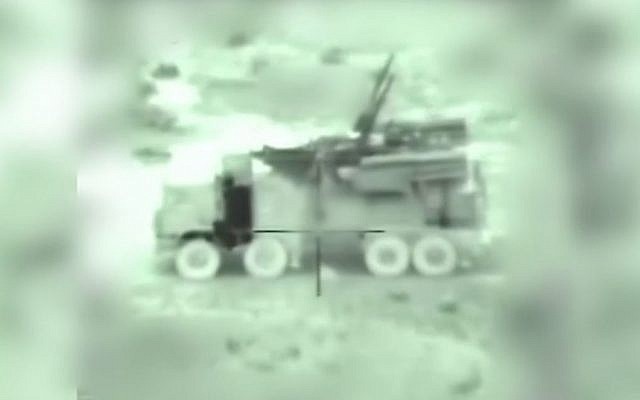 A Syrian mobile anti-aircraft battery vehicle as seen through the targeting camera of an incoming Israeli missile, in footage released by the IDF of its early morning strikes in Syria on January 21, 2019. (IDF)

In response to Israel’s attack Sunday on Iranian targets in the Damascus region, the Quds Force of the Revolutionary Guard fired a medium-range surface-to-surface missile at the Hermon Mountain vicinity. Apparently, the attack had been planned for a long time and approved by the Iranian regime in Tehran. The missile was intercepted by Israel’s Iron Dome system.

This is not the first time that Iran has reacted to an Israeli aerial attack on Iranian targets in Syria. On May 10, 2018, the Quds Force fired more than 30 Grad and Fajr rockets toward Israel. Most of them fell inside Syrian territory, and some of them were intercepted by Israel without causing any casualties. However, this time, the Quds Force fired a more accurate surface-to-surface missile toward the Hermon region, rather than at the outskirts of the Golan Heights. Moreover, this missile attack occurred during daylight hours. The significance of firing the missile during the day was that it was clear to the Quds Force that there were hundreds of Israeli tourists visiting the area and a ski resort.

This attack indicated Iran’s readiness to ratchet up the level of violence and take greater risks for a strong Israeli reaction, thereby leading to a military deterioration with Israel. If reports that some of the targets attacked by Israel were close to the Quds Force command building in the Damascus region are true, from the viewpoint of Iran, it can no longer tolerate Israeli attacks. This is certainly the case after the end of Israel’s ambiguous policy of claiming the military actions and its readiness to take direct responsibility for attacks on Iranian targets in Syria.

Therefore, it would seem that at this stage, we are facing a new strategic situation with regard to Israel’s dealing with Iran in Syria. At its foundation lies the risk that Iran, through the Quds Force, will intensify its reactions to Israeli attacks on Syria and is even prepared to enter into a limited conflict with Israel.

It was no coincidence that the Iranian press released this statement by Iran’s Air Force commander Brigadier General Aziz Nasirzadeh: “The young people in the air force are fully ready and impatient to confront the Zionist regime and eliminate it from the Earth.”

About the Author
Brig.-Gen. (ret.) Dr. Shimon Shapira is a senior research associate at the Jerusalem Center for Public Affairs. He served as Military Secretary to the Prime Minister and as Israel Foreign Ministry chief of staff. He edited the Jerusalem Center eBook Iran: From Regional Challenge to Global Threat.
Related Topics
Related Posts
Comments