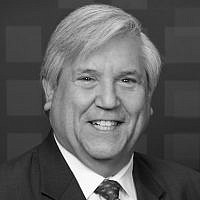 The Blogs
Greg Rosenbaum
Apply for a Blog
Advertisement
Please note that the posts on The Blogs are contributed by third parties. The opinions, facts and any media content in them are presented solely by the authors, and neither The Times of Israel nor its partners assume any responsibility for them. Please contact us in case of abuse. In case of abuse,
Report this post.

Ultimately, there are only two ways to ensure that Iran does not become armed with a nuclear weapon: diplomacy or military action. Neither course of action offers an ironclad guarantee.

Make no mistake — neither Iran nor its leaders are our allies. That we are negotiating, or currently share a common enemy in ISIL, does not make us friends — far from it. A nuclear-armed Iran would be a direct threat to the national security interests of the United States and would be an existential threat to Israel. However, the question before us is how to create a scenario with the lowest long-term probability of Iran acquiring a nuclear weapon? To this question there are no perfect answers.

It is simple to think of answers in immediate terms, but reality plays out in second and third order effects. A military strike against Iran might possibly wipe out all of Iran’s nuclear facilities, but this would not be guaranteed, and the Iranian government will most likely respond by retaliating against Israel and other US interests. Even after a strike, Iran could rebuild a nuclear weapons program and would likely gain more popular support at home for these actions.

By contrast, a diplomatic accord, in which Iran choses to relinquish its pursuit of nuclear weapons, is a better option. Now is not the time to endanger negotiations with unnecessary saber rattling or an immediate increase in economic sanctions.

Consider the accomplishments of the P5+1 efforts thus far: Iran has halted progress on its nuclear program and has rolled it back for the first time in a decade; a year ago, Iran had about 200 kilograms of 20 percent enriched uranium — today, it has none; a year ago, Iran was making steady progress on the Arak reactor — today, progress on Arak is frozen in place. Furthermore, inspectors now have unprecedented daily access to Iran’s enrichment facilities and a far deeper understanding of Iran’s program.

President Obama and his administration have constantly and consistently reiterated that we will ensure that Iran does not acquire a nuclear weapon. We must give our president and our negotiators the opportunity to succeed. Secretary of State John Kerry, a proven friend to Israel throughout his long history of public service, has reiterated the administration’s view that no deal is better than a bad deal. It is in this context that he said the talks to date have made “real and substantial progress” and that both sides believe a good deal can be achieved with more time at the negotiating table.

We must not ignore the progress of the past year and walk away now or precipitate our partners walking away. We must not give Iran justification to negotiate away the real progress already made nor to walk away from the table altogether. For the moment, the status quo is better than no deal or a bad deal. While we agree that an acceptable accord is an uphill climb, it is still possible. So, we must try. For if we do achieve what many claimed, as little as a year ago, was the near impossible, the world, including the United States and Israel, will be in a much safer place.

Because success is still possible, and because Iran’s nuclear ambitions have been stalled and subject to constant inspection, we must have faith in this process and allow these negotiations to continue another seven months. We owe it to all of those who may otherwise pay the ultimate price for preventing a nuclear-armed Iran to ensure that there could have been no other way.

About the Author
Greg Rosenbaum is chair of the National Jewish Democratic Council.
Comments