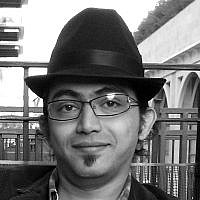 The Blogs
Ashkan Safaei Hakimi
Apply for a Blog
Please note that the posts on The Blogs are contributed by third parties. The opinions, facts and any media content in them are presented solely by the authors, and neither The Times of Israel nor its partners assume any responsibility for them. Please contact us in case of abuse. In case of abuse,
Report this post.

In light of the new developments in the region, an unprecedented opportunity has been provided for Israel to reach a lasting peace with Palestinians and the Arab world; An opportunity that if taken, can put an end to 70 years of hostilities between Israel and most of its neighbors.

In face of the new threats, Arab leaders are currently much readier than they have ever been to sit and negotiate with Israel towards peace. It was this Thursday that in a very rare gesture, a high-ranking Saudi official shook hands with an Israeli senior diplomat in public. The two officials, Dore Gold and Anwar Eshki also described the Islamic Republic of Iran as “the main threat to the regional stability” and supported Israeli – Saudi peace. In addition to that, Gen. Eshki gave an interview to the Israeli Channel 10 TV station in which he emphasized on the possibility for the two countries to work together, providing Israel accepts the Arab peace initiative, at least in principle.

Moreover, Bloomberg News reports that officials from the two countries have held secret meetings in the last 17 months to discuss “the Islamic Republic’s threat.”

It is not only the leaders in the Arab world who are ready for making peace with Israel. General population is also ready. 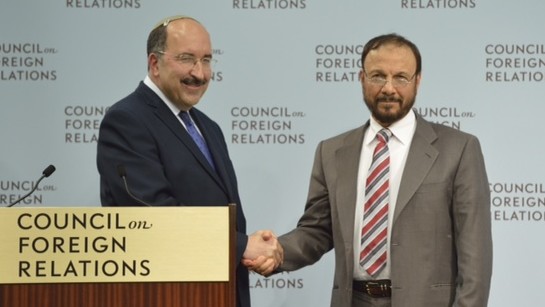 As a new opinion poll by IDC Herzelia reveals, Israel is not the primary concern of Saudi public. It is not even the second one. In fact, Saudis are much more concerned about the Islamic Republic of Iran’s expansionist policies and the rise of the Islamic State in Iraq and Syria.

According to the poll, 53 percent of Saudis put Iran as their main arch-foe, while 22 percent thought that the Islamic State is more dangerous and only 18 percent named Israel as their main enemy.

Another surprising finding of this poll was the fact that the majority of Saudi public supports peace and normalization with Jewish state. Based on the results of this poll, 85 percent of Saudis support the Saudi-led Arab peace initiative. So if Arabs are so inclined to peace, what prevents us from that “final deal”?

The current Israeli and PA governments are the biggest obstacles to peace.

We, Israelis, are currently witnessing one of the least prepared cabinets for peace we have ever had in the last few decades. And Benjamin Netanyahu himself although not a warmonger, is not a fan of a permanent peace agreement that gives “Palestine” full sovereignty over the West bank (Judea and Samaria) either.

Let me be clear. BiBi wants to keep the status quo as long as possible, so he will not have to take a tough decision which he might regret in the future.

On the other side of the “negotiation table,” we have the PA and its president Mahmud Abbas. The Palestinian Authority has lost its legitimacy among ordinary Palestinians a long time ago. It has faced accusations of corruption and gross misconduct in the last few years. These accusations have been made, not only by political rivals, but also by the European Union.

Furthermore, Mahmud Abbas is now serving his 11th year of his four-year term. As a result of that, the current Palestinian government has neither the power nor the legitimacy to sign any peace treaty with Israel.

In addition to what I have just mentioned, it needs to be noted that president Barak Obama is not a peace maker either. The Mid-East is currently in a serious, unprecedented crisis; and among other causes, President Obama’s policy of non-intervention is to be blame for this.

To sum up, there is an old saying which goes “the enemy of my enemy is my friend.” This proverb is not applicable to the Mid-East in most cases. But this time, it seems that having a common concern, has made a great opportunity for Israel and the Arab world; and we will definitely regret it if we do not take that opportunity.

About the Author
Ashkan was born and raised in Iran. He moved to Israel a few years ago, Worked as a journalist at the National radio of Israel and is now working as a freelancer.
Comments