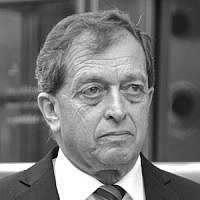 The Blogs
Arieh Dan Spitzen
Apply for a Blog
Please note that the posts on The Blogs are contributed by third parties. The opinions, facts and any media content in them are presented solely by the authors, and neither The Times of Israel nor its partners assume any responsibility for them. Please contact us in case of abuse. In case of abuse,
Report this post.

There has been much talk in recent days about the possible effects of the latest US concession to Iran in the nuclear negotiations. Much of it centers on Iran’s demand for the immediate lifting of all economic sanctions. Only two weeks ago, the Wall Street Journal reported that “the Obama administration estimates Iran has between $100 billion and $140 billion of its oil revenue frozen in offshore accounts as a result of sanctions. US officials said they expect Tehran to gain access to these funds in phases as part of a final deal. Iran could receive somewhere between $30 billion and $50 billion upon signing the agreement, said congressional officials briefed by the administration.”

This has led critics to worry that Iran will gain immediate access to enormous sums of money that it can use to bolster Hezbollah and strengthen Hamas in Gaza. In fact, very recently, the British newspaper The Telegraph reported that Iran has given Hamas millions of dollars to reconstruct the tunnels in the Gaza Strip that were destroyed by the IDF in last summer’s fighting. But even without the enormous new flow of funds promised by the removal of US and international sanctions, Iran has not limited its financial contributions in the Palestinian arena to Hamas or to Gaza.

Instead, the evidence suggests that it has been funneling money to the Palestinian Authority through its Shari’a courts and buying influence with the Palestinian public in the West Bank as well. One of the key channels of Iranian influence is the Al-Ansar Charitable Society, based in Gaza, which was designated an “unlawful association” by the State of Israel on 24 October 2003. The society has been transferring Iranian funds to the families of Palestinian “martyrs” (including many terrorists) on behalf of the Iranian funded, Martyrs Foundation in Lebanon. The Martyrs Foundation was listed as Specially Designated Global Terrorist by the US Department of the Treasury eight years ago and declared by Israel to be an unlawful association a year earlier.

Despite all of these government designations the Al-Ansar Charitable Society continues to transfer Iranian funds to the families of terrorists, through Palestinian Authority institutions. Thus for example: According to its website, on July 23, 2012, the Al-Ansar Charitable Society distributed $1,650,000 from the Iranian Martyrs Foundation to families of “martyrs” killed in the West Bank during the Al-Aqsa Intifada. Notably, in this instance, Iranian financial support was facilitated by the Palestinian Authority’s postal services, where families of “martyrs” were instructed to go in order to collect their benefits.

In an earlier website posting, the Society claimed it delivered funds to the children of those killed in the Al-Aqsa Intifada under an agreement between the Society and the Institute for Management and Development of Orphan Funds (IMDOF), an organization established in September 2005, directly subordinate to the Palestinian Authority’s Sharia courts.

Standing alone, this Iranian financial support can only be considered a small beachhead in that nation’s efforts to gain influence with the PA and West Bank Palestinians, but it remains unclear whether there are other, less open financial streams flowing from Tehran to Ramallah. More importantly, the willingness of the Palestinian Authority to allow its postal service and government department to be used as a channel for financial support from an Iranian financed and US designated Hezbollah organization raises further questions about both the PA’s internal cohesion and its ultimate sympathies. The only thing that is clear is that Tehran, through its renewed support for Hamas and its coordination with the PA to fund payments to the families of “martyrs” in the West Bank, is seeking a key position of influence in the Palestinian territories. So far, in the West Bank at least, the sums involved have been relatively modest, but as Iran is itself infused with tens of billions of dollars in imminent sanctions relief, there is no telling what the scale of its future role may be.

About the Author
Arieh Dan Spitzen formerly served as the head of the Palestinian Affairs Department in The Coordinator of Government Activities in the Territories Unit (COGAT).
Comments