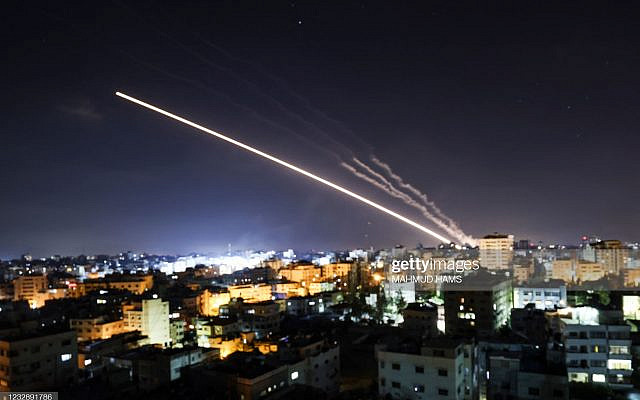 As the international community focuses its attention on efforts to renew negotiations over Iran’s nuclear program, we should not ignore the full extent of Iran’s threats to the security of Israel posed by Iran’s terror proxies. These include rockets, precision-guided missiles, and we can now add drones and Unmanned Aerial Vehicles (U.A.V’s) to the growing conventional threat to Israel.

The wake-up call for the development of Iran’s drone and U.A.V capabilities came on September 14th, 2019 with the attack on the Saudi Aramco oil facility. Although the Houthi rebels in Yemen claimed responsibility for the attack, it was clear to all that this was a sophisticated Iranian attack using drones and cruise missiles.

The title of a 2020 op-ed by Tom Freidman in the New York Times says it all: Dear Joe, It’s not about Iran’s nukes anymore. In his article, Friedman made the point that it’s not just Iran’s nuclear program that President Biden should be concerned about.

In analyzing the attack on the Saudi oil field Friedman wrote, “The Iranian drones and cruise missiles flew so low and with such stealth that neither their takeoff nor their impending attack was detected in time by Saudi or U.S. radar. Israeli military analysts, who were stunned by the capabilities the Iranians displayed, argued that this surprise attack was the Middle East’s “Pearl Harbor.”

Indeed, Israeli military planners know that almost any weapon system that Iran has will ultimately get into the hands of its terror proxy forces: Hamas, Hezbollah, Palestinian Islamic Jihad and Iranian proxy forces in Syria. This is all by design, and it is the foundation of Iran’s strategy for the destruction of Israel.

In 2015, Ehud Yaari, a leading Israeli Middle East analyst, wrote a detailed article titled, How Iran Plans to Destroy Israel. In the article, Yaari identified Iranian proxy forces as the key to their evil intentions.

Yaari wrote that the Iranian proxies surrounding Israel in Gaza, Lebanon and Syria comprise the moqawama (resistance). He wrote, “Such a scenario would provide them with plenty of opportunities to keep their proxies engaged with Israel, paving the road to a long-term war of attrition masterminded by Tehran and backed by its missile arsenal, with or without nuclear warheads.”

The recent round of fighting in May between Israel and Hamas and Palestinian Islamic Jihad (P.I.J.), called Operation Guardian of the Walls, provides important insights into Iran’s strategy.

In an interview with Brig.-Gen. Zvi Haimovitz, former commander of IDF Air Defense, he said that over the past decade, “…the skills of Hamas grew dramatically”. In just ten days of fighting in last May, the terror organizations launched 4,300 rockets at Israeli civilians.

According to Haimovitz, Hamas and P.I.J. were seeking to overwhelm Iron Dome, Israel’s vaunted rocket defense system, by firing massive salvos of rockets. Haimovitz provided some striking numbers to make his point.

During Operation Protective Edge in 2014, the largest salvo of rockets was twenty-seven. By contrast, in this last round of fighting, Hamas and P.I.J. fired sixty-five rockets in one simultaneous salvo at Israel. In fact, he said that in just one hour, they fired two hundred rockets at the city of Ashkelon.

Although Iron Dome performed admirably and was able to stand up to most of these challenges with a 90% success rate, it was not perfect. Twelve Israeli civilians were killed during the operation in addition to significant property damage to Israeli homes.

It’s important to remember that since Israel’s unilateral withdrawal from Gaza in 2005, Hamas and P.I.J. have fired more than 16,500 rockets at Israeli civilians. And in the summer of 2006, Hezbollah fired nearly 4,000 rockets at Israel during the Second Lebanon War.

Operation Guardian of the Walls could be just a microcosm of the challenges that Israel will face in the future. We know that Iran has already supplied Hezbollah in Lebanon with more than 130,000 rockets, and Iran is constantly trying to help Hezbollah upgrade this massive arsenal with precision-guided missiles. Now add the threat of drones and U.A.V.’s. in the hands of Iran’s proxy forces into the already complex threat matrix facing Israel.

According to a detailed report by United Against Nuclear Iran (UANI), “In just over a decade, Hezbollah – with Iranian assistance – built a drone program from scratch and now has military-grade reconnaissance and attack UCAVs, as well as upgraded commercial drones.”

It does not take a leap of the imagination to envision a nightmare scenario where Israel has to defend itself in a war with Iran’s proxies on three fronts: Gaza, Lebanon and Syria. On October 17th, Major General Uri Gordin, head of the IDF Homefront Command said this in an interview about a future war, “…we are looking at between 1,500 and 2,500 rockets fired daily towards Israel.”

Israel could be faced with a situation where Iran’s proxy forces would try to overwhelm Israel’s air defenses by using massive rocket fire combined with drones, U.A.V’s and precision-guided missiles. They would not only target civilians with indiscriminate rocket fire but also launch precision attacks against Israel’s critical infrastructure: electrical power plants, desalination plants, Ben-Gurion Airport and IDF headquarters in Tel Aviv.

Seth Frantzman, author of the new book titled Drone Wars, concluded his book with a stark warning. He wrote, “Countries that experiment with drone strikes, like Iran, will also be able to present stronger enemies with a real threat. This is the threat of being able to attack anywhere against national infrastructure and sensitive sites that don’t have enough defenses.”

If the international community is serious about preventing a very destructive war in the Middle East, it should look at the full array of Iran’s threats to the security of Israel that are both conventional and nuclear.