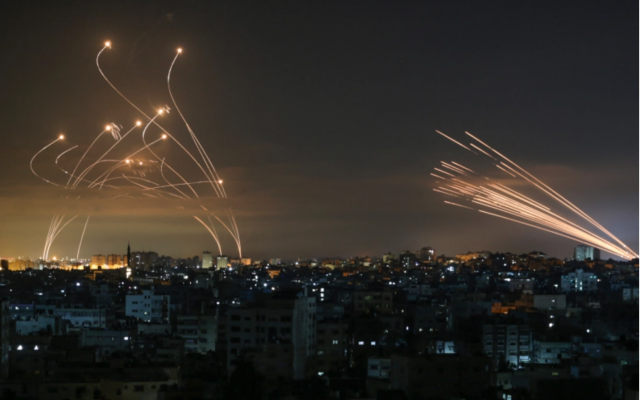 In the ten years since Israel deployed Iron Dome missile defense system it has successfully shot down literally thousands of rockets pointed (not aimed) at Israel’s cities, towns, moshavs and kibbutzim. The lion’s share of rockets originate from Gaza’s Hamas and Palestinian Islamic Jihad who most recently launched over 4,000 rockets within a two-week period this past May.

May 14th I was jerked awake by a shreiking 3am air raid siren outside my Herzliya, Israel home, warning of incoming rockets launched from nearly 100 kilometers away. In conjunction with the siren I was unnerved by the sound of Iron Dome missile launches and the booming explosions of Hamas rockets exploding in mid-flight. I then found myself waiting to see if a rocket might get through the defense exploding on my street or neighborhood as happened in suburban Tel Aviv, killing pedestrians.

Thus the mid-September kerfuffle in the US House of Representatives over a $1 billion request to replenish Israel’s Iron Dome more than held my personal attention. The media coverage painted a picture of a few Progressive House Democrats led by Rep. Rashida Tlaib (D-MI) of Palestinian descent bound and determined to deny Israel the U.S. funding and succeeding in forcing the removal of a special Iron Dome allocation from a critical Continuing Resolution budget bill slated for a vote. Alarm bells were ringing throughout Israel and among Israel’s friends in Congress and the Biden Administration.

A great deal of sound and fury has followed underlined by significant and relevant questions; What did the successful Iron Dome allocation removal portend for the future? Was the U.S. going to abandon its decades-long commitment of friendship and commitment to Israel’s defense? Was the Democratic Party now under new ownership? Was Israel’s new government up to the task or had it fumbled the most important international relationship? Would this event embolden those radical actors who do nothing but wish Israel and Jews harm?

Just as analysts, commentators, columnists and politicians were competing with each other to provide answers US House Majority Leader Steny Hoyer (D-MD) brought a stand-alone Iron Dome funding bill up for a vote and low and behold it was passed 420 – 9! Exactly 210 Republicans joined 210 Democrats in what may turn out to be a standout bipartisan vote that truly united this deeply divided Congress. It’s worth noting that of the 100 members of the House Progressive Caucus only a tiny handful voted against the Iron Dome funding bill, hardly a tidal wave of anti-Israel sentiment.

Although the successful House vote assuaged the most immediate concerns the high profile legislative tactic to place defense aid to Israel into the midst of a critical budget debate should raise alarm bells. While in retrospect this appears to be a botched legislative tactic, an attempt to gain Republican votes, Israel never wants its defense to become a partisan cudgel or political football where one side scores points over the other.

Iron Dome is an outstanding example of the success of the U.S. – Israel relationship when it comes to national security and defense for both countries. Iron Dome technology was developed by an Israeli company Rafael which for years has conducted a joint venture with U.S. defense contractor Raytheon, now manufactured in both Israel and the U.S. and deployed by the US Army as well as Israel. Development began in 2007 and it was President Obama who made the original commitment of U.S. funding for the system. Now Iron Dome funding is through the US Defense Authorization Act.

But the May Gaza rocket attacks and Israeli military response brought attention to the asymmetrical nature of the conflict between Hamas/Palestinian Islamic Jihad and the Israel Defense Forces. Most analysts agree a conflict over a Jerusalem neighborhood to evict longtime Arab residents accompanied by provocative nationalist Israeli political demonstrations in Jerusalem’s Old City, and a West Bank Palestinian political vacuum following the cancelation of Palestinian elections contributed to an emboldened Hamas wishing to fill the vacuum with rocket attacks on Israelis.

The Israeli political environment was also in turmoil after Netanyahu’s Likud was unable to from a majority government following the March elections. A lame duck prime minister struck back at Hamas rocket attacks unleashing the fury of modern weaponry within Gaza neighborhoods which were sites of rocket launches. This all played badly in international media coverage, made worse when Israel destroyed the Gaza building housing international media headquarters. Anyone looking for justification to label Israel an aggressor emboldened by U.S. military aid the Gaza operations provided plenty of amplification.

While I as a relatively new Israeli citizen found myself disturbed by the trauma experience by Gazans I couldn’t help but wonder what if Israel had no Iron Dome? What if the 90% of Hamas rockets intercepted and destroyed mid-flight by Iron Dome had landed and exploded in Israel’s neighborhoods? There would have been hundreds if not thousands of casualties, billions of dollars in damages and even deeper trauma than that experienced by 3am air raid sirens.

We are grateful for U.S. support and that of Israel’s friends in America who made their voices heard by Congress which resulted in the 420 – 9 vote. And we must also understand the perception of those who are represented by the nine ‘no’ votes indicate we must do more to find a solution to the conflict which has roiled Israel and Palestinians for decades.

About the Author
Ken Toltz began his professional career at AIPAC in Washington, D.C. after attending Hebrew University in Jerusalem. He's a 3rd generation Colorado native, businessman and long-time gun violence prevention activist. After 42 years from his first visit to Israel he has relocated his home to Mitzpe Ramon in Israel's Negev.
Comments