“Seven days you shall live in sukkot (thatched huts). Everyone included in Israel shall dwell in such sukkot. This is so that future generations will know that I had the Israelites live in sukkot when I brought them out of the land of Egypt” (Leviticus 23:42-43).

To this day, Jews throughout the world celebrate the week-long holiday of Sukkot by moving out of their comfortable homes into fragile huts built so that stars can be seen through their thatched roofs. By spending a week in sukkot, Jewish families relive the biblical narrative of dwelling in temporary structures during their ancestors’ wandering through the Sinai wilderness.

In the biblical portion Zechariah 14:16–19 read in synagogues on the joyous holiday of Sukkot, the prophet Zechariah extends an invitation to all humanity to join the Jewish people in sukkot. If all the people of the world would live for just one week in fragile huts undefended and exposed to the sky, we would be living at peace with each other and in harmony with nature. 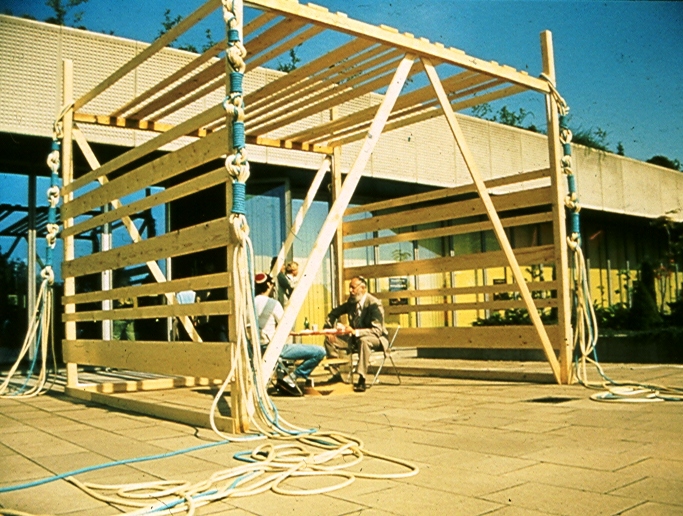 Since spiritual blogging invites us to weave contemporary narratives with biblical narratives, I will tell the story of my building a sukkah (singular for sukkot) in Munich. It was my art installation for the international Sky Art exhibition at the BMW Museum.

At first, I was reluctant to accept an invitation to participate in the exhibition since my wife’s grandparents, aunts, uncles, and cousins were all murdered by the Germans. It was also being held in the city in which Hitler got his start and at a museum across the road from the Olympic Village where 11 Israeli athletes were murdered by Arab terrorists nearly 30 years before 9/11.

However, reading the article on Munich in Encyclopedia Judaica changed my mind. It described how, in the 18th century, the Munich authorities harassed its Jews by making it illegal to build a sukkah. When I looked in my calendar and saw that the opening of the Sky Art exhibition fell during the holiday of Sukkot, I agreed to participate if the City of Munich would fund my building a sukkah at the entrance to the museum. A sukkah is sky art since stars dotting the night sky must be visible through gaps in its roof.

When I arrived at the BMW Museum, I found Bavarian pine planks, the same pine wood used to build the barracks at Dachau death camp built in a garden suburb of Munich. The planks were piled on the sidewalk in front of the museum waiting for me to build the sukkah. BMW had contributed the wood and sent its carpenters to help me erect the hut. Unfortunately, they refused do anything when they learned that I had no blueprints. It made no difference that I had an accurate drawing of my sukkah that I had made for the exhibition catalog. It did not help when I explained that as the designer, I could stand there and direct the construction. “No blueprints! No building!” was their response.

Two other artists participating in the exhibition overheard my hour-long fruitless discussion with the carpenters and offered to help me build the sukkah. As we started to build the sukkah, a Japanese artist passed by and offered to help. Tsutomo Hiroi, Japan’s greatest kite maker who would fly his giant dragons in the Bavarian sky, was the most skilled carpenter of the four of us. He helped us build a strong structure that survived an attack by a neo-Nazi motorcycle gang that attempted to destroy the sukkah after it was built.

As we worked, Hiroi stood inside the sukkah, looked around at it, and chanted, “Ohhh, beautiful Japanese building. Ohhh, beautiful Japanese building.” He saw its resemblance to the delicate geometries of rice-paper covered wooden frameworks found in traditional Japanese dwellings. I unsuccessfully tried to convince him that we were building a Jewish building. When the sukkah was standing, he was willing to accept that we had built an Asian building. Israel is on the west coast of Asia, while Japan is on its east coast.

The next year, I marked the parentheses of Asia by exchanging sand from the beach in Tel Aviv with sand from the beach at the fishing village of Chikura. I photographed a parenthesis mark that I etched in the damp beach sand with a stick near the surf line at the Pacific Ocean. I filled the etched arc with yellow Tel Aviv sand. I flew back to Tel Aviv to etch a matching parenthesis mark in the sand at the Mediterranean shore that I filled with black volcanic sand that I had brought to Israel from Chikura. I made a serigraph from the photographs showing the set of two parentheses with Israel’s sky, surf, and sand facing Japan’s sky, surf and sand.

The Hebrew word for shade, “tzel,” is related to the word for salvation and rescue: “hatzalah.” The protective shade in the desert provided by the sukkah gave the Israelites life-granting refuge from the relentless sun while fleeing from Egyptian bondage. We sat and ate in the sukkah around a table that I constructed from a clear plastic cylinder holding two discs, one as the tabletop and the second floating midway between the top and the ground. On this second disc, I spread earth flown from Israel to hover over the ground casting an ellipsoid shadow on the sukkah floor. My idea for creating a shadow-making table came from my realization that the final two Hebrew letters of “ereTz yisraeL,” Land of Israel, spell the word for shadow: “TzeL.”

Marking the opening of the Sky Art exhibition, an international Sky Art conference was held at which I was invited to deliver the keynote address. In my talk “Higher than Sky,” I told a Hassidic tale in which Hassidim tell about their great rebbe who ascends to heaven during the ten days between the high holidays of Rosh Hashanah and Yom Kippur. A skeptic comes to their town and hears them enthusiastically tell about how their rebbe ascends to heaven in order to plead for the forgiveness for all humanity’s transgressions in a face-to-face encounter with God. The skeptic confronted a group of the Hassidim: “How can you think such ridiculous nonsense? According to tradition, even Moses fell short of such an encounter.” They responded, “If you knew our rebbe, you too would recognize his greatness.”

One morning, the skeptic sees the rebbe seated in the front of the synagogue next to the ark suddenly disappear. He ran out of the synagogue and spied the rebbe rapidly walking down the street. The skeptic discreetly trailed the rebbe and saw him enter his home to emerge a short time later dressed in workman’s clothes with an ax in his belt and a rope draped over his shoulder. The rebbe walked to the edge of his village where the forest began, chopped down a small tree, cut off its branches, tied all the wood together with his rope, and entered a hut with the bundle of wood on his back. Peering through a window, the skeptic saw a frail old woman in bed and the rebbe putting the wood in her stove, peeling potatoes, and putting up a stew to cook, changing her bedding, and getting down on his knees to scrub the floor.

He then spied the rebbe walking back home, replacing his work clothes with an elegant black brocade robe and a white woolen tallit prayer shawl, and returning to the synagogue through a back door. The skeptic quietly slipped into the synagogue to find the Hassidim talking ecstatically about their rebbe’s return from his ascent to heaven. The skeptic added, “If not higher than that!”

This blog post is an excerpt from my new book Photograph God: Creating a Spiritual Blog of Your Life http://photographgod.com available from amazon.com.