Martin Luther King stands as an example of an American hero. Many Americans want their youth to emulate his leadership and hold him up as a national example. History has an array of great leaders who show an optimal path to progress. Civilization chooses the values we appreciate and uplifts those who embody them into our national heroes. 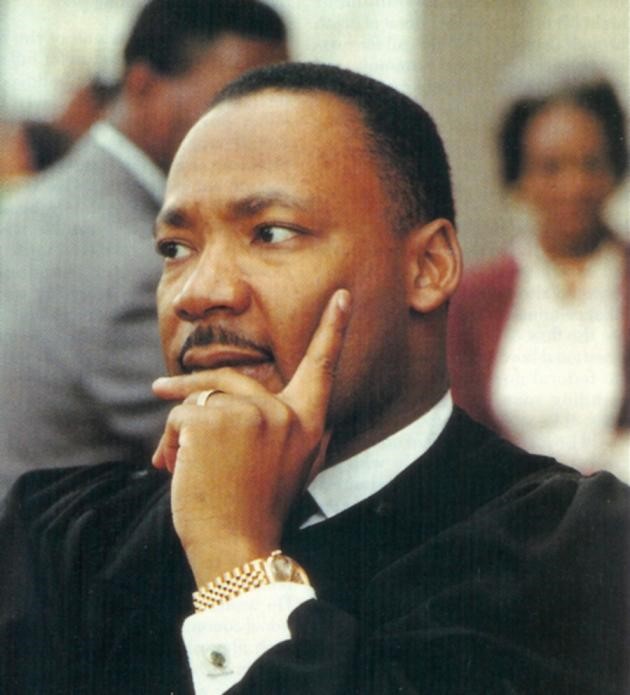 Lithuania has many Holocaust perpetrators they consider their national heroes; one they believe embodies their national values and serves as an example of greatness of is a Lithuanian diplomat and the Prime Minister of the wartime Provisional Government of Lithuania – Kazys Skirpa. He founded the Lithuanian Activist Front, and set the policy for the nation. Lithuania honors him for his service and has named streets in the two largest cities to glorify his memory. 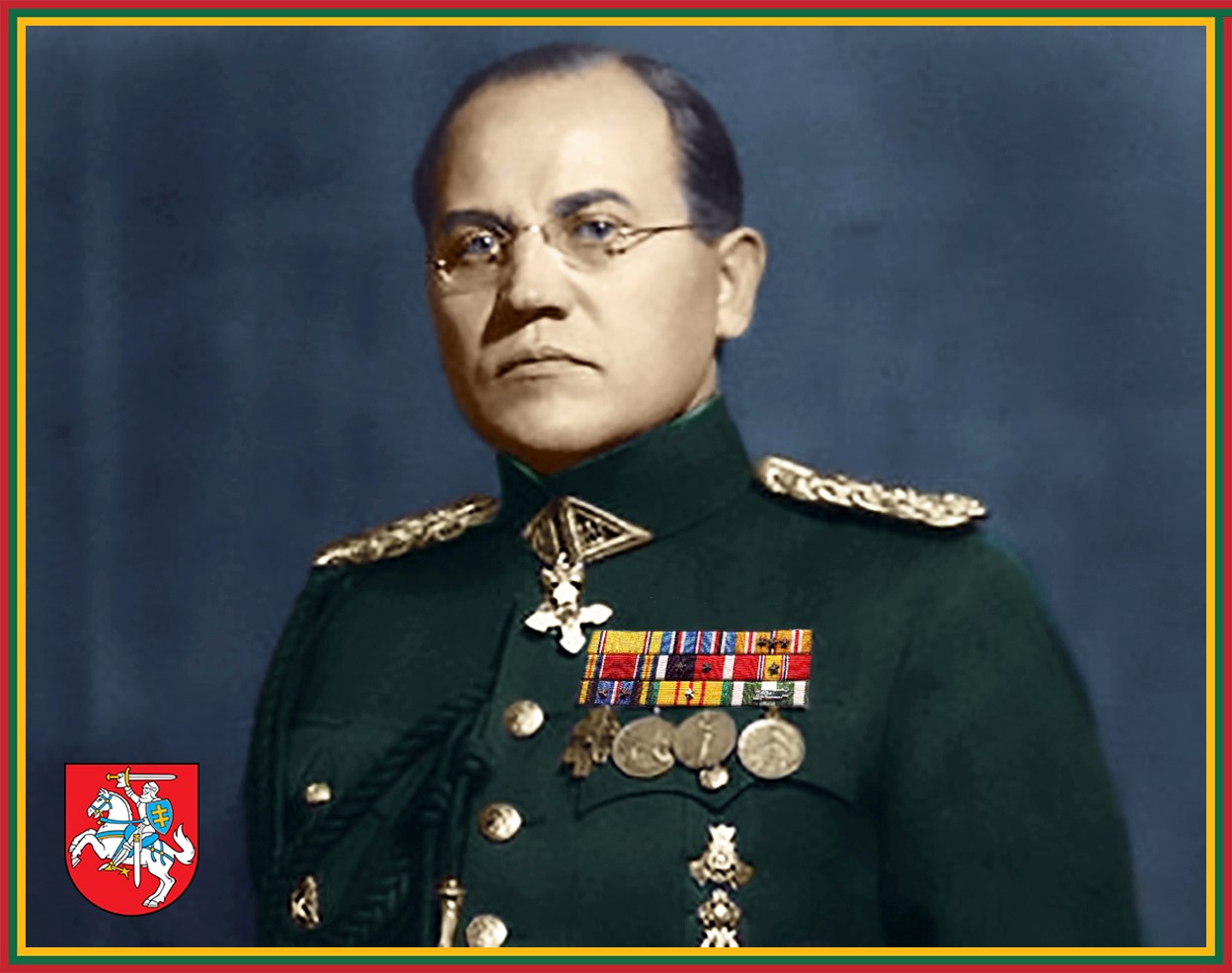 Skirpa created the myth that Jews invited the Soviets to invade Lithuania; that Jews welcomed them, and that Lithuanians should exact revenge on Jews. He suggested that Jewish property be plundered and distributed. Just as Skirpa recommended, Jews were “eliminated”. Lithuanians executed his plans. The Jewish population on Lithuanian soil were slaughtered. Foreign Jews were brought to Lithuania to be murdered. Lithuanians went to other European countries to guard concentration camps and to murder Jews.

In his memoirs Skirpa writes of his own sense of humanity: “Aside from that, a few weeks before the start of the Russian-German war there was released a proclamation directed specifically to the Jews. This was done to warn them in advance that they will have no life in the New Lithuania. In this way it was desired to warn the Jews that it would be best for the sake of saving their own lives to withdraw from Lithuania in advance or at least along with the Russian Red Army.”**

The Lithuanian Government has officially reported that American judicial authorities “completely exonerated” Skirpa of any crimes. This statement is false. Lithuania never expected anyone to fact check their claims, and so they lied with impunity. In fact, the American Federal Bureau of Investigation reports, have Skirpa tied to the German Nazi Joachim Von Ribbentrop who was hanged at Nuremberg for his role in starting WWII and for enabling the Holocaust. These FBI documents also tie Skirpa to the German Alfred Ernst Rosenberg, an influential ideologue of the Nazi Party, who helped to create the racial policies of the Nazi Party. Rosenberg was also hanged after the Nazi trials at Nuremberg. In his capacity as Lithuanian Ambassador to Germany, there can be no doubt that Skirpa discussed his genocidal proposals with Von Ribbentrop and Rosenberg, who formally implemented their proposal to commit a Jewish genocide one and a half years after Skirpa publicly proposed it, and after Lithuania had already completed their Jewish genocide on Lithuanian territory.

The Lithuanian Government wishes us to know definitively that calling for the genocide of Jews and achieving that goal was “not participation in the Holocaust” and that incitement to genocide was not “anti-Semitic actions”. Lithuanians believe apparently, that it is our imagination to recognize it in this manner. 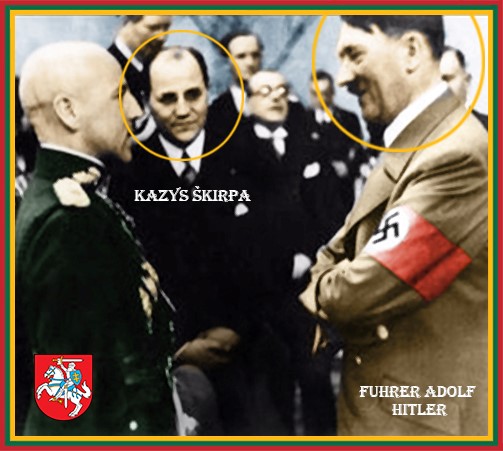 After the war, Skirpa emigrated to the United States and lived into old age. In 1995, his remains were taken back to Lithuania where he was re-buried in a formal state ceremony in their National Cemetery.

Honorable Lithuanians have made an effort to change the street signs honoring Skirpa, however the Mayor of Vilnius, Remigijus Simasius opposed those efforts. The Mayor calls his city “The friendly city” and insists he opposes anti-Semitism. Vilnius has too many monuments that glorify Holocaust perpetrators to accept this claim. 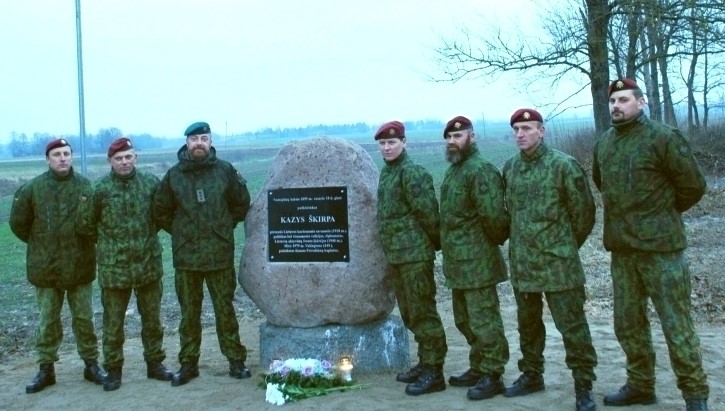 Honors for a monster

Another Holocaust perpetrator revered with a monument in Vilnius is Jonas Noreika. Any time a young Lithuanian walks on Skirpa Street, or gazes at the monument for Noreika, they are implicitly honoring the genocide of their own co-citizens. Such are the values and burden imposed upon Lithuanian youth by their government.

On May 26, 2016, the Lithuanian Government signed onto the definition of antisemitism as endorsed by the session of the International Alliance of Holocaust Remembrance. This definition states: “Antisemitism is a certain perception of Jews, which may be expressed as hatred toward Jews. Rhetorical and physical manifestations of antisemitism are directed toward Jewish or non-Jewish individuals and/or their property, toward Jewish community institutions and religious facilities”. However, the Lithuanian Government wants us to be certain that Skirpa was not an anti-Semite, he was simply “speaking in the language of his time”. Lithuania signing onto this statement illustrates their disingenuous stance. 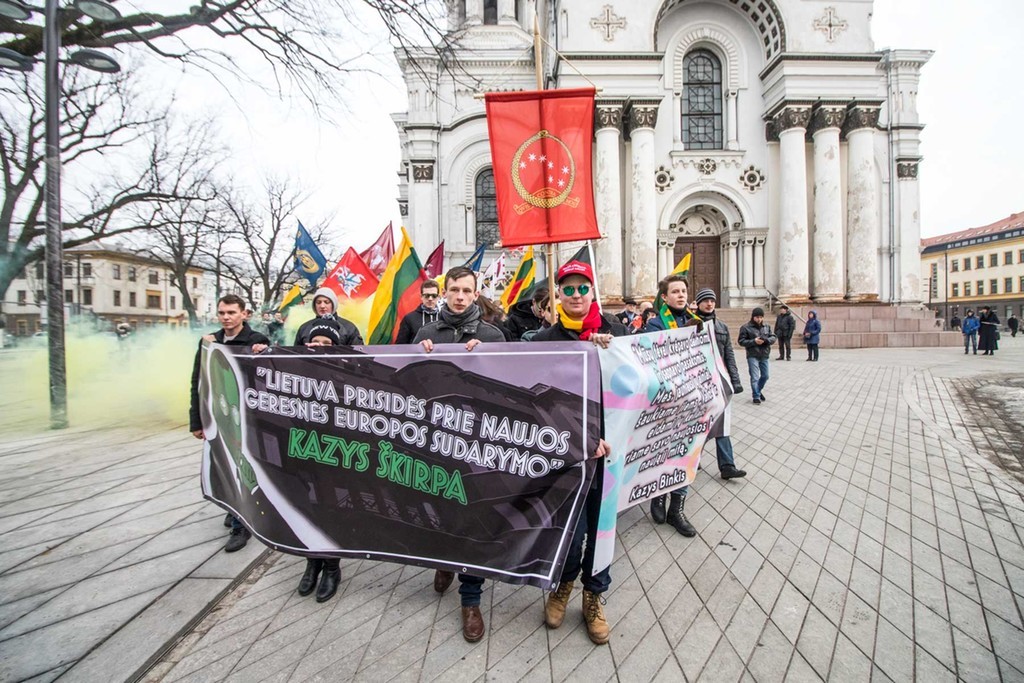 When a national government determines that racist, annihilationist language is only “speaking in the language of his time” therefore not anti-Semitic, it sets a low bar for accepting what constitutes racism. By applying this determination, Americans that called for the enslavement of black Africans were not racist, they were ‘just speaking in the language of their time”. Proponents of slavery and murder were just speaking “severely”.

If we look at the example of Soviets versus Lithuanians and apply the Lithuanian governments’ determination, then there is no evidence that Stalin individually physically harmed a single Lithuanian and no proof that as leader of the Soviet Union, his words caused direct harm to any Lithuanian. Additionally, Stalin suggesting the deportation of Lithuanians to Siberia was not advocating a nationalist crime, but rather just “speaking in the language of the time”. No rational person would find this acceptable, however the Lithuanian government uses this standard for assessing Holocaust crimes perpetrated by Lithuanians.

On January 15, 2019, the Lithuanian Government will argue in court that Jonas Noreika should be deemed not responsible for his Holocaust crimes, and that he should remain a national hero. The Lithuanian government devised the legend that Noreika is a hero, and will now legally defend his good reputation. This will be the first time that a European Government has legally sought to defend a Nazi collaborator. In the same manner that they have twisted truth about Skirpa, the government now seeks Court approval to validate their distortions about Noreika.

Lithuania cannot undo the Holocaust; however, they can start telling the truth and stop honoring perpetrators as their national heroes. The Court case on January 15, 2019, will indicate which path they intend to choose. Genocide is not mythology but characterizing monsters as heroes becomes mythology.