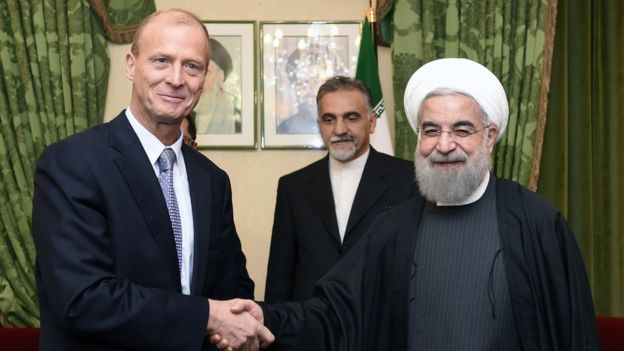 With the lifting of economic sanctions under the terms of the Iran nuclear deal, formally known as the Joint Comprehensive Plan of Action (JCPOA), hundreds of major multinational companies will be returning to Iran. In spite of the smiles of Iranian President Hassan Rouhani and Foreign Minister Mohammad Javad Zarif, the important question is this: Is Iran a country you really want to be doing business with?

Since 2011, Iran has been up to its neck supporting the brutal regime of Bashar al-Assad in Syria. A 2015 memorandum of the Congressional Research Service reported that since the outbreak of the popular uprising turned sectarian bloodbath, the Iranian regime has provided more than six billion dollars a year in financial support to the Assad regime.

In addition, Iran has given massive direct military assistance in the form of an endless supply of ammunition, weapons and thousands of soldiers of its own Revolutionary Guard Corps together with fighters from its loyal proxy, Hezbollah.

As a result, the Syrian Civil War has created more than four million external refugees; almost seven million internally displaced, and cost the lives of more than 250,000 Syrians.

It is important to remember how so many died. The Syrian regime has targeted its own citizens with poison gas, dropped barrel bombs on civilian market places, used starvation as a military tactic, and conducted torture on an industrial scale.

This makes the government of Iran complicit in aiding and abetting the Syrian regime in committing crimes against humanity.

The CEOs and shareholders of the companies returning to Iran should be asking: Is this a country we want to be doing business with?

And that’s not all.

Iran continues to have an abysmal human rights record. It routinely uses torture in its prisons on journalists and human rights activists and has imprisoned over 120 members of the persecuted Baha’i faith simply for their religious beliefs. Then there is the issue of Holocaust Denial.

On January 27, the world commemorated International Holocaust Remembrance Day. On the same day, Iran’s Supreme Leader, Ayatollah Khamenei posted yet another Holocaust denial video on his website. While Iranian leaders continue to deny the Holocaust, the regime actively supports terrorist groups like Hamas and Hezbollah that work to commit another Holocaust.

As we begin the implementation of the JCPOA, the Iranian regime is continuing to support Bashar al-Assad, sponsor terrorism, abuse the human rights of its own citizens and deny the Holocaust.

For all of these reasons, the prohibitions on business with Iran for most U.S. companies will remain in place. Not so for other countries, especially the European Union which claims to prioritize the issue of human rights.

Recently, British Foreign Secretary Phillip Hammond said, “I hope British businesses seize the opportunities available to them through the phased lifting of sanctions on Iran”.

So here’s a question for Mr. Hammond and leaders of other European countries: How can you promote business with Iran on Monday and claim that you support peace and human rights on Tuesday?

Doing business with Iran sends the message that there is an economic reward for defying all norms of international behavior and causing the deaths of hundreds of thousands and the suffering of millions.

Next time your heart breaks after looking at a picture of a dead Syrian refugee child, or you get angry after yet another round of rockets fired from Gaza, just remember that it is the Iranian regime that is at the root cause of so much of this violence.

It will be up to us to tell the companies that are rushing to return to Iran that this brutal regime is not a place you want to do business with.

About the Author
Bob Feferman is Outreach Coordinator for United Against Nuclear Iran (UANI), a not-for-profit, non-partisan, advocacy group that seeks to prevent Iran from fulfilling its ambition to obtain nuclear weapons. UANI’s private sanctions campaigns and state and Federal legislative initiatives focus on ending the economic and financial support of the Iranian regime to compel Iran to abandon its illegal nuclear weapons program, support for terrorism and gross human rights violations.
Comments
Advertisement