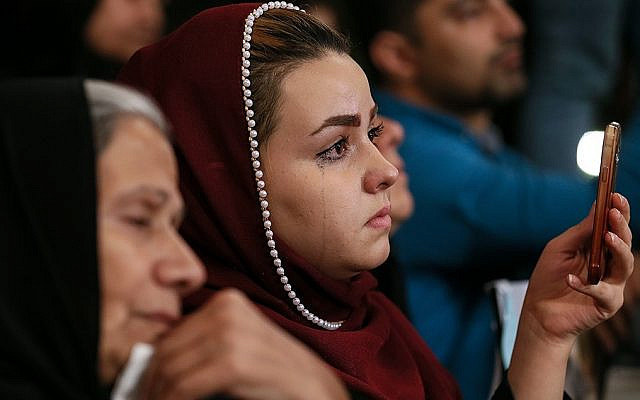 According to rights activists and media reports Iran’s high-ranking officials – among whom, IRGC Ground Force Commander Brigadier General Mohammad Pakpour, and President of the Supreme Disciplinary Court for Judges, Hossein-Ali Nayeri, architected a tentacular organ harvesting and trafficking network, which, it has been alleged, has bullied young mothers to abandon their newborns, for a pittance, so they could be sold for parts. If confirmed such abuses fall under the category of crimes against humanity.

Speaking under cover of anonymity, Setareh Ali, a lawyer turned rights activist from Tehran, the capital, explains how IRGC has systematically abused the power it wields in the Islamic Republic, to squeeze a profit and guarantees that its men are handsomely rewarded for their loyalty to the Leadership. “I was tipped off by a family member who is IRGC – not everyone working for the regime supports the regime by the way, quite often Iranians will feign loyalty to survive. We discovered that since 2020 IRGC has used the mobile hospital units set up during the Covid-19 pandemic to harvest organs illegally, and have proper deniability.

The list of their victims is long: political dissidents, petty criminals in local jails, homeless people … and babies! IRGC has bought babies from desperate mothers so they could harvest their organs and never have to justify their provenance. Not that they must justify what they are doing, but to target the most vulnerable, especially before they appear on the government database, simplifies their task.

Hospital staffs are much too afraid to say anything, and many doctors have been paid, threatened or both. It’s incredible what people can overlook to protect their loved ones. The regime in Iran is unforgiving. Leaking information on government’s abuses is tantamount to a death sentence, so we must take precautions and take the risk of not being heard or believe for a lack of hard evidence.”

If Setareh’s claims are, for now at least, just that: claims, her tale certainly echoes that made by others in media well known for exposing the regime’s egregious human rights violations.

It reads: “Sources in Iraq have confirmed this week that high ranking IRGC officers have made fortunes selling organs to Iraq – mainly kidneys, playing into an abominable human trafficking network.”

“If news of such practices is not exactly new, Iran is well known among the international community for having legalised the sale of organs under the provision that donors consent freely and knowingly, it appears now that the regime’s men are coercing Iranians to give up ‘body parts’ to turn a quick profit.”

Ms Ali who has worked extensively on human trafficking cases in Iran believes that organ harvesting is but an extension of such activities – yet another tool, the regime’s men have exploited to amass more wealth and exert control communities outside the regime of sanctions.

“Organ harvesting and human trafficking are forms of modern-day slavery,” she posits.

As a strong advocate against such heinous crimes, the UK, one would expect, ought to challenge Iran on such activities and make any further negotiations towards normalisation contingent to ending such abhorrent human rights abuses. One would be inclined to label such crimes as crimes against humanity.

In March 2015, the UK signed the first international legally binding document to address the issue of organ trafficking from a criminal law viewpoint – the Council of Europe Convention against Trafficking in Human Organs. The treaty invites governments to criminalise trafficking in human organs, and to take measures to protect victims.

“IRGC is immune to all and any criticism. Our so-called elected officials have no powers against the group. Government officials are actually quite subservient to IRGC and that means that its men can pretty much do whatever they want without ever being challenged, stopped, or rebuffed,” notes Ms Ali in further comments.

The Rise of a System

Since 1988 the Islamic Republic of Iran has been the only country in the world to have legalised living non-related donation (LNRD) of kidneys – a fancy phrase for paid organ donations; a move, it has long defended as pragmatic and lawful by Islam’s strict moral standards.

In Iran’s own words its unique system saved countless lives by making it possible to align both supply and demand – for a price of course: usually around $4,500, without the never-ending pain of being put on a waiting list.

If the process is arguably both simple and efficient – each donor is asked to register onto a database to then be matched to a patient, all of course under the watchful eye of a state-regulated body, abuses have been many, and depending how one wishes to look at it, grave. Rather interestingly for example human leucocyte antigen (HLA) matching of tissues, necessary to improve the chance of graft survival and prevent host rejection, is not routinely performed.

Beyond the questionable medical integrity of Iran’s transplant system, lies a trade which, for a lack of robustness, has allowed for the establishment of a shadowy organ trading sector, whereby doctors and powerful actors have played brokers, to procure their ‘clients’ the service they so desperately require – both nationally and internationally. And though government specifically forbids doctors or any third party to directly draw a profit from the sale of kidneys, or any other organs/tissues for that matter, reality has proven to be rather different.

Healthcare professionals in Iran, albeit under cover of anonymity, attest that IRGC is committing egregious human rights violations, by forcing certain groups/demographic to undergo organ transplant surgeries and/or to submit themselves to a series of test – data collection to then allocate organs.

Such procedures are done without consent or proper understanding of patients in contradiction to all international norms.

While it is impossible to establish the extent of the network or trace the movement of funds since transactions are performed using either cash, hawala or cryptocurrencies – Ethereum being a favourite as it is convertible into cash (fiat money) or other crypto, a lack of data cannot justify inaction.

If we consider that back into 2017 a report by Global Financial Integrity established that organ trafficking generated between $840 and $1.7 billion in revenues, one can understand IRGC’s keen interest in getting a slice of that pie.

At a time when Iran is cracking under a strict regime of financial and political sanctions, it appears evident that organised crime – and in this particular case, state-organised crime has expanded its activities, looking into more and more innovative ways to bypass restrictions.

“It’s virtually impossible to know how many babies have been bought by IRGC organs traffickers – but we know already that reports of similar activities in Iraq, Syria, Lebanon, and Yemen have surfaced – exactly within IRGC territorial jurisdiction. I don’t believe this to be a coincidence, this is a pattern the international community is intent on ignoring so it could go about negotiating its nuclear deal. The regime does not care for laws, regulations, and treaties. How often must the Leadership commit abject crimes for the world to believe the regime to be heinous,” stresses Ms Ali.

While it’s unlikely the Islamic Republic will ever be forthcoming when it comes to data collection, let alone admit that its IRGC is party to potential crimes against humanity, patterns of behaviour and previous investigative work allow us to reasonably assume that such testimonies are solid enough to warrant attention.

In December 2021 Borgen Magazine published findings pointing to a sharp increase in human trafficking activities in Iran against women and children.

It also notes, “In spite of existing laws prohibiting human trafficking in Iran, the issue continues. In 2004, Iran adopted the Law on Combating Human Trafficking, which “prohibits trafficking in persons through the use of threats, force, coercion, abuse of power or of a position of the vulnerability of the victim for purposes of prostitution, removal of organs, slavery or forced marriage.” The punishment for the crime of trafficking “is up 10 years’ imprisonment.””

Ms Ali asserts that she collected enough testimonies to confidently affirm that IRGC, under the cover of its powerful patrons, is buying new-born babies and children for a reported $300 – a fortune for most people in Iran, so their organs could be sold to the highest bidders.

She claims that the new IRGC mobile hospital the government set up in the province of Kermanshah which comes equipped with various facilities and wards, such as emergency rooms, pharmacy, intensive care unit, laboratory, and radiology department, has been used to harvest organs illegally.

The IRGC Ground Force would have used three field hospitals in the south-eastern province of Sistan and Baluchistan, one of the regions hit the hardest by the outbreak of the new Indian variant of coronavirus, to such aims as well.

Just as US President Biden is set to visit the Middle East and discuss the Iranian dossier with both Saudi Arabia and Israel, it would be useful to remember what it would entail to engage Tehran without holding its leadership accountable for the many crimes it continues to commit.

For a party who claims to be a legitimate peace broker, Tehran has systematically been party to Terror, human rights abuses, foreign meddling, and now organised crime – notwithstanding its pursuit of a nuclear weapon.

Countries such as the UK have legal responsibilities to uphold.

About the Author
Catherine Perez-Shakdam - a Research Fellow at the Henry Jackson Society and former consultant for the UNSC on Yemen as well an expert on Terror and Islamic radicalisation, Catherine is a well-known political analyst. Raised in a secular Jewish family in France, Catherine found herself at the very heart of the Islamic world following her marriage to a Muslim from Yemen. Her experience in the Middle East and subsequent work as a political analyst gave her a very particular, if not a rare viewpoint - especially in how one can lose one' sense of identity when confronted with systemic antisemitism. Determined to share her experience and perspective on those issues which unfortunately plague us -- Islamic radicalism, Terror and Antisemitism Catherine also will speak of a world, which often sits out of our reach for a lack of access.