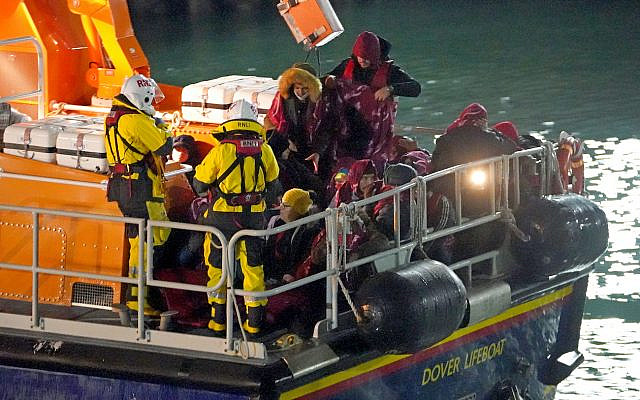 A group of people thought to be migrants are brought in to Dover, Kent, by the RNLI, following a small boat incident in the Channel after 27 people died yesterday in the worst-recorded migrant tragedy in the Channel. Picture date: Thursday November 25, 2021.

In the family folklore Grandpa Albert came from Vitgifnoie, a suburb of Warsaw in Poland. Only I discover Vitgifnoie doesn’t exist, though Grandpa was certainly a Polish emigrant in about 1880. If he hadn’t emigrated I would  probably be a Holocaust statistic, but then the country is full of descendants of immigrant families who have benefited from the values of our great country.

The descendants of the Vikings are to be found in Yorkshire, Leicestershire, Nottinghmshire and Lancashire. The Normans conquered the country but never amounted to more than 2% of the population. The Flemings arrived in the 14th century and weren’t sent to Rwanda. Instead the citizens of Pembrokeshire were thrown out of their homes and the Flemings took their place. They were weavers and also brought the wool trade to Scotland.

After Louis XIV revoked the Edict of Nantes in 1685, over 50,000 Huguenot Protestants came to Britain and another 10,000 to Ireland. What did they bring to Britain? Weaving, feather and fan work, high quality clock making, wood carving, paper making, clothing design and cutlery manufacture.

We also benefited between 1800 and 1945 with the arrival of 1.5 million immigrants from Ireland, 220,000 Jews and 40,000 Italians (great restaurateurs). All of whom had descendants, of course. There are about 1.5 million Indians now as well.

What a fabulous temple in Neasden.

Are we, however, going to run out of land? Could we finish up having to build only skyscrapers? A sigh of relief because the population lives on 6% of the land of Britain (Sheffield University figures) and the rest is rural.

Well, what about this vast number of immigrants for whom we are told we don’t have the school places, the housing, the jobs or the doctors? In 2020 268,000 immigrants came to this country. A major problem? But 300,000 Brits emigrated! (Home Office figures). Net loss 32,000.

Besides the numbers, there is the question of our values. We believe that others should adopt them. Logically, they have to be taught them and in 2021 we passed out 428,000 Study Visas. Well over 100,000 (32%)  were given to Chinese students. I can see a great future for pubs in Mongolia.

Frankly, though, it would be base ingratitude on my part, to approve of the people crossing the Channel being sent to Rwanda. They didn’t send Grandpa and he helped establish the tailoring industry in this country. Mind you, it would have improved my Rwandan Kinyarwanda, which I have to confess I don’t speak very well.

There is one argument which cannot be denied. The boat people don’t have to come to Britain. They have crossed other countries to reach the Channel. They could have stayed in France but they chose to come here. Which just proves how intelligent they must be; roast beef must be better than frogs legs.

There are also so many examples of Britain benefiting from immigrants. Eurobonds, the idea of German refugee, Sigmund Warburg, the Mini which was the concept of Turkish immigrant, Alec Assigonis. There was the American Charles Yerkes, who arrived here in 1900 and developed the London Underground and Michael Marks from Belarus, who started Marks and Spencer.

Alright, there are crooks who swindle a lot of the immigrants; put them in jail and throw the key away. There are tragedies which must be avoided, there are any number of chauvinists who don’t like strangers of any race, colour or creed. There are also the facts – and the fact is that immigrants are usually the cream of a poor nation’s crop. Those who are not content to suffer all their lives, but are determined to do something about it.

Life wasn’t easy for Grandpa Albert, but I am very grateful to him. Is it really fair to deprive others of the same chance?