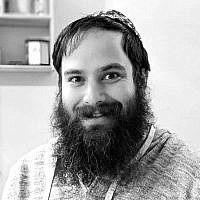 The Blogs
Dovber Chaiton
Apply for a Blog
Advertisement
Please note that the posts on The Blogs are contributed by third parties. The opinions, facts and any media content in them are presented solely by the authors, and neither The Times of Israel nor its partners assume any responsibility for them. Please contact us in case of abuse. In case of abuse,
Report this post.

Recently, it was reported that Israeli visitors to Auschwitz declined by 21% in 2018 from 2017. Looking to inspire discussion among my students I wrote this fact on the board and added the word “discuss”. I was excited when a student immediately threw his hand up. I closed my eyes and inhaled the sweetish air (it was early in the day) of my middle-school classroom as I imagined the pearls of wisdom about apathy and jadedness that were about to come rolling off his millennial tongue. I was brought back down to earth with a thud when I heard that famous middle-school question “Is it for homework?”

I decided to kick the discussion off with a “well, what do you guys think?”. The opinions were obviously slow in coming, this was in stark contrast to our previous less weighty discussion of, “would you rather be without wi-fi at home or without running water?”. The general consensus was that my students would be far more bothered to come home to no wi-fi than to come home to no running water. Yes, kids these days would rather share a bathroom than have to share wi-fi. Be that as it may….

Teaching the Holocaust in middle school is always a tricky matter. What should be taught and what should be left to be taught in later years? How should it be taught?

I was not necessarily looking to delve into a discussion about the Holocaust but more a discussion about general apathy towards Judaism. One brave student raised his hand and gave an answer that was as honest as it was scathing. It was not said in comedic jest nor out of cheek, it was a simple truth, “I think people would rather play Fort Nite then visit Auschwitz”.

Granted that the statistic of visitors who declined to visit Auschwitz was not purely made up of millennial tweens and teens or avid Fort Nite players but Fort Nite is simply a place holder for all the stuff that is grabbing the attentions of the young and old of this generation. The attention of tweens and teens  has been captivated by a hubbub of technology and mind grabbing lights, cameras and action. The ills and virtues of society as a whole is always far more pronounced in a school setting but usually symptomatic of where the blessings and curses of society at-large lie.

Like, Rabbi Sholom Dov Ber of Lubavitch once said that there is a very fine line between spiritual frigidity (krirut) and actual denial of Hashem (apikorsut). So, as I enjoy wi-fi and running water I wonder, is the apathy and frigidity towards Judaism and Jewish values displayed in the declining numbers of Auschwitz visitors possibly strengthening, G-d forbid the hands of the deniers.

About the Author
Dovber Chaiton was born and raised in Johannesburg, South Africa. After matriculating, he went on to study for a further 3 years at Yeshivat Beis Dovid in Qiryat Gat, Israel. After receiving smicha from the Rabbinical College of America in Morristown, New Jersey, he settled in Los Angeles with his wife and children, he is a teacher at the Emek Hebrew Academy and offers insight on Jewish education with a unique brand of humor.
Related Topics
Related Posts
Comments