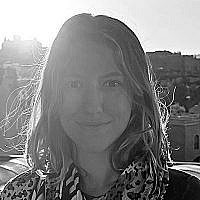 The Blogs
Aviva Safir
Apply for a Blog
Advertisement
Please note that the posts on The Blogs are contributed by third parties. The opinions, facts and any media content in them are presented solely by the authors, and neither The Times of Israel nor its partners assume any responsibility for them. Please contact us in case of abuse. In case of abuse,
Report this post.

I grew up in an “ultra-Orthodox” community, and I went to your typical Bais Yaakov school. I didn’t have your typical family, so naturally I questioned rabbis and Torah more than my friends did. I spent a year in seminary where I found my faith again restored, and many of my questions were answered. Furthermore, even if I didn’t know the answer, I had faith that somewhere out there is a satisfying explanation. Still, one question that always tugged at my integrity was, why did Rabbis create the blessing “He did not make me a woman”?

“Men have more mitzvot.” I don’t think that explanation truly resonates with any
modern-day Orthodox woman. It’s true we have our own self-worth based on the numerous sayings such as “In the merit of women, the redemption will come,” as well as the kabbalistic sources that teach us we are more connected to God then men as the basis for the reason why we don’t have so many mitzvot. I found that Judaism honors women more than any other society, or perhaps more than we honor ourselves. Women’s Day in Judaism is once (sometimes twice) a month. There are so many examples throughout the scope of Torah that proves that women are indeed more than equal, to say the least. But still, how do I justify the connection between all that knowledge against the prayer, “Thank you God for not making me a woman.”

You see Jewish religious prayer is a form of meditation through affirmations. You
transform yourself through repetitious thoughts, sounds or words. In linguistic terms you may classify this as a “speech act.” The “Speech Act Theory” was defined by J.L. Austin in 1975 in his book, “How to Do Things with Words.” In basic English, humans have this unique facet of language where words or sounds can be equivalent to actions. For example, “We find the defendant guilty.” So how does this clarify the blessing, “Shelo Asani Isha?”

It begins with the blessing “She’lo Asani Eved.” “Blessed are you God, the Source of all blessing, the All-Powerful God, King of the whole world, You did not make me a slave.” The word for “made me” is Asani. using the same words from Eyin Shin Nun translated to smoke. The smoke at Har Sinai refers to space/time/soul – Olam (Ayin), Sha’a (Shin), Nefesh. Depending on the nusach you daven, just two blessings before, the the words “She’Asa Li Kol Tzarchi” are used. Even if you pray in a different order, you can still ask, why did the Rabbis choose to change the format from positive to negative? Why did they specifically choose to use the words “She’lo Asani” and not instead “that made me a free man, that made me a Jew, that made me….a man?

What is smoke, and why did I point it out? Have you ever stared at the Havadala candle after it goes out and watched what was left of the great torch rise up ever so whimsically and mysteriously? As it dances, you wonder where is it going, what is it made from? You try to grasp it, but it alludes you. When fire burns an object, not everything is actually burned, or combusted. When you see smoke, you are looking at a collection of these tiny, unburned particles. On their own, you cannot see the particles. Like everything else, when they come together, you see a bigger picture. Smoke is toxic, unlike its source that can be used for good or bad, smoke serves only to do harm. Thus, we can understand, when the fire of God comes down, the smoke, the toxicity, of the world will rise and disappear.

“She’lo Asani Isha/Eved/Goy.” We have established that Rabbis have used a unique
word to connote that some aspect of these blessings imply a transformation, or a purification, if you will. Before we say “She’lo Asnani Eved” what are we? We are nothing. We started with the basics: sight, balance, clothing, land under our feet, good posture, shoes, strength. We started with our basic, physical forms, and now we are ready to transcend. We declared in those blessings that God is the source of some of our basic assets. So much so that even a blind person has to say, “who opens up the eyes of the blind”. But when we talk about transcending, nothing is a given.

We must choose, as we did leaving Egypt, who or what we want to serve. When we say we were not made a slave, we are in effect choosing to be of servitude, and we chose it on our terms. In Judaism there is no shame in servitude, only to what you choose to nullify yourself to, do we reflect upon. As we go on the journey of the self, and we establish healthy nullification, only then can we ask ourselves who is like minded? Who is my community, who do I identify with? God did not put me into a community, but I chose it. I chose to be part of a group who acts as a nation in service to our Creator. And finally, even within the framework of my community I
strive to go higher.

God did not make human beings forced to choose good. He gave us choice so that we
have ownership over our lives. In economics the terms Ownership and the ‘Endowment Phenomenon’ are used to show that when customers have a sense of ownership, they are less likely to let go. Those in the field of education are also familiar with the term ‘student-choice’ as a drive for higher motivation in academics. Again, and again this concept of framing life as a choice, is appearing across all fields of research. How we didn’t see this before, is a sign of the
transcending times.

God didn’t make us a woman, but we choose it. The attributes of the woman are detailed in Kabbalah and chassidus, as well as more implicitly in the Talmud and written text. To acquire the traits of a woman is to transcend, to elevate, to sanctify yourself. The question is, can you get any higher than a woman?