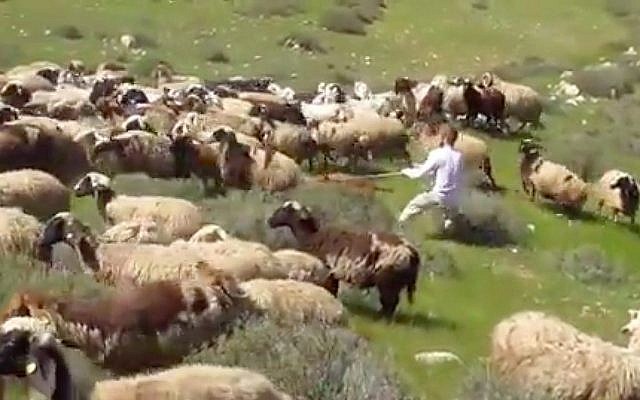 Illustrative: Ta'ayush activists film a settler siccing his pit bull on the sheep of a Palestinian shepherd, which he claimed had encroached on his land. (Screen capture/Ta'ayush)

This week’s haftarah concludes with one of my late father’s favorite verses, “It has been told you, O human, what is good, and what Adonai requires of you:  Only to do justice, love loving kindness, and walk humbly with your God.” (Micah 6:8).  The people ask “Would Adonai be pleased with thousands of rams, with myriads of rivers of oil? Shall I give my first born for my transgression, the fruit of my body for my sins?”  (6:7).  While the prophets never cancel the sacrifices, they know that all the sacrifices in the world are less important than doing justly.

God seems to intimate that it isn’t really so difficult.  God sent us the triumvirate of Moses, Aaron and Miriam to show us the way (6:4)  Yet, one of the most frequently heard sayings when we want to avoid plain moral truth is “it’s complicated.”  Sometimes it is, but often it really isn’t, unless we make it complicated.

This week I heard yet another story of a single parent mother being told that, no matter what her financial situation, she isn’t eligible for rent assistance if she is receiving alimony.  Already a year ago, government lawyers issued a scathing report on this practice.  For years we have known that we have one of the lowest percentages of public housing of any OECD country.  Yes, we have many financial constraints. We have defense needs that not every OECD country needs to worry about.  “It’s complicated.” But, is it really so complicated to understand that we have a basic obligation to insure that every human being in our society, or under our control, has a roof over their head?

On Sunday, I watched a new settler outpost being built before my eyes.  This is the area I have written in the past, because the police have done nothing as settler shepherds caused Palestinians to lose thousands of shekels by bringing their flocks into planted areas.  It was too complicated to stop them.  Emboldened, the settlers decided to go one step further.   The army told me that they were dealing with it, but couldn’t say when or how.  No doubt, “it’s complicated.” Is coveting, theft, and trespassing really so complicated?

Micah’s wrath is particularly directed against the wealthy and powerful who exploit the poor and defenseless.  Whether it be the Israeli Jewish single mother in need of affordable housing, or the Palestinian trying to reap what he as sowed, we have been told what God requires of us.

If we would put the effort we put into muddying the waters and exploiting grey areas into finding the way to act justly, love loving kindness and walking humbly with God….

It wouldn’t be so complicated.